Nicola Sturgeon says 'the BBC should be accurate'

The SNP’s Nicola Sturgeon, Douglas Ross of the Scottish Conservatives, Anas Sarwar of Scottish Labour, Willie Rennie of the Liberal Democrats and the Green Party’s Patrick Harvie will take part. Each of the five party leaders will make their final pitch to Scottish voters before the country goes to the polls in two days’ time. But Scotland’s former First Minister Mr Salmond, who is leading his Alba Party into the election, has not been invited to take part in the televised debate by the BBC, according to a report from Politico.

In response, he posted two pictures to his Twitter account on Monday evening, which shows the party’s logo projected onto the broadcaster’s headquarters in Glasgow.

Alongside these images, Mr Salmond wrote: “Beam us up Scotland! #AlbaRising.”

The BBC previewed tonight’s final live and televised Scottish election debate, and attempted to explain why leaders of “smaller parties” are not taking place.

This said: “The BBC considers a number of factors when deciding who takes part in its TV election debates. 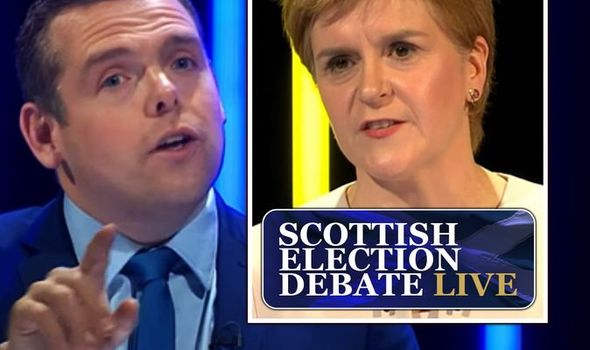 “One of those factors is based on previous and current electoral support. For example, the parties featuring in Tuesday’s broadcast had MSPs elected to Holyrood in 2016.

“They also have elected representation in other chambers, such as local councils and at Westminster.

“Ahead of an election the BBC issues a set of guidelines, which can be found here.

“They are general rules outlining how the broadcaster will cover things like day-to-day campaigning and debates. 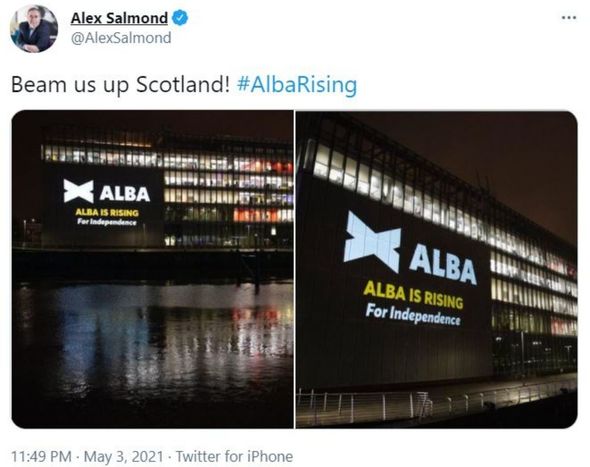 “Although the leaders of smaller parties will not appear in this live television event there will be impartial and proportionate coverage of their campaigns in the coming weeks.

“A special broadcast of BBC Scotland’s The Campaign programme, featuring other parties, will air on BBC One Scotland and the BBC News Channel from 19:00.”