The company has made it part of their brand to “help protect and advance the rights of all those seeking a safe place to call home”. However, some political commentators and social media users believe the US ice cream manufacturers should stay away from UK politics.

Darren Grimes, political commentator and broadcaster, blasted the ice cream company for its comments on the UK’s immigration policies.

He re-shared a social media post by Ben & Jerry’s which read: “The UK Home Office is cruelly locking up thousands of people as part of their nightmare system of immigration detention.”

Mr Grimes responded: “Does anyone else just want uber-woke multinational ice cream giants to stay away from politics and stick to making overpriced ice cream?”

The ice cream company has chosen to take a stance on several political issues, including fighting racism in the US. 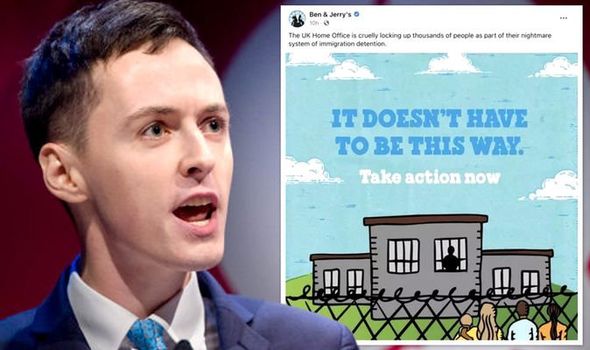 In an op-ed on the company’s website earlier this year, Ben & Jerry’s Chief Executive Matthew McCarthy urged “other CEOs and business leaders to use our unique power and privilege to help [the US] begin to heal”.

In the piece, Mr McCarthy was supporting US legislation that would study the possibility of paying reparations to descendants of enslaved people in America.

According to the Wall Street Journal, Mr McCarthy said: “One of the questions I get most often is, aren’t you afraid of alienating consumers by the stands that you take at Ben & Jerry’s? It’s the exact opposite.”

Mr Grimes urged his 147,000 followers to not buy the ice cream products after their political comments. 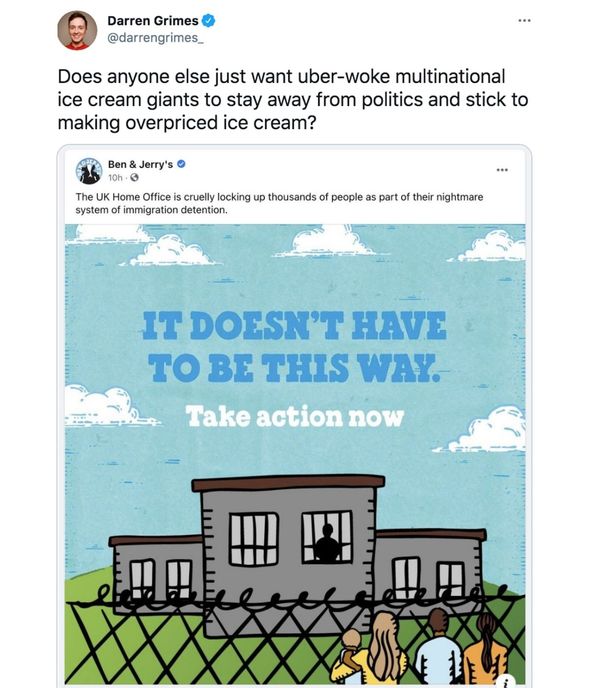 He tweeted: “We should vote with our feet folks and stop buying the products of those who do not wish our nation well.”

However, some social media users disagreed with the political commentator.

One Twitter user wrote: “I think it’s good to have a cookie dough ice cream that tastes delicious & cares about the poorest & most vulnerable people in our society.”

Another user posted: “Ben & Jerry’s have always politically campaigned from day one the Company was set up [sic].

“Even now it’s owned by a multi national conglomerate, it’s great to see its original ethos is allowed to operate. If you don’t like it don’t buy it.”