WASHINGTON — Within hours of the Supreme Court accepting a case that could lead it to overturn or scale back a landmark abortion rights ruling, Senator Michael Bennet, a Colorado Democrat facing re-election next year, issued a dire warning to supporters: The fate of Roe v Wade is on the line.

“We cannot move backwards,” Mr. Bennet said in a campaign statement. “Colorado was a leader in legalizing abortion — six years before Roe v Wade. I will always fight for reproductive justice and to ensure everyone has safe and legal access to the health care they need.”

His declaration was among the first in a quickly intensifying clash over abortion, long a defining issue to many voters but one likely to gain additional prominence as the court weighs the possibility of rolling back the constitutional protections it provided to abortion rights in Roe 48 years ago.

Motivated in part by a belief that the Supreme Court will give them new latitude to restrict access, Republican-dominated states continue to adopt strict new legislation, with Gov. Greg Abbott of Texas signing into law on Wednesday a prohibition on abortions after as early as six weeks. The law, sure to face legal challenges, is one of more than 60 new state-level restrictions enacted this year, with many more pending.

With the Supreme Court ruling likely to come next year — less than six months before midterm elections that will determine control of Congress and the future of President Biden’s agenda — the court’s expanded conservative majority has injected new volatility into an already turbulent political atmosphere, leaving both parties to game out the potential consequences.

Republicans had already shown that they intended to take aim at Democrats over social issues, and abortion will only amplify the culture wars.

Nearly all agree that the latest fight over Roe, which has been building for years, is certain to have significant political repercussions. Conservative voters are traditionally more energized than liberals about the abortion debate, and for many of them it has been the single issue spurring voter turnout.

But Democrats, likely to be on the defensive given their current hold on the White House and Congress, say a ruling broadly restricting abortion rights by a court whose ideological makeup has been altered by three Trump-era appointees could backfire on Republicans and galvanize women.

“Outlawing Roe would create a backlash that would have critical unintended consequences for those who would like to repeal it,” said Senator Jeanne Shaheen, Democrat of New Hampshire and a leading voice in Congress for abortion rights. “The women of the country would be very upset, particularly young women, that there would be such a deliberate effort to limit women’s access to reproductive choices.”

Those on the right, already anticipating a favorable ruling given the conservative tilt of the 6-3 court, say they expect liberals to seize on the issue to try to “scare” voters. But they believe they can make a case for “reasonable” abortion limits.

“This is clearly going to invigorate people on both sides of the debate, but this is a winning issue for pro-life candidates,” said Mallory Quigley, a spokeswoman for Susan B. Anthony List, a conservative nonprofit.

She said she did not expect conservative voting enthusiasm to ebb if the right triumphed at the Supreme Court, an outcome that would bring to fruition years of emphasis on electing anti-abortion lawmakers at the federal and state levels and working aggressively to confirm conservative judges.

“What happened on Monday is evidence that elections have consequences,” Ms. Quigley said, referring to the Supreme Court’s decision to take a case about a Mississippi law that seeks to ban most abortions after 15 weeks of pregnancy — about two months earlier than Roe and subsequent decisions allow. 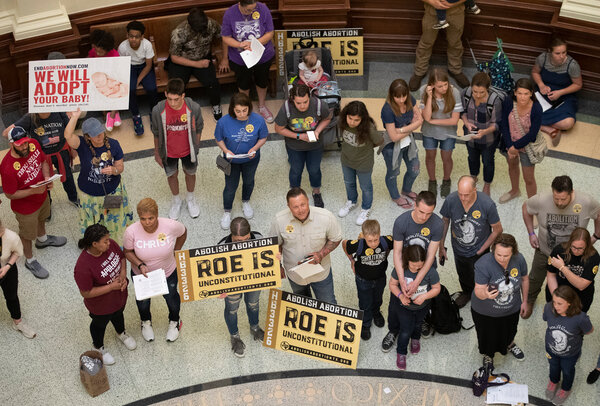 The Supreme Court action may have political ramifications before next year. The case is likely to be argued weeks before Virginia voters head to the polls in November to elect a new governor in a race often seen as a midterm bellwether. Terry McAuliffe, a former governor and most likely the Democratic nominee, is eager for another political battle over abortion rights, rattling off his record protecting clinics in the state and vetoing legislation that would impose restrictions.

“This is going to be a huge motivator,” he said in an interview. “In 2013, I promised women I would be a brick wall to protect their rights. And I will be a brick wall again.”

Senator Rick Scott of Florida, the chairman of the National Republican Senatorial Committee, downplayed the potential effect of the court ruling, though he said that as an abortion opponent he welcomed the court taking up the case. But Mr. Scott said he believed voters would be more persuaded by what he described as the Biden administration’s failings on issues such as immigration, the economy, taxes, inflation and more.

While the lines have always been starkly drawn on abortion into the pro and anti camps, public opinion has proved more nuanced, with a clear majority backing Roe but majorities also favoring some limits. How the Supreme Court comes down on the fine points of abortion law could determine how the issue plays in the elections.

“Considering the decision will likely be made five months ahead of the election, and depending on the decision itself, it’s too early to measure its ultimate impact on the midterms,” said Nathan Gonzales, the editor of the nonpartisan Inside Elections. Mr. Gonazales said it could conceivably energize Republicans but also pay benefits for Democrats — a view shared by others.

President Donald J. Trump helped inspire record turnout last year from Democratic voters, who were eager to reject his administration. With Mr. Trump no longer on the ballot, many Democrats say the Supreme Court case could provide crucial midterm motivation, particularly for suburban women in swing districts who were instrumental in Democratic wins last year.

Katie Paris, the founder of Red, Wine and Blue, a group focused on organizing suburban female voters for Ohio Democrats, said the Supreme Court news immediately touched off alarm on the Facebook groups and other social media channels run by her organization.

“When the news came out that this was going to be taken up, it was like, ‘Everybody get ready. This is real,’” she said. “We know what this court could do, and if they do it, the backlash will be severe.”

Tresa Undem, a pollster who specializes in surveys on gender issues, said that abortion rights would continue to be an effective cause for Democrats because voters link it to larger concerns about power and control that motivated female voters during the Trump administration.

“Democrats and independents have felt a loss of control and power from people at the top,” said Ms. Undem, who has conducted polling for several abortion rights organizations. “Now you have six individuals who are going to make these decisions about your body in this personal area that will affect the rest of your life.”

Mr. Bennet said he could not predict the political implications of the court taking on abortion, but he wanted to alert his supporters that something of consequence was at hand.

“There are a lot of people who have worked for a long time to overturn Roe v. Wade, and that is what is at stake,” he said. “I think people needed to hear that in the wake of the Supreme Court taking this case from Mississippi.”