MCGUIRE AIR FORCE BASE, N.J. — The three airmen sat quietly adjusting their headsets, murmuring to their colleague, who was in distinct trouble. “Everyone goes through rough patches sometimes,” each said, a few moments apart, to the same despondent and mildly intoxicated man, whose wife recently left him and who seemed immersed in suicidal thoughts.

The airman on the other end of the headsets was virtual, but the conversation was all encompassing, a 30-minute, occasionally harrowing journey among three actual airmen and a virtual actor, whom they each tried to coax into getting help.

The three were trying out a new virtual reality program this month that the Air Force is using to target two problems that continue to vex military leaders: suicide and sexual assault within the ranks. Years of prevention training — often in the form of somnolence-inducing PowerPoint presentations — have done little to stem the rates of either problem.

Whether the virtual reality model can ultimately do better remains an open question. But military officials are encouraged by the early self-reported responses to the training.

Over 1,000 Air Force personnel have participated in the training so far; 97 percent of those who tried it would recommend it, and trainees reported an increase in the likelihood to intervene with a person in crisis, Air Force officials said. And among those ages 18 to 25 — a generation more used to interactive virtual experiences that makes up the bulk of new recruits — the impact increased sevenfold. Officials intend to train at least 10,000 airmen with the program this year.

The training is meant to take on problems that, if anything, have worsened in the military in recent years. Between 2014 and 2019, the suicide rate for all active-duty troops increased from 20.4 to 25.9 suicides per 100,000 according to Pentagon data; in the last three months of 2020, suicides among National Guard troops nearly tripled to 39 from 14 over the same period the prior year.

In 2019, the Defense Department found that there were 7,825 reports of sexual assault involving service members as victims, a 3 percent increase from 2018. 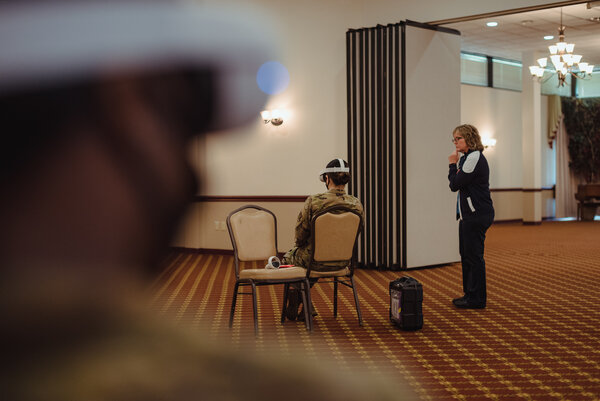 One of the few effective tactics for both problems, experts say, is intervention by bystanders. They may witness harassment in a bar, for instance, or increasingly alarming messages on social media representing a suicide threat.

In the military, intervening, especially against someone of a higher rank, can be culturally difficult, especially for younger recruits. “Barriers sometimes get in the way from people intervening,” said Carmen Schott, the sexual assault prevention and response program manager for the Air Force’s Air Mobility Command. “If someone is higher rank, you might be more timid to say something. The Air Force has put a lot of effort into making clear nothing negative will happen if you intervene.”

The aim of the virtual reality program is to act out scenarios with airmen in simulated environments. The technology allows the airmen to select from cues at the bottom of the screen to have an interactive “conversation” with a photo-realistic virtual actor, one whose facial expressions and reactions are meant to make the training more effective.

In this behavioral rehearsal, airmen learn what may be useful to say, such as asking their buddy if he has a gun in his house, and why some other responses — like “man up” — are not helpful. Participants get feedback on their “empathy” score and tips on how to improve in future encounters.

“Virtual reality training puts the user in a scenario, not in a classroom where you are zoning out and on your cellphone,” Ms. Schott explained. “You are an active participant. You have to be ready. I think that it is going to help airmen retain and remember knowledge. We don’t want people to feel judged. They may not make perfect decisions, but they will learn skills.”

Kevin Cornish, the chief executive of Moth+Flame, a virtual reality learning firm in Brooklyn, looked a little like an interloper on the Air Force base here, a casually dressed artist among uniforms. Mr. Cornish, who was working on Taylor Swift music videos when he became entranced by the immersive experience of a 360-degree camera used in one of them, said that there was “something so invigorating about somebody making eye contact and talking to you.”

He said he was increasingly seeing companies turn to virtual reality to simulate difficult work conversations and game out scenarios, especially around diversity and inclusion.

As the airmen took turns interacting with their suicidal virtual colleague via their headsets, some spoke quietly and a bit awkwardly, while others sounded like stage actors as they tried to persuade their fellow airman to hand over his gun and go with them to see a supervisor. Sometimes they would nod as they listened, or lower their voices or wipe a tear.

“I loved that it was hands-on,” said Annette Hartman, 23, a senior airman. “It was better than sitting through a briefing and waiting to sign off on a roster. Some of the responses I wouldn’t have thought to say, like, ‘Have you thought about suicide? Do you have a gun?’”

That type of experience is set to expand: Another bystander program, which will roll out in July will place the users in a bar, watching a scene of sexual harassment unfold.

“In an immersive experience, you get much closer to the feelings of a real story than you do with a computer screen,” said Nonny de la Peña, the chief executive of Emblematic Group and an early creator of virtual reality experiences. “We are starting to see that our world is not flat, and learning and experiencing and connecting is not going to be flat much longer.”