WASHINGTON — An hour before President Donald J. Trump announced in December that William P. Barr would step down as attorney general, the president began pressuring Mr. Barr’s eventual replacement to have the Justice Department take up his false claims of election fraud.

Mr. Trump sent an email via his assistant to Jeffrey A. Rosen, the incoming acting attorney general, that contained documents purporting to show evidence of election fraud in northern Michigan — the same claims that a federal judge had thrown out a week earlier in a lawsuit filed by one of Mr. Trump’s personal lawyers.

Another email from Mr. Trump to Mr. Rosen followed two weeks later, again via the president’s assistant, that included a draft of a brief that Mr. Trump wanted the Justice Department to file to the Supreme Court. It argued, among other things, that state officials had used the pandemic to weaken election security and pave the way for widespread election fraud.

The draft echoed claims in a lawsuit in Texas by the Trump-allied state attorney general that the justices had thrown out, and a lawyer who had helped on that effort later tried with increasing urgency to track down Mr. Rosen at the Justice Department, saying he had been dispatched by Mr. Trump to speak with him.

The emails, turned over by the Justice Department to investigators on the House Oversight Committee and obtained by The New York Times, show how Mr. Trump pressured Mr. Rosen to put the power of the Justice Department behind lawsuits that had already failed to try to prove his false claims that extensive voter fraud had affected the election results.

They are also the latest example of Mr. Trump’s frenzied drive to subvert the election results in the final weeks of his presidency, including ratcheting up pressure on the Justice Department. And they show that Mr. Trump flouted an established anticorruption norm that the Justice Department acts independently of the White House on criminal investigations or law enforcement actions, a gap that steadily eroded during Mr. Trump’s term.

The documents dovetail with emails around the same time from Mark Meadows, Mr. Trump’s chief of staff, asking Mr. Rosen to examine unfounded conspiracy theories about the election. 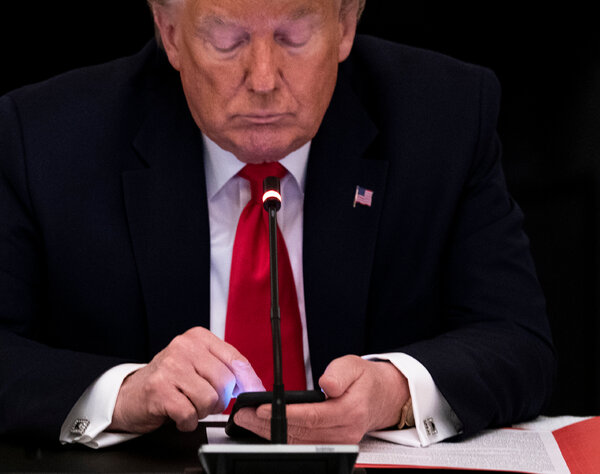 Much of the correspondence also occurred during a tense week within the Justice Department, when Mr. Rosen and his top deputies realized that one of their peers had plotted with Mr. Trump to oust Mr. Rosen and then try to use federal law enforcement to force Georgia to overturn its election results. Mr. Trump nearly replaced Mr. Rosen with that colleague, Jeffrey Clark, then the acting head of the civil division.

Mr. Rosen declined to comment. A spokesman for Mr. Trump could not immediately be reached for comment.

The documents “show that President Trump tried to corrupt our nation’s chief law enforcement agency in a brazen attempt to overturn an election that he lost,” said Representative Carolyn B. Maloney, a New York Democrat who is the chairwoman of the House Oversight Committee.

Ms. Maloney, whose committee is looking into the events leading up the Jan. 6 storming of the Capitol by a pro-Trump crowd protesting the election results, including Mr. Trump’s pressure on the Justice Department, said she has asked former Trump administration officials to sit for interviews, including Mr. Meadows, Mr. Clark and others. The House Oversight Committee requested the documents in May as part of the inquiry, and the Justice Department complied.

The draft brief that Mr. Trump wanted the Justice Department to file before the Supreme Court mirrored a lawsuit that Attorney General Ken Paxton of Texas had filed to the court, alleging that a handful of battleground states had used the pandemic to make unconstitutional changes to their election laws that affected the election outcome. The states argued in response that Texas lacked standing to file the suit, and the Supreme Court rejected the case.

The version of the lawsuit that Mr. Trump wanted the Justice Department to file made similar claims, saying that officials in Georgia, Michigan, Wisconsin, Arizona, Nevada and Pennsylvania had used the pandemic to unconstitutionally revise or violate their own election laws and weaken election security.

To try to prove its case, the lawsuit relied on descriptions of an election monitoring video that appeared similar to one that Republican officials in Georgia rejected as doctored, as well as the debunked notion, promoted by Mr. Trump, that machines made by Dominion Voting Systems had been hacked.

Eager to speak with Mr. Rosen about the draft Supreme Court lawsuit, a lawyer named Kurt Olsen, who had advised on Mr. Paxton’s effort, tried unsuccessfully to reach him multiple times, according to emails sent between 11 a.m. and 10 p.m. on Dec. 29 and obtained by the House Oversight Committee investigators.

Mr. Olsen first reached out to Jeffrey B. Wall, the acting solicitor general who would have argued the brief before the Supreme Court. “Last night the President directed me to meet with AG Rosen today to discuss a similar action to be brought by the United States,” Mr. Olsen wrote. “I have not been able to reach him despite multiple calls/texts. This is an urgent matter.”

Mr. Rosen’s chief of staff, John T. Moran, told Mr. Olsen that the acting attorney general was busy with other business at the White House. About an hour later, Mr. Olsen drove from Maryland to Washington “in the hopes of meeting” with Mr. Rosen at the Justice Department, the emails show.

When Mr. Olsen could not get through to Mr. Rosen or Mr. Moran, he called an employee in the department’s antitrust division, according to the documents.

While it is not clear whether Mr. Olsen met with Mr. Rosen, he provided more fodder for his case in an email sent later that night to Mr. Moran, saying that it was at Mr. Rosen’s request.

On the day that Mr. Trump announced that Mr. Rosen would be the acting attorney general, he wanted him to look at materials about potential fraud in northern Michigan, according to an email obtained by the committee. That fraud claim had been the subject of a lawsuit filed by the former Trump adviser Sidney Powell, who argued that Dominion voting machines had flipped votes from Mr. Trump to Joseph R. Biden Jr.

The state’s Republican clerk had said that human error was to blame for mistakes there that initially gave more votes to Mr. Biden, and a hand recount at the county level conducted in December confirmed that the machines had worked properly.

A federal judge threw out Ms. Powell’s lawsuit on Jan. 7, saying that it was based on “nothing but speculation and conjecture.” She has been accused of defamation in a lawsuit by Dominion in part because of the Michigan claims.