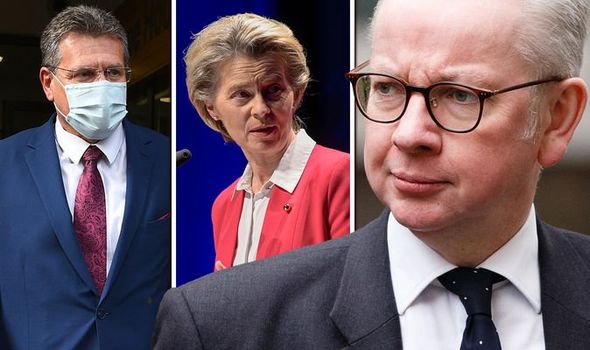 Brussels officials have triggered Article 16 of Brexit’s Northern Ireland Protocol in move that potentially restricts exports of Covid-19 vaccines from Europe into Northern Ireland. Michael Gove has contacted officials in Brussels to express the “UK’s concern over a lack of notification from the EU about its actions in relation to the NI protocol”.

A Downing Street spokesman said: “Michael Gove just spoke to European Commission Vice President Maros Sefcovic to express the UK’s concern over a lack of notification from the EU about its actions in relation to the NI protocol.

“Mr Gove said the UK would now be carefully considering its next steps.”

Stormont First Minister Arlene Foster branded the EU move an “incredible act of hostility” and called for a “robust response” from the UK Government.

Under the protocol, which formed part of the Brexit withdrawal deal, goods should be able to move freely between the EU and Northern Ireland as the region remains in the single market for goods and still operates under EU customs rules.

But the EU has triggered Article 16 so it can place export controls on this movement in respect of vaccines and frustrate any effort to use Northern Ireland as a back door to bring vaccines into the UK.

The move comes amid a deepening row over the allocation of the Oxford/AstraZeneca vaccine after the company announced delays to its EU operations.

The European Commission said: “Exports of goods from Northern Ireland to other parts of the United Kingdom cannot be restricted by EU law unless this is strictly required by international obligations of the EU.

“Therefore, movements of goods covered by this regulation between the EU and Northern Ireland should be treated as exports.

“Whilst quantitative restrictions on exports are prohibited between the Union and Northern Ireland, in accordance with Article 5 (5) of the Protocol on Ireland/Northern Ireland, this is justified as a safeguard measure pursuant to Article 16 of that Protocol in order to avert serious societal difficulties due to a lack of supply threatening to disturb the orderly implementation of the vaccination campaigns in the member states.”

Mrs Foster said: “By triggering Article 16 in this manner, the European Union has once again shown it is prepared to use Northern Ireland when it suits their interests but in the most despicable manner – over the provision of a vaccine which is designed to save lives.

“At the first opportunity, the EU has placed a hard border between Northern Ireland and the Republic of Ireland over the supply chain of the coronavirus vaccine.”

The regulation means Northern Ireland will be considered an export territory for the purposes of vaccine sent from the EU/the Republic of Ireland.

Northern Ireland’s vaccines arrive from the rest of the UK at present so those will be unaffected.

The DUP leader added: “With the European Union using Article 16 in such an aggressive and most shameful way, it is now time for our Government to step up.

“I will be urging the Prime Minister to act and use robust measures including Article 16 to advance the interests of Northern Ireland and the rest of the United Kingdom.”

The DUP has previously pressed the British Government to invoke the Article 16 mechanism because of disruption to the movement of goods between Britain and Northern Ireland.

A spokesman said: “We are aware of the issue and the Taoiseach is currently in discussions with Ursula Von Der Leyen to express our concerns.”