Home » Politics » What Does Joe Biden Owe to Black Communities?

What Does Joe Biden Owe to Black Communities?

“You’re going to win,” Mr. Holt said he told Mr. Biden privately, a political prophecy that was fulfilled in the coming days.

Now Mr. Holt, the pastor of one of Charleston’s largest Black congregations, has another message for Mr. Biden as he plans for his incoming administration: “Biden owes us. And we have not forgotten.”

Black voters have a political marriage of convenience with the Democratic Party. They are at once the party’s most solid voting demographic and deeply frustrated by the lack of systemic change its politicians have delivered for them.

In South Carolina, the state that helped propel Mr. Biden to the Democratic nomination and where about half of the Democratic electorate is Black, voters complain of receiving campaign promises from politicians while they are running but not being prioritized once they are elected.

There are similar grievances among voters in cities like Milwaukee, Detroit and Philadelphia, hubs of general-election campaigning in key swing states, who have grown used to the silence that follows presidential election years.

In their telling, attention quickly shifts to midterm races in gerrymandered, Republican-leaning congressional districts, and the Black voters who helped Democrats ascend to the White House are sometimes discarded. Their issues are too divisive. Their needs are too great.

Mr. Biden has insisted that this time will be different, and people like Mr. Holt are taking him at his word. Last month, in his victory speech after becoming president-elect, Mr. Biden cited Black voters specifically, alluding to those who rallied around him in South Carolina after his primary campaign flopped in other early-voting states.

“Especially at those moments when this campaign was at its lowest ebb, the African-American community stood up again for me,” Mr. Biden said. “You’ve always had my back, and I’ll have yours.”

But who defines political priorities for Black voters, and what does it mean to have their back?

Leading Black politicians, civil rights leaders, activists and many of the same South Carolina church leaders Mr. Biden leaned on to turn his campaign around all said in interviews that it was important to address the coronavirus pandemic. But they also raised issues that ran the gamut of liberal policy initiatives, from investing in small businesses and historically Black colleges and universities to tackling student debt and climate change.

Many also pushed back against the singular focus on racial representation that has dominated debates over Mr. Biden’s transition team and cabinet picks. Having a cabinet that reflects the racial diversity of America is good, they said. But they added that Mr. Biden’s legacy on race would be judged on his willingness to pursue policy changes that address systemic racism — a standard he has set for himself. 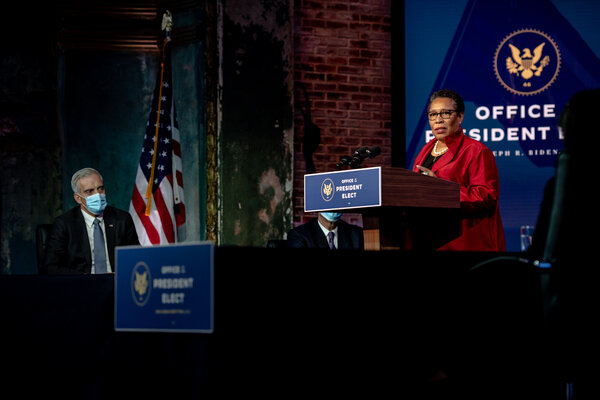 “What he’s got to do, in my opinion, is to depart from the tradition,” said Representative James E. Clyburn, the powerful South Carolina Democrat who is the highest ranking Black member of the House. “What is getting us in trouble in the past is when people get into office, they abandon the platform they ran on” in favor of appeasing Republicans, he said.

The Rev. Dr. William J. Barber II, co-chair of the Poor People’s Campaign, cited a commitment Mr. Biden had made during a public forum to prioritize eliminating poverty and addressing the concerns of poor people.

Live up to that, he said, and a cross-racial section of marginalized Americans, including Black people, will have their lives transformed.

In effect, they are asking President Biden to take a cue from candidate Biden. During the primary and general election, and under pressure from activists who cast Mr. Biden as an artifact of the political past, his team embraced a plan for Black Americans called “Lift Every Voice,” which would seek to close the Black-white income gap, expand educational opportunities, invest $70 billion in H.B.C.U.s and reimagine the criminal justice system and policing.

Mr. Biden’s selection of Vice President-elect Kamala Harris, the first Black woman on a major party ticket, was — with the campaign’s encouragement — taken as a symbolic affirmation of these commitments. Former President Barack Obama, the country’s first Black president, had to assure white America he would be a president for all races. But Mr. Biden repeatedly asserted that Black communities would get special attention in his administration.

Black political leaders believe that the biggest barrier to Mr. Biden’s commitment to address systemic racism is his own instinct for compromise, bipartisanship and deference to the idea of Washington civility. Mr. Biden has consistently restated his belief that congressional Republicans will work with his administration in due time, though some of them continue to cast doubt on the legitimacy of his victory and President Trump shows no signs of loosening his grip on the party’s base.

“Bipartisanship is how the president-elect and vice president-elect plan to get things done from Day 1,” said Ramzey Smith, a spokesman for Mr. Biden’s transition team. “They’ve made it abundantly clear that in order to combat the systemic inequities that Black Americans have faced for generations, it is imperative to work across the aisle and engage with all groups to reach a consensus that doesn’t compromise our principles or priorities.”

Some Black leaders who have met with Mr. Biden and Ms. Harris during the transition have been frustrated by this sentiment, according to several people familiar with the discussions. Mr. Biden, the leader of the Democratic Party, is one of the few Democrats left who believes that the Republicans who reflexively opposed Mr. Obama’s every action and have been slow to acknowledge Mr. Biden’s legitimacy are simply an aberration.

Leaders are asking him to consider unilateral action like executive orders to enact his agenda, claiming that Washington horse-trading has rarely prioritized the needs of Black communities. Mr. Biden has been steadfast: Republicans will come around.

“We will see if he’s right, and we’ll see very shortly,” said Sherrilyn Ifill, president of the NAACP Legal Defense and Educational Fund Inc., who has met with the Biden transition team. “If he’s not, we’ll also see it very shortly.”

She added: “It’s perfectly fine to be hopeful. But certainly you should be fully prepared to pivot and to be effective.”

Even vocal allies of Mr. Biden say his ability to rise to the standards he set for himself, particularly when it comes to racial equity and a Black agenda, may rely on his willingness to see Republicans as obstructionists to be overcome, not negotiators to be met at a midpoint.

Mr. Clyburn, whose well-timed endorsement of Mr. Biden in South Carolina helped ensure his dominance in the state, said Mr. Biden must learn from the mistakes made by previous Democratic leaders, including Mr. Obama.

He cited Mr. Obama’s Supreme Court nomination of Judge Merrick B. Garland, whom Republicans refused to even grant a hearing, as an example.

Republicans “lied to him and told him that if he put up a moderate, they will approve him for the Supreme Court,” Mr. Clyburn said. “They never did it and they never planned to do it.”

“I told them at the time that you will be better off putting up an African-American woman for the Supreme Court,” he added. “If you put up a Black woman, she would have an immediate constituency. Make them turn her down. He would have redefined politics in this country, and frankly I think Hillary Clinton would have been elected president.”

The Rev. Joseph A. Darby Jr., the senior pastor at Nichols Chapel A.M.E. Church in Charleston and a former leader of the local N.A.A.C.P., said he had been heartened by Mr. Biden’s cabinet choices, including that of retired Gen. Lloyd J. Austin III, who would be the first Black man to lead the Defense Department.

“Just having new folks at the table is helpful,” Mr. Darby said. “But it’s that plus the substance.”

The stakes could not be higher. Black people sit at the intersection of the year’s biggest policy priorities: access to health care, criminal justice and the climate change crisis. Black Americans have been ravaged by the coronavirus pandemic, dying, being hospitalized and facing economic devastation at disproportionate rates.

In Mr. Darby’s congregation, a mother and her child both died from the virus. Mr. Holt’s congregation hasn’t been able to convene since March, just weeks after Mr. Biden spoke from the pulpit as a candidate.

Last week, in an interview at his church, Mr. Holt made another of his patented political predictions: If Mr. Biden does not follow through on his promises to Black people — does not make eroding systemic racism a priority in deed, not just words — Republicans will make gains with Black voters.

He cited the modest shift toward Mr. Trump in November’s election among some Black voters and the increasingly nonpartisan nature of younger Black people. Those are warning signs, he said.

Some of Mr. Holt’s congregants, at a socially distant gathering in the sanctuary they hadn’t visited in months, echoed their pastor’s urgency. Though they expressed confidence in Mr. Biden and said they all voted for him in the primary and general elections, they framed their choice as a call for action rather than a blank check of trust.

“He can’t get stuck on healing hearts,” said Shakeima Chatman, 46, a real estate agent. “But he can institute policies and regulation.”

What gave them hope: that Mr. Biden was comfortable among Black voters on the campaign trail and the loyalty he showed to Mr. Obama as his vice president.

What worried them: that he favorably invoked segregationists in the name of bipartisanship, that he said Black people who did not support him “ain’t Black,” and that he told wealthy donors at a fund-raiser that “nothing would fundamentally change” if he was elected.

For Black communities, it must.

“Policies created these disparities,” said Cleo Scott Brown, who is 66. “Policy has to fix it.”