What ‘The Babylon Bee’ Thinks Is So Funny About Liberals

Four years ago, in the heat of the Republican primary, a fledgling satire site jabbed at the party’s leading contender: “Psychopathic Megalomaniac Somehow Garnering Evangelical Vote.” The story proceeded to describe Donald Trump as “a man who would seemingly have no qualms obliterating hundreds of thousands of people for purely egotistical reasons.”

This was not standard anti-Trump fare, though. The Babylon Bee, launched in March 2016, is a site made for churchgoing conservatives. It most frequently set its sights on the left: “Liberal Activist Explains Notion Of Tolerance To Man She Just Called A ‘Worthless [Expletive],’” went the typical headline.”

But when Mr. Trump was elected, months later, the outrage that his victory sparked quickly became a funnier punchline to the Babylon Bee than the man himself. Shortly after the election, the site’s writers joked that millennial protesters calmed down after they were given participation trophies; they wrote that a survey of the Women’s March participants indicated “100 percent of people marching on Washington were not aborted.”

Today, the Babylon Bee has built a fan base among Republican lawmakers and even in the White House.

Last month, Mr. Trump retweeted one of their stories. (“He does know it’s satire,” said the site’s editor in chief, Kyle Mann. “We are assured.”)

The Babylon Bee hasn’t stopped making jokes at Mr. Trump’s expense — the editors call this “writing in hard mode,” when they are sure to lose clicks and Twitter followers. One recent headline joked: “Trump Agrees To Remove Swimsuit Competition From SCOTUS Nomination Process.” But they’re more apt to jab at the other side: “Trump Adds ‘Black Lives Matter’ Sticker To SUV So Media Can’t Claim He’s Spreading COVID.”

Like many conservative commentators who once expressed disbelief or outrage at Mr. Trump, the Bee has found those criticisms easy to set aside, for the most part. What unifies its writers and readers is stronger: poking fun at the left.

“The things we see as most absurd, the bad ideas most deserving of ridicule tend to be ideas on the left,” said the site’s chief executive, Seth Dillon. “We’re not trying to be a fair, objective site that equally makes fun of everyone.” Mr. Dillon was described by Mr. Mann as having an “insatiable desire to own the libs.”

In that vein, the site has taken aim at the Academy Awards and its new representation metrics. The #MeToo movement. The Black Lives Matter protests and Colin Kaepernick. Even the West Coast wildfires.

Nicole Hemmer, a research scholar at Columbia University, sees the appeal of the Bee’s comedic sensibility as in line with the appeal of the president’s own politics. “It maps really clearly with Trump’s conservatism,” she said. “Which is anti-liberalism more so than it is any kind of principled conservatism.”

Their most popular articles are often those making jokes at the expense of Democratic presidential candidate Joe Biden. One piece after the first presidential debate proclaimed, “Biden Exceeds All Expectations By Staying Awake For Entire Debate.” These are the stories that tend to draw attention from high-profile Twitter users, like President Trump and Senator Ted Cruz, Republican of Texas. 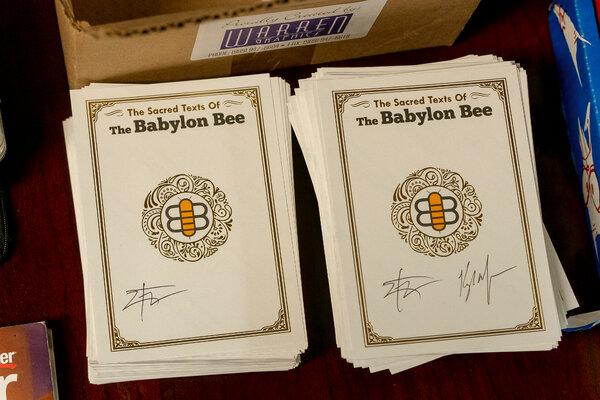 The site, which was so critical of Mr. Trump four years ago, also shares common ground with the president: a predisposition to calling reporting it doesn’t like “fake news.” The site’s “About Us” page promises to “focus on just the facts, leaving spin and bias to other news sites.” The Bee’s merchandise reiterates this commitment. Their T-shirts read “Factually Inaccurate, Morally Correct.” Their face masks are branded “Fake News You Can Trust.”The Babylon Bee, which said it draws more than 8 million visitors a month, is somewhat of an anomaly. In the world of partisan media, the left has tended to dominate humor — Jon Stewart, Stephen Colbert, Bill Maher — while the right has favored radio shows fueled by outrage, giving rise to stars like Rush Limbaugh, Michael Savage and Sean Hannity.

Sarah Isgur, a Republican political adviser, said there used to be a sense that humor on the right just wasn’t possible. “It wasn’t that there wasn’t a conservative ‘Daily Show’ or a conservative Onion,” she remarked in a podcast interview with the Bee’s editor. “It was that you couldn’t have one, because there wasn’t anything funny about liberals or the conservative side.”

Some media researchers speculate that conservative comedy often foundered because it took aim at the powerless. “Satire typically punches up,” said Anthony Nadler, an associate professor at Ursinus College, author of “News on the Right.” “It’s mocking the pretensions of the powerful.”

That can present a challenge for supporters of the political party currently in power. The Babylon Bee has dodged that problem by ridiculing every source of authority outside the White House: media, films, television. “Academy Strips ‘Schindler’s List’ of Best Picture Award Due To Lack of Diversity,” read one recent headline. And another one: “Man Who Agrees With The Media, Universities, Corporations, And Hollywood Thinks He’s Part Of The Resistance.”

“Conservatives see liberal culture as the source of power,” Mr. Nadler added. “They see liberals as setting norms in popular culture, television, and film, and they present themselves as rebels against that.”

For many, that frustration with liberal culture is a more powerful unifying force than any problems with Mr. Trump. “There are a lot of conservative people who are put off by the outrage that Trump spews, but also by the reaction against Trump,” Mr. Nadler continued. “There’s an audience to assemble there.”

The idea for the Babylon Bee was born of a frustration with the anemic realm of conservative comedy. Mr. Dillon, an entrepreneur who bought the site in 2018, was a fan of The Onion, and was gratified to see a similar wry tone applied by the religious right. He felt that conservatives often took themselves too seriously, and with satire they could take a closer look at their own “hypocrisies and double standards.” The site positioned itself as a cultural outsider from the start — Babylon refers to the idea of exile, feeling “politically homeless.” The site was launched without outside funding by its founder Adam Ford and now runs primarily on advertising, though it also sells branded merchandise.

To the Babylon Bee’s leadership, there has never been a more important moment for satire. Political humor, the editors said, can often reveal the truths that get lost amid the “spin” and “bias” of so-called “real news sites.” One of Mr. Mann’s guiding principles, which he shares often with staff, is a quote from the critic G.K. Chesterton: “Humor can get in under the door while seriousness is still fumbling at the handle.”

“We wanted to communicate to a culture that it feels like no longer believes in truth,” Mr. Mann said.

Their devotion to truth, Mr. Mann explained, means the Bee will continue to swipe at both political parties. “We are one hundred percent committed to making fun of Trump,” he said, but he does not buy into the idea that Mr. Trump is “exceptionally bad.”

“If we make a joke about Trump being bad, it’s already been done a million times by the late night shows,” he said. “When people find the Babylon Bee they go, ‘Hey this comedy makes fun of everybody, but it’s a little harder on the left, and when it makes fun of the right it’s not hateful.’ People can tell it’s loving humor.”

Some media researchers believe that this willingness to mock both parties — rarer in a climate where many mainstream comedic voices see the president as a disastrous leader, not a situation where jibes should be evenly distributed — might be an important element to comedic success.

“Jon Stewart didn’t sit there saying ‘how do I create a liberal news show,” said Brian Rosenwald, a media historian. “He was a showman.” The key to good political humor, Mr. Rosenwald said, is to put the humor before the politics.

Mr. Mann, who identifies as an observant Christian, sees his satire as part of a biblical tradition. He pointed out that the prophets often used mockery to make their points. Whenever the Babylon Bee publishes a headline that later comes true in some form, the staff calls it a “Bee prophecy fulfilled.” A recent example: “CNN criticizes Israel, Arab Leaders for Shaking Hands in the Middle of a Pandemic.” When a television commentator actually did note the lack of social distancing at the ceremony for the Abraham Accords, one Babylon Bee reader tweeted that “CNN’s actual coverage is indistinguishable from Bee satire.”

The Bee found itself walking the thin line between satire and fact in 2018, when it joked that CNN purchased an “industrial-sized washing machine for spinning the news.” However obvious it should have been that the comment resided on the satirical side of the ledger, it still led to an awkward vetting by the fact-checking website Snopes and Facebook.

The Bee is now offering subscription plans to build financial stability, partly to compensate if Facebook or Twitter shuts down its accounts.

When Mr. Trump first took office, the Bee’s staff worried that it would be harder to make conservative comedy under a Republican administration. But they soon found that Mr. Trump’s outsized personality, combined with the rage he inspired on the left, presented plenty of material. Mr. Mann said he might like to see Mr. Trump re-elected, if only for his comedic value.

“Everyone on the left treats the Trump administration as a drama,” he said, citing a senior writer for the Bee. “We try to treat it as comedy.”

President Trump plans his return to the campaign trail and Joe Biden travels through Pennsylvania over the weekend, pushing an economic message. Read live updates.

Many rules have changed during the pandemic, making it harder to figure out how to cast your ballot. This interactive guide can help you ensure your vote is counted.

Keep Up With Our Coverage

Get an email recapping the day’s news