The president visits a vaccine plant as he faces thorny questions on fulfilling his promises. 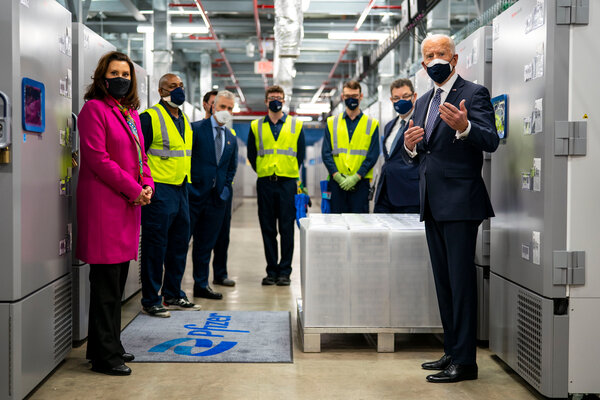 It has now been exactly 11 months to the day since California became the first state in the country to issue a mandatory stay-at-home order — and finally, experts say, it’s starting to feel as if the country is turning a corner in the pandemic.

This week, with vaccine production continuing to ramp up, President Biden declared that vaccines would be available for 300 million Americans “by the end of July” — enough to reach a critical mass. And today, as Biden headed to Michigan to tour a Pfizer vaccine plant, the Centers for Disease Control and Prevention released a report stating that the available vaccines were quite safe, with only minor side effects.

Biden struck a hopeful tone during his remarks at the plant, underlining the difficulties of rolling out a nationwide vaccination program but also ticking off a laundry list of goals that had been set and met over the past few weeks.

“I can’t give you a date when this crisis will end, but I can tell you we’re doing everything possible to have that day come sooner rather than later,” he said. “I believe we’ll be approaching normalcy by the end of this year and, God willing, this Christmas will be different than last. But I can’t make that commitment to you; there are other strains of the virus; we don’t know what could happen in terms of production rates. Things could change.”

For now, experts agree there is cause for optimism. “All of the indicators are pointing mostly in the right direction,” said Josh Michaud, associate director for global health policy at the Kaiser Family Foundation. “The case trajectories are looking good right now. All the case numbers are coming down.”

Now that former President Donald Trump’s impeachment trial has been put to bed, the spotlight has settled on the new administration — and there’s no greater political issue on Americans’ minds than how the government responds to the pandemic.