Home » Politics » With Deal in Hand, Democrats Enter the Fall Armed With Something New: Hope

With Deal in Hand, Democrats Enter the Fall Armed With Something New: Hope

Democrats say the climate and tax bill will help win over a skeptical electorate in November, as Republicans try to galvanize their base against a progressive wish list. 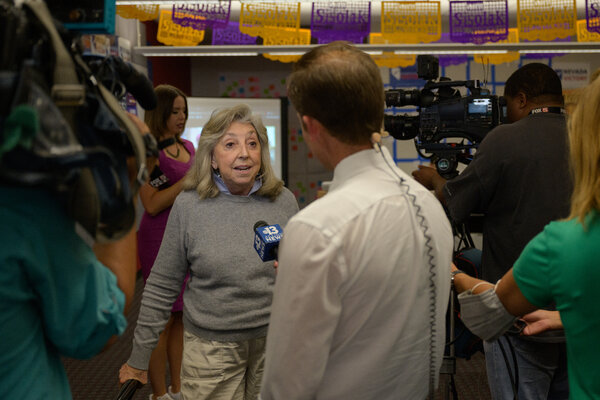 By Shane Goldmacher and Katie Glueck

Vulnerable incumbent Democratic senators like Maggie Hassan of New Hampshire and Catherine Cortez Masto of Nevada are already planning events promoting the landmark legislation they passed over the weekend. Democratic ad makers are busily preparing a barrage of commercials about it across key battlegrounds. And the White House is set to deploy Cabinet members on a nationwide sales pitch.

The sweeping legislation, covering climate change and prescription drug prices, which came together in the Senate after more than a year of painfully public fits and starts, has kicked off a frenetic 91-day sprint to sell the package by November — and win over an electorate that has grown skeptical of Democratic rule.

For months, Democrats have discussed their midterm anxieties in near-apocalyptic terms, as voters threatened to take out their anger over high gas prices and soaring inflation on the party in power. But the deal on the broad new legislation, along with signs of a brewing voter revolt over abortion rights, has some Democrats experiencing a flicker of an unfamiliar feeling: hope.

In interviews, Democratic strategists, advisers to President Biden, lawmakers running in competitive seats and political ad makers all expressed optimism that the legislation — the Inflation Reduction Act — would deliver the party a necessary and powerful tool to show they were focused on lowering costs at a time of economic hardship for many. They argued its key provisions could be quickly understood by crucial constituencies.

“It is easy to talk about because it has a real impact on people every day,” Jennifer O’Malley Dillon, the White House deputy chief of staff, said in an interview. The measure must still pass the House and could come up for a vote there later this week. “It’s congressional Democrats who’ve gotten it done — with no help from congressional Republicans.”

For younger voters, who polls have shown to be cool to Mr. Biden and his party, the package contains the most sweeping efforts to address climate change in American history. For older voters, the deal includes popular measures sought for decades by Democrats to rein in the price of prescription drugs for seniors on Medicare. And for both the Democratic base and independents, the deal cuts against the Republican argument that a Democratic-controlled Washington is a morass of incompetence and gridlock unfocused on issues that affect average Americans.

“It’s very significant because it shows that the Democrats care about solving problems, it shows that we can get things done and I think it starts to turn around some of the talk about Biden,” said Representative Dina Titus, a Nevada Democrat running in a competitive re-election race, alluding to angst about the president as his national approval rating has hovered around 40 percent.

Adding to the Democratic Party’s brightening outlook were the results of the Kansas referendum on abortion rights last week, when a measure that would have removed abortion protections from the Kansas Constitution was overwhelmingly defeated. It was a stark reminder of the volatile and unpredictable political impact of the Supreme Court’s overturning of Roe v. Wade.

“I can kind of feel it on the streets, that there’s some change in momentum,” Ms. Titus said.

Indeed, in recent days, Democrats pulled ahead of Republicans for the first time this year when voters were asked which party they would prefer to control Congress — the so-called generic ballot test — according to polling averages maintained by the data-journalism website FiveThirtyEight.

There is no guarantee of success in selling the bill. Last year, the White House shepherded through a rare bipartisan infrastructure deal. But its passage, which drew great fanfare in Washington, did little to arrest the continual decline in Mr. Biden’s approval ratings — and many Americans were still unaware that the measure passed months later, polling showed.

More Coverage of the 2022 Midterm Elections

Republicans say the new legislation could galvanize their own base against an expansive progressive wish list that has been decades in the making, just as the passage of the Affordable Care Act preceded the Republican wave of 2010.

“That’s the sort of thing that could really set a spark to the powder keg — in the same way that the midnight passage of Obamacare was the moment that electrified Republican voters and started to really pull independents in our direction,” said Steven Law, who leads the main Republican super PAC devoted to Senate races.

Republican assaults on the legislation — for bulking up the Internal Revenue Service, for creating a green energy “slush fund,” as Senator Tom Cotton, Republican of Arkansas, has called it, and for expanding spending programs despite the bill’s Inflation Reduction Act title — have already begun.

Senator Ron Johnson of Wisconsin, who is seen as the chamber’s most vulnerable Republican in November, dismissed the package, which he voted against, as “giving bad policies a nice name.” But Mr. Johnson’s likely Democratic opponent, Lt. Gov. Mandela Barnes of Wisconsin, immediately signaled that he intended to make votes around the legislation an issue in the general election, focusing in particular on insulin costs.

Advisers to both Mr. Biden and Senator Chuck Schumer of New York, the majority leader, said a significant difference between this package and the infrastructure one is that the party-line votes on this deal were ready-made for the kind of contrast messaging that campaigns thrive on. After the president signs the bill, Building Back Together, a nonprofit aligned with Mr. Biden, is planning a major television and digital ad buy in multiple battleground states.

The provision that Democrats in competitive races appear most energized about is the long-sought ability for the government to negotiate lower drug prices for Medicare recipients with the pharmaceutical industry. And Democrats said the legislation would help address the spiraling cost of living — a defining issue of 2022.

“We are dealing with significant economic issues that people are facing, and that’s demonstrated by the legislation we’ve passed,” said Senator Gary Peters of Michigan, who is the chairman of the Democratic Senate campaign arm. He called the measure central to Democratic messaging in the final campaign stretch, and crucial to crystallizing the choice between the parties.

The legislation is paid for, in part, through a new 15 percent minimum corporate tax for companies that report more than $1 billion in annual income to shareholders and more funds for the I.R.S. to crack down on wealthy tax evaders. Overall, budget analysts projected it would shrink the deficit even while steering nearly $400 billion in tax credits toward consumers for buying electric vehicles and for electric utilities to adopt renewable energy sources.

Some experts predict reduced energy bills, which top Democrats said they planned to pitch as another cost-cutting element.

For Democrats, the best salespeople may not be the political leaders at all. Advocacy groups for seniors, for instance, might be able to more persuasively trumpet the government’s ability to negotiate reduced drug prices — and the AARP New Hampshire state director was set to join Ms. Hassan at an event discussing the new efforts to lower prescription drug prices. Likewise, environmentalists who have long expressed frustration with inaction in Washington would have far greater credibility with liberal voters to declare the package a landmark achievement, even if imperfect.

“While there is an inside-the-D.C.-bubble appeal to saying you did a big thing, for voters to appreciate it, you have to sell each of the things individually,” said Michael Podhorzer, the former longtime political director of the A.F.L.-C.I.O.

In Georgia, Senator Raphael Warnock, one of the chamber’s most endangered Democrats in 2022, is able to campaign on the fact that the final package includes provisions of legislation he had pushed, such as the overall annual limit of $2,000 for prescription drugs for those on Medicare — an issue he advertised on even when it was just a proposal.

In Arizona, Senator Mark Kelly and two other Western Democratic senators — Ms. Cortez Masto and Senator Michael Bennet of Colorado, all up for re-election in 2022 — announced on Friday the last-minute addition of $4 billion in drought funding.

“When it comes to legislation, I’m very much of the school that if a campaign isn’t or can’t communicate on it — on television, online, etc. — then it’s not real,” said J.B. Poersch, who leads the main Senate Democratic super PAC, which has more than $100 million in television ads reserved in the coming months.

And this package, he said, more than meets that test: lowering drug costs, capping insulin prices for Medicare recipients and protecting the subsidies in the Affordable Care Act that lower premiums — all of which Republicans opposed. “That’s a pretty good argument if you ask me,” he said.

New polling released last week by Data for Progress, a left-of-center think tank, showed why Democrats are so eager to talk about the prescription drug piece, in particular: Allowing Medicare to lower drug prices through negotiations was wildly popular, with 85 percent support.

But the survey had warning signs for Democrats. Only 45 percent of likely voters said they believed the overall package would improve their own “family’s bottom line” at least some or a great deal.

Some frontline Democrats on Monday were reluctant to say the political environment has shifted substantially. With the president’s approval ratings still abysmal, they implored the White House to do its part, with advertising and barnstorming to emphasize the string of recent successes, including a bipartisan bill that sought to shore up America’s competitive edge versus China in manufacturing and technology and ensuring medical care‌ for veterans exposed to toxic burn pits.

Representative Susan Wild, a Pennsylvania Democrat running in a competitive district, praised many aspects of the legislation, especially concerning climate and some health care provisions.

But, she warned, “I always think we should be cautious about over-promising.”

She added, “It is a really important bill, don’t get me wrong. But at the same time, you always have to temper your enthusiasm with a huge dose of reality so that people don’t think that next time they go fill their prescription, it’s going to cost less.”