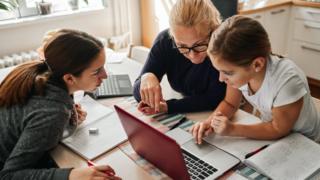 Children from wealthier families are spending more time each day studying in the coronavirus lockdown compared with the poorest, according to new research.

A survey of families in England suggests better-off children will have studied for around seven days more than their poorer peers by next month.

Children in the highest-income families spend six hours a day on education, but the poorest spend four and a half.

The government said it will do whatever it can to ensure no child falls behind.

The study of more than 4,000 families, carried out for the Institute for Fiscal Studies (IFS), found the gap in time spent on education activities was slightly bigger for primary age children than older pupils.

Whatever their income, more than half of parents said they were finding it hard to support their children learning at home.

Nearly two in three (64%) of secondary pupils in state schools from the richest households are offered some form of active help, compared with 47% from the poorest fifth of families, the study suggests.

The new analysis from the IFS found that children from more disadvantaged families have fewer educational resources and parental support for home learning.

The research also found poorer children were less likely to have a place to study.

Less than a third (29%) of parents in the poorest families said they would send their child back to primary school given the choice, compared with 55% of the most affluent parents.

Ministers have said some primary school pupils in England should be able to go back to school next month.

But teachers’ unions have raised concerns over safety amid fears a rush to return to the classroom could spread the coronavirus in schools.

Researchers have called on the government to address the disparities between children from different backgrounds during school closures, as they warn the crisis is likely to widen attainment gaps.

Lucy Kraftman, research economist at IFS and co-author of the report, added: “These differences will likely widen pre-existing gaps in test scores between children from different backgrounds.”

A Department for Education spokeswoman said: “We will do whatever we can to make sure no child, whatever their background, falls behind as a result of coronavirus.

“We have set out plans for a phased return of some year groups from 1 June at the earliest in line with scientific advice.”

The hit cartoon series has helped me process my biracial identity.

Ms. Clark is a culture writer. 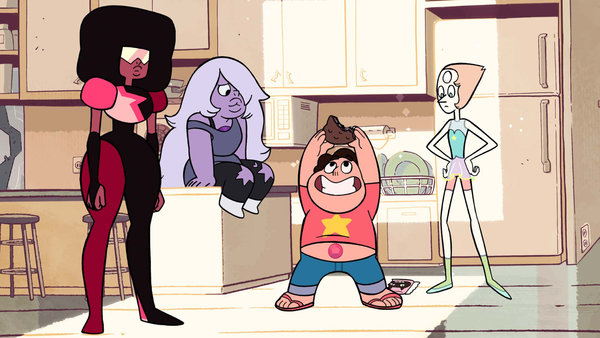 For most of my life, Taiwan was a place that lived in my head. My mother told me her origin stories like a series of tall tales, full of pitched, tin roofs and fields of underbrush that my grandmother used to drive through on her moped, lifting her legs to avoid snake bites.

Her stories felt like aphorisms I could attach to the idea of being Taiwanese, something I knew I was, but felt no particular ability to locate outside the life I lived in California. I could not get past the differences of our childhoods, the disparities in our means, the foreign topography. It would take me years to realize I’d inherited her cultural traditions and perspectives growing up — and even longer to separate my identity from the need to demonstrate proficiency in it, as if it were a set of actions committed to memory.

When I began watching Rebecca Sugar’s musical cartoon series “Steven Universe” and its limited series spinoff “Steven Universe Future” — which aired its final episodes on Friday — it immediately fit like a familiar sweater. So much of Steven’s coming-of-age story mapped onto my own: We both come from two distinct cultures, the most dominant of which can feel inscrutable.

Though Steven’s birth father Greg is an Earth dweller, he is raised by the “Crystal Gems,” Garnet, Amethyst and Pearl, female-presenting, nonbinary aliens who manifest special powers through gemstones embedded in their bodies. They are Steven’s only tether to his deceased mother’s birthplace of Gem Homeworld and, as early as the pilot, they begin the difficult work of helping him navigate his powers and his identity.

I was raised primarily by my Taiwanese-born mother and her parents. My white, American-born father was present and loving, but my grandparents’ proximity to my childhood home made theirs the nexus of domestic life. It was in that house I learned how to be. I learned to reuse every Ziploc bag and twist tie, to never buy napkins or ketchup — both of which I could get for free at the Chino Hills Chick-fil-A. I learned to take my shoes off at the door or face verbal recrimination, and to periodically run the engine on the van I would never inherit, lest it die through disuse and the passage of time. (Long after my grandparents had passed, the van’s engine was still running.)

These stories fit into a well-trod Asian-American immigrant narrative — one that easily falls victim to broad generalizations and monolithic classification, despite the rich diversity among Asian-American ethnic groups. What remains personally true is the immense pressure I felt to succeed, because my achievements felt like proof of concept: Proof that leaving Taiwan was worth it, proof that we could attain and even improve upon the American dream.

I learned to create my own community in the language of code switching between my Taiwanese family in California and my dad’s family in Kentucky. My personality became circumstantial, less a person than an echo of the space I lived in.

This is also Steven Universe’s lot in life, and much of the show is dedicated to his earnest blunderings. Though he looks like a human boy, he carries his mother’s gemstone in his bellybutton. He shuttles between Crystal Gem missions and spending time with his human father and friends in the fictional Beach City. He accidentally summons his powers in the presence of his human friends, though he struggles to invoke them during missions.

The episodic arcs are painfully familiar, evoking memories of quiet heartbreak, isolation and anxiety. (Luckily, the show has an extremely catchy song, “Here Comes a Thought,” about managing anxiety.) When Steven unearths the traumas of the Crystal Gems’ migration to Earth, he begins to feel immense pressure to live up to the sacrifices of those who raised him.

This is often conveyed through Pearl, the Crystal Gem who reminds me most of my own mother. In a particularly moving episode, Pearl teaches Steven’s human friend Connie how to sword fight so she can defend Steven during their adventures. This is not unlike my mother’s own history of subordinating her needs to mine; I also feel a responsibility to fight battles my mother never asked me to.

Much of it is in the small things. I watched for years as my mother strategically deployed my father to return goods or pick up the rental car, so she could avoid being racially profiled. Now, when my mother walks into salons where white women are offered beverages while she is handled with overpronounced English, I make a point to ask them if they have tea or coffee for her. When she told me Costco denied her a return on a rotten watermelon because she did not bring it back as evidence, I seriously contemplated fishing it out of the trash.

I pick the most pedantic examples because these are the kinds of accommodations any white American would assume they’d receive. I pick these examples because I can control them — the wounds of her past are inaccessible to me.

Just as my perpetual sense of foreignness irritates me, my own rush to act as her personal white savior also irritates me. Providing for our parents is a bedrock of my culture. At the same time, without financial stability or access to capital, I don’t know what better I can do than use my white-passing face to fight for a better seat on an airplane, the ability to return defective products and tea at the hair salon.

I stare at the mirror wondering about the liminal spaces where my Asian-American identity begins and my whiteness begins, prodding at tender spots where my emotional scars might be separable from those I have inherited.

In the finale of “Steven Universe,” Steven’s gem is grotesquely removed from his body. He splits into two parts. But both of them are Steven, identical in appearance, different only in color grading.

What would I be, I wonder, if I were split into two component parts? I am not Steven Universe, I am a speck in the universe that will outlive me. But seeing him cleaved in two to prove the consistency of his identity to his nemeses made me contemplate the ways I perform my identity on the behalf of others. Watching him repeatedly attempt to save the universe made me reflect on the absurd expectations I place on myself. And that is a kind of progress.

As a coda to the original series, “Steven Universe Future” delivers an even more poignant and direct message as the hero begins to understand the roots of his post-traumatic stress. Without the pressures of saving the world or living for others, Steven finally has time to process his earlier teenage years. Watching him learn to live for himself is an even greater balm.

Nicole Clark (@nicalexiac) is a culture writer and contributing editor at Catapult.