The number of potential terrorists has likely grown in the 20 years since the September 11 attacks and the terror threat is more global, the defence secretary has told Sky News.

Ben Wallace also signalled that a new fleet of armed drones could be used against targets in Afghanistan if its Taliban rulers fail to make good on a pledge to prevent the country from again becoming a haven for groups like al Qaeda and Islamic State.

The 9/11 carnage – exactly two decades ago on Saturday – was directed by al Qaeda from Afghanistan when the Taliban was last in power.

It triggered the US-led invasion, which was designed to combat the terrorist threat. 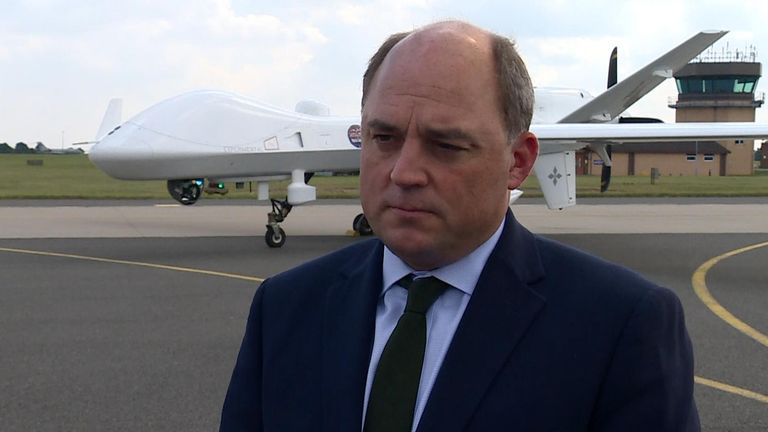 The senior government minister was speaking as he showcased the Royal Air Force’s Protector drone – which this month became Britain’s first military unmanned aircraft to fly in civilian UK and international airspace alongside civilian planes.

It means once the Protector fleet becomes operational in 2024, bombing missions can for the first time be flown directly from RAF Waddington rather than always having to base the drones closer to the target.

Asked if the terror threat was increasing following last month’s withdrawal of UK and US troops from Afghanistan, Mr Wallace said: “I think the global terrorist threat has taken an uptick.”

Islamist extremist groups would take inspiration from the Taliban takeover in Afghanistan, the defence secretary said.

He also pointed to a growing terrorist threat in Africa and how technology enables extremists around the world to share their knowledge of violence.

“Of course that threat is growing. It is part the proliferation of technology and proliferation of knowledge transfer through the internet, which not only inspires people to do horrific things but tells them how to do it,” Mr Wallace said. 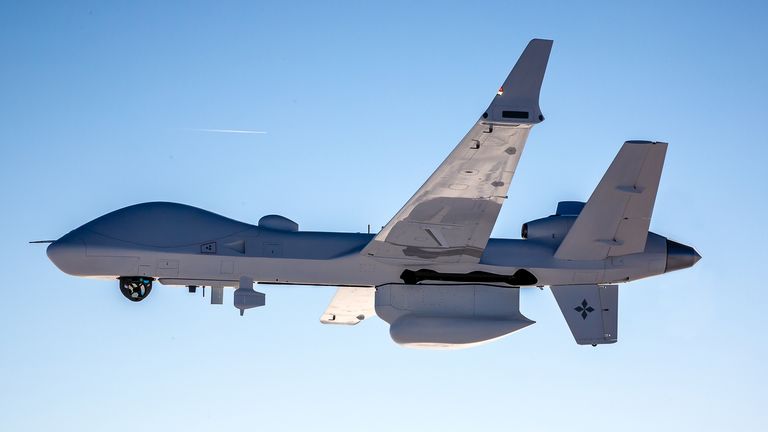 As for whether the terrorist threat is greater now than in 2001, the defence secretary said: “I think it is more global. I think the threat is not as focused at the moment.”

Twenty years ago, al Qaeda carried out a number of high-profile, so-called spectacular attacks against US targets in Yemen, Kenya and most notoriously on US soil itself.

“We don’t see any of those on the horizon,” Mr Wallace said.

“But we certainly see a whole group of people who have the knowledge of doing terrorist attacks and we see people trying to communicate with each other to do that.

“I don’t think it [the threat] is greater in one sense, but I think the reservoir of people who might cross that line into violence is probably greater than it was.”

Air Chief Marshal Sir Mike Wigston, the head of the RAF, said the terrorist threat on UK streets remained real, two decades on from the September 11th attacks on the US.

“It is not a matter of whether we are safer or not it is just recognising violent extremists are out there,” he told Sky News.

“They would do us harm, they are quite willing to commit atrocities on the streets of the UK and we have got to be ready to tackle them along with our allies.” 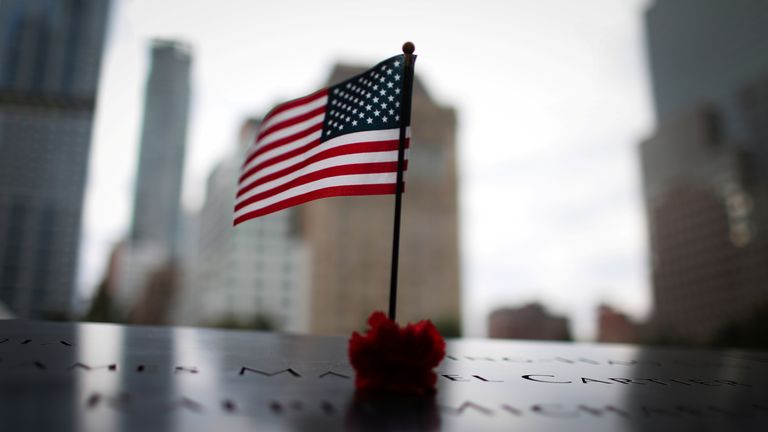 The military’s £260m fleet of Protector drones will become another tool for the UK to use in the fight against terrorism, including – if required – in Afghanistan.

“This gives us a capability to have a global reach against imminent threats to British citizens or her allies and we will use it wherever we need to use it and wherever international law allows us,” the defence secretary said.

It is a role currently carried out by a nine-strong fleet of Reaper drones.

The Protector can fly up to 1,200 miles and operate over a target area for 17 hours, including dropping bombs, firing missiles or gathering information from cameras and other sensors and radars on board.

That is more than double the range of the Reaper drone. 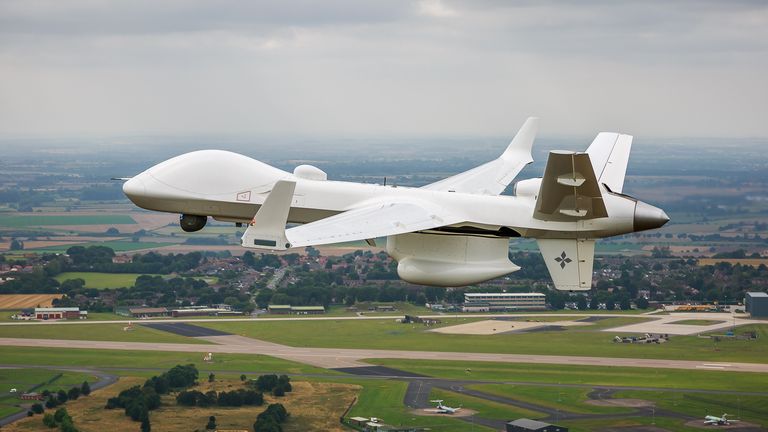 Unlike its predecessor, the Protector can also fly in civilian airspace instead of only in segregated areas.

It means that the drone could be used against terrorist targets in the UK, though the defence secretary and air chief said this would be highly unlikely as the police and armed forces already have plenty of other capabilities to deal with the domestic threat.

But the aircraft might be used in UK airspace to help with maritime surveillance, including tracking migrants, as well as responding to environmental disasters such as oil slicks.