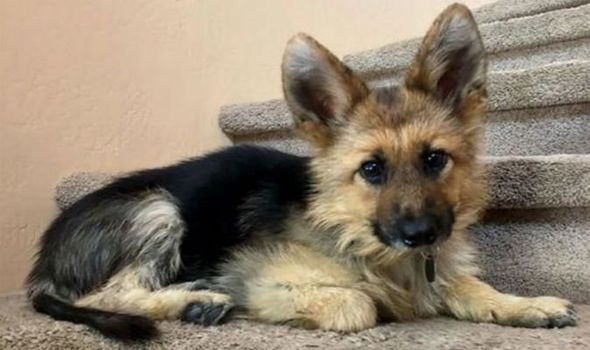 Four-year-old Ranger has pituitary dwarfism, which means he will grow to only a third of the size of his littermates and it will also affect his life expectancy.

Ranger’s owner, Shelby Mayo, from Arizona in the USA, expressed worries that she had requests to breed the “forever puppy,” even though the condition leads to health issues and a shorter life expectancy for the dog.

Shelby said: “Ranger is very cute and he’s a great dog, but ultimately this is the result of inbreeding and we want to stop that.

“Breeders need to be aware that this can occur and they need to try and prevent it.

“Ranger has had a good life so far but that’s not the case for all.”

Dwarfism is more common in German shepherds, corgis and basset hounds and can shorten a dog’s life expectancy to just three years.

PDSA vet Lynne Janes explained: “Dwarfism is an inherited genetic condition whereby both parents have to be carriers of the gene for a puppy to be affected.

“The lack of growth hormone results in slow growth from about two months of age.

“Affected puppies are very obviously smaller than their littermates, and also fail to grow an adult coat – their fur remains soft and woolly.

“In many cases while the coat may recover, the dwarfism is irreversible and these puppies do not grow to their expected adult size.

“Inbreeding can be a factor and dogs who are known to have produced a puppy with dwarfism should not be bred from again.”

It was clear that Ranger was the smallest of his litter when Shelby first saw the pup.

She recalled: “He was definitely the runt of the litter as he was half the size of his littermates.

“We didn’t know at the time what condition he had but we assumed he would grow bigger.”

But sadly Ranger quickly developed an infection in his neck which ended up being Giardia, a parasite which attacks the lining of a dog’s intestine.

“We thought that’s why his growth was stunted,” Shelby added.

This was until a vet revealed that the puppy had pituitary dwarfism.

Because of low thyroid levels, Ranger lost all of his fur when he was an infant, but was thankfully able to grow it back with the help of medication.

The German shepherd initially struggled with eating but has since developed a good appetite.

Ranger’s Instagram page was launched by sisters Shelby and Darcy in 2017 when they first adopted the puppy, gaining over 131,000 followers including American actress and dog lover Lili Reinhart.

At first the account was created to track Ranger’s progress, but Shelby also uses the platform to raise awareness for inbreeding.

Shelby said: “The Instagram page has really been a reflection of his journey, but we had no idea what it would turn into.”

She wants to warn breeders about the life-altering risks and discourage anyone from attempting to breed dwarf dogs.

Despite initial challenges with Ranger’s health, he is a happy and well looked after dog.

While he may be small in stature, Ranger is far from intimidated by his fully-grown German shepherd sister, Jesse.

“Jessie is three times the size of him but Ranger is very much the dominant one and the alpha dog,” Shelby laughed.

“He is very dominant so he does not get picked on, so his size does not stop him at all.”

Keep up to date with all our TeamDogs news by following our social pages. As well as videos, tips and advice, we’ll also be sharing some of your amazing doggy pictures so follow us on Facebook, Instagram and Twitter.