A “very lethal attack” could happen at Kabul airport in a matter of hours, Armed Forces Minister James Heappey has said.

Mr Heappey told Sky News the “grim reality” is that intelligence has got “ever more certain” that an attack could take place at the Afghanistan capital’s or the handling centres being used to assess refugees.

Asked if an attack could happen in the next few hours, he replied: “Yes.” 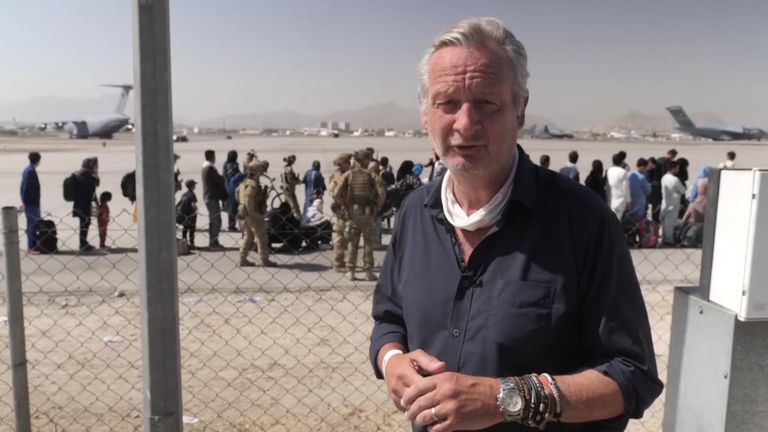 The defence minister made it very clear that the “window of opportunity to evacuate people is closing”, but would not say when the last flight will depart.

He added that the UK government is “doing our best to keep those that have not left safe”.

“We are doing our best to look at what other alternative provisions we might be able to make, but obviously we won’t be advertising those because that would simply make the alternative routes a target in themselves.”

It comes as a senior British source said there was a “very high risk of a terrorist attack” against the Kabul evacuation operation which the UK, US and other allied forces are taking part in.

The group that is of most concern is an Islamic State affiliate in Afghanistan called Islamic State Khorasan, or ISIS-K, the source said.

The threat is heaping extra pressure on the operation to help people flee the nation following its takeover by the Taliban.

“Intelligence over the course of the week has got ever more certain around the highly credible, imminent, lethal attack on the airport or the handling centres being used by western forces,” Mr Heappey told Sky News.

“And in all good conscience, whilst of course the clock is still ticking towards the end of the month, we had to share that very, very real threat with people in Kabul and advise them that they should move away from the airport, not come to the airport.

“And I am aware that that causes real desperation for many people who are yet to be brought out of the country, but we are not being overly cautious, the threat – whilst I cannot give you the detail – is very credible and very lethal.”

Asked how many more flights are expected to take off from Kabul, Mr Heappey added: “Well, we still have 11 flights programmed to leave in the next 24 hours.”

He said the intention is to “continue processing people” on Thursday, but that “in reality, we have to share the advice that we have given” for people to avoid congregating at the airport.

Mr Heappey continued: “It means we have to be very clear with people what the risks are and we are doing our best to mitigate them, but we do not have the number of troops on the ground that we would need to be able to go off into the city, find the threat and remove it. “That means therefore that we have to operate with the threat as it is and get as many people out as we can in the time that remains.”

Pressed again on when the last evacuation flight is due to leave Kabul airport, the defence minister replied: “Our judgement is that we shouldn’t advertise the end of the evacuation flights.” He added: “We have to responsible in how we communicate what remains of our plan.

“And once the military withdrawal is fully under way, we need to not offer any commentary on that – because as you would imagine, as each flight leaves, fewer troops remain to secure the ground there after, so we are more at risk as we build up to that moment.

“So, I’m afraid the Ministry of Defence needs to be responsible to our troops and those outside in not sharing all the details and I apologise for that.”

Mr Heappey told other news outlets that 1,988 people have left Kabul over eight RAF flights in the past 24 hours.

On Wednesday night, the Foreign, Commonwealth and Development Office (FCDO) warned of an “ongoing and high threat of terrorist attack” at Hamid Karzai International Airport.

And it is reported that Defence Secretary Ben Wallace told MPs on a briefing call that eligible Afghans hoping to seek asylum in the UK would be better off now heading for Afghanistan’s border and trying to make their way to a third country.

The government has previously said it will increase diplomatic support in neighbouring countries to help process refugees who flee from Afghanistan.

Crowds of people have gathered at the airport in Kabul in the hope of boarding what are believed to be the final few evacuation flights.

The warning from UK defence ministers for people to steer clear of the airport marks a significant change in tone from when Prime Minister Boris Johnson said last week that the situation was “stabilising”.

The end of the evacuation operation is rapidly approaching after US President Joe Biden rejected calls from Mr Johnson and other allies to delay his 31 August withdrawal date for the remaining US troops, who are providing security at Kabul airport.

It is believed many Afghan interpreters and British citizens still need to be evacuated from the country.