MORAVIAN FALLS, N.C . — On the drive up Brushy Mountain through high pine woods, the GPS guidance peters out quickly.

“Take a left at the ‘Road Closed Ahead’ sign” is the first of many twists and turns that John Holman texts to visitors to his distillery, here at the eastern edge of the Blue Ridge Mountains.

The bridge to the property was washed away by Tropical Storm Eta last November, and the pandemic has discouraged the customers who normally visit to buy his high-proof “waters of life,” also known as aquavit, vodka and schnapps.

But Mr. Holman still shimmers with energy and pride in his pet project: applejack.

Holman Distillery is one of several new producers, here and in other apple-rich regions, that are reviving this quintessentially American drink — the original moonshine of the colonies — from the death blow it was dealt a century ago by Prohibition. 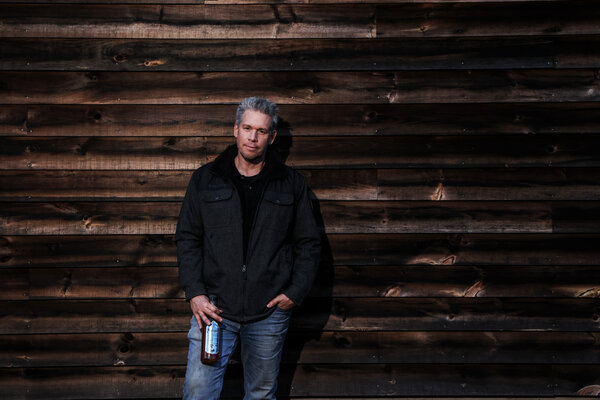 Mr. Holman, 49, is unusual in making applejack in the traditional way, but like other craft distillers, he is nudging it to line up with modern tastes, barrel-aging it to give it the smooth, sippable patina of fine brandy, and tinkering with single-varietal batches to bring out the flavor of heirloom fruit.

Just as long-aged American spirits like Pappy Van Winkle bourbon and Michter’s rye have become as desirable as French Cognacs and single-malt Scotch whiskies, the new apple brandies have heritage and flavor enough to build a devoted following.

Applejack was traditionally produced from the hard cider that was the everyday drink for most Americans in the 18th century. Naturally fermented and low in alcohol, hard cider was safer than well water, cheaper than beer and easy to make at home.

In this cool, fertile Appalachian region, as in most of the Northeast, apples were then far more plentiful than the grains needed to make whiskey. Up to and through the Prohibition era, there were countless producers making and (illegally) selling applejack in the Blue Ridge Mountains, where roads were limited and trees provided thick cover from government agents.

Local Wilkes County bootleggers like Junior Johnson, the Thomas brothers and the Flock family famously became the first generation of NASCAR drivers in the 1940s and ’50s, and many of the sport’s first speedways, along with its Hall of Fame, are within 100 miles of here.

The original applejack, which many historians believe was invented by American colonists, was produced by a low-tech method called “jacking.” Jacked spirits are distilled not by the usual method of boiling, but by freezing, and any household with a supply of hard cider and cold weather could make applejack.

With each freeze, the water in the cider crystallizes into slushy ice. Each time the ice is skimmed off, the concentration of alcohol grows, until what is left in the barrel reaches about 40 proof. That clear spirit is applejack — not as strong as modern distilled spirits like vodka, but strong enough to last the winter.

Mr. Holman’s jacking method is a guarded secret, but he is far from the only craft distiller experimenting with applejack (and its aged version, apple brandy) in this region, where apples have long been a staple crop.

Virginia and the Carolinas are as far south as most apple varieties can grow; they need a certain number of cold nights each year to flourish. It’s the land of dried apple hand pies, apple stack cakes, apple cider vinegar and applejack — all ways to preserve fall’s fruit for eating and drinking through the winter.

The original applejack was probably cloudy, with bits of peel, bees, leaves and whatever else stumbled in over the course of the winter. The new versions of applejack — from producers like Catoctin Creek, Holman Distillery and Copper & Kings — range from clear, high-proof eau de vie de pomme, to deep auburn liquors often called aged applejack, or apple brandy. (As far as federal labeling goes, applejack and apple brandy are one and the same.)

The local craft-cocktail crowd has already embraced the new apple brandies in classics like the Jack Rose, the Widow’s Kiss and the old-fashioned. Creative bartenders like Drew Furlough, of District 42 restaurant in nearby Asheville, are building new drinks around them, like the Wright Flyer, a variation on the Paper Plane. “The local food ideas around here have worked their way into my blood,” he said.

The baker Brian Noyes of Red Truck bakery in Marshall, Va., agrees. A former art director at The Washington Post, he moved to the edge of the Shenandoah Valley in 2008, when his weekend baking gig got bigger than his day job. Local apple, pear and peach brandies, which perfume and lighten cake batters and pie fillings, have become key ingredients for him. “There was no such thing when I started baking,” he said.

The Blue Ridge Mountains aren’t the only region with a crush of new applejack makers in the last decade. The Northeast has followed suit with Neversink Spirits, in Port Chester, N.Y.; Black Dirt Distillery, in Warwick, N.Y.; and Mad River Distillers, in Waitsfield, Vt. (There are also venerable West Coast producers, like Osocalis, in Soquel, Calif., and Clear Creek Distillery, in Hood River, Ore.)

At the same time, hard-cider production and consumption have boomed through a series of changes to federal regulations. Sales of hard cider multiplied tenfold from 2010 to 2020, according to data from Nielsen, though the market remains small, at less than 1 percent of all alcoholic beverage sales.

As microcideries open on farms, in cities and within microbreweries, hard cider and applejack are developing a stronger infrastructure, producers say. But distilleries that make high-proof spirits remain heavily regulated at both the federal and state level.

Scott and Becky Harris opened Catoctin Creek in Purcellville, Va., in 2009, as part of what Mr. Harris described as a “midlife crisis” in which they left jobs and cities behind to enter a field that neither knew the first thing about. Ms. Harris, 53, is a chemical engineer who had most recently worked on developing microscopically thin polymers for contact lenses.

Like most modern makers of applejack, she uses a complex steam distilling process, describing it in terms opposite to the jacking method. Instead of removing the water from the cider, she says, the art is in removing the alcohol — with its fruitiness intact. “The fats and esters and other flavor chemicals should ride along with the alcohol,” she said. “You have to taste and smell it at every step along the way.”

As most small-scale applejack makers do, Catoctin Creek starts the process not with fresh apples but with hard cider, which it procures from Blue Bee Cider company, in Richmond, Va., in the kind of collaboration often found among craft producers. The Harrises send some of the finished brandy back to Blue Bee, where it is mixed with the cidery’s own fortified apple wine and ginger eau de vie into a spicy dessert cider called Firecracker.

This year’s batch is made from Winesap, Pippin, Arkansas Black and other heritage apple breeds that are good for brandy, she said, because they have almost no sweetness, but share a strong, concentrated apple taste that carries all the way through distillation. The kind of big, sweet apples that have been bred for eating, like Red and Golden Delicious, are far too sugary and watery. “You want a lot of flavor for the flesh that’s there,” she said.

After distillation, Mr. Harris, 50. takes over the barrel-aging process that gives Quarter Branch its amber color and deep flavor, a method based on traditional Calvados, the apple brandy unique to the Normandy region of northwest France. He prefers white oak from Minnesota; other producers are using charred bourbon barrels from Tennessee, discarded sherry casks from Spain and even peaty Scottish whisky casks, rotating the spirit among them to produce the notes of aged leather and young green apple, caramel and vanilla that make apple brandy naturally fragrant, sweet and delicious.

(Apple liqueurs and schnapps, like the ones used for appletinis, are a different category — sugar is usually added to them, often along with artificial colors and flavors.)

Laird & Company, the oldest continuously operated distillery in the United States, began producing applejack in New Jersey in 1698, and handed off the family recipe to George Washington in the 1760s, when the first distillery at Mount Vernon was built. (During Prohibition, the family’s longtime relationship with the White House paid off; the company was granted a special federal license to produce applejack “for medicinal purposes.”)

In the 18th century, when the Blue Ridge Mountains were part of a remote western frontier, applejack was so prized that it was used as local currency.

When the grower John Chapman came through scattering the apple seeds that won him his nickname, it was not in the interest of providing colonists with more pies. It was because cider was both a lifesaving staple and a valuable form of legal tender — and because he was speculating in real estate, buying land that would later fetch a higher price with fruit-bearing orchards.

Applejack has come a long way from the illicit home brew that — like most moonshine — frequently contained hazardous compounds, like methanol and acetone, that can cause blindness, renal failure and other permanent damage.

Those health risks made apple orchards a target of the temperance movement, starting in the 19th century. In 1884, as the movement gathered strength, The New York Times published an editorial titled “A Wicked Beverage,” condemning not only liquor in general, but applejack in particular. “The name has a homely, innocent appearance,” it said, “but in reality applejack is a particularly powerful and evil spirit.” By the time Prohibition ended in 1933, millions of acres of orchards had been razed and were never replanted, because cheap and plentiful grain made whiskey easier to produce.

Chris Montana, the president of the American Craft Spirits Association, said the pandemic poses a similar threat to nascent craft-spirits distillers and the farmers who work with them.

Mr. Montana is the founder of Du Nord Spirits, in Minneapolis, the first Black-owned urban distillery in the United States; his Apple Du Nord liqueur is a cult favorite, with notes of Red Hots candy and clove. His distillery caught fire in May, in the unrest over the killing of George Floyd, and is currently mostly functioning as a food bank.

“At the moment, this is the best way I can serve the community,” he said. Du Nord and many other small distillers have responded to the pandemic by alternating production between spirits and hand sanitizer.

Long before he got into the spirits business, Mr. Holman, of Holman Distillery, graduated from the University of North Carolina at Chapel Hill with a degree in chemistry and a plan to follow his father into the medical profession.

But he became distracted by an interest in wine, and worked in that field for 16 years before building his distillery here, where there are almost as many apple orchards as there are churches. (Some local growers will not sell apples to him, Mr. Holman said, because their religion forbids them to profit from the production of alcohol.)

When he began, Mr. Holman was gripped by the idea of creating unique spirits from a strictly local terroir, like gin flavored with local juniper, and vodka made from native muscadine grapes. But even sophisticated cocktail consumers were nonplused by his pitch, so he switched to a more accessible product: applejack.

“Nobody’s ever asked me what an apple is,” he said.