The ancient Maya date back more than 4,000 years and were famous for their architecture, mathematics and astronomical beliefs. Many of their impressive constructions still stand today in the jungles of southeast Mexico, Guatemala, Belize and western parts of Honduras. El Castillo, also known as the Temple of Kukulcan, is the iconic structure that dominates the centre of the Chichen Itza archaeological site in the Mexican state of Yucatan.

Climbing Kukulcan was stopped in 2006 and public access to the interior was blocked at the same time.

But author and researcher Anyextee managed to gain a rare look inside, sharing his experience on his YouTube channel.

He said: “Even though this is one of the most important pyramids in the land of the Maya, so few know what the interior of this iconic pyramid actually looks like.

“That’s with good reason – it has been closed to the general public for years. 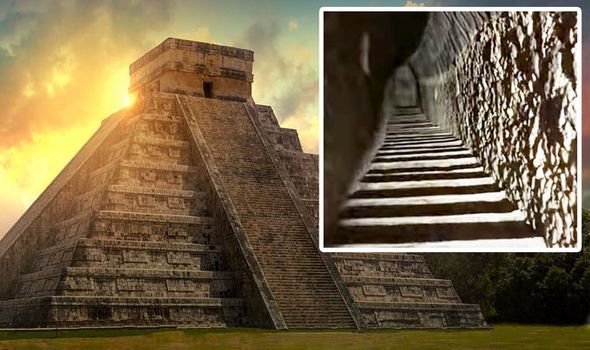 “Video documentation inside is scarce, but today I will bring you inside to investigate with me and experience it for yourselves.

“There are hidden chambers within –  not just one, but two concealed structures within – like a Russian nesting doll.”

Built by the pre-Colombian Maya civilisation sometime between the eighth and 12th centuries, the pyramid served as a temple to the deity Kukulcan.

It has a substructure that likely was constructed several centuries earlier.

And Anyextee explained during his documentary how he got to look inside one such structure. 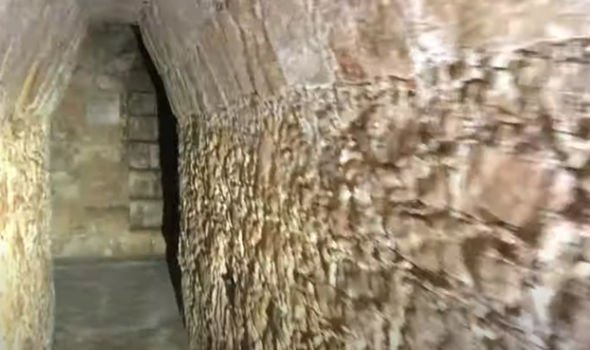 He added: “We will go inside and climb the second pyramid, up to what is called the offerings, or north chamber.

“Human bones were found built into the architecture itself.

“It is one of the most resonant chambers I’ve ever been inside, and I’ve been inside many all over the world.

“You can now count yourself among the few who have seen what’s inside the Temple of Kukulkan.”

The 20-minute-long video showed the explorer roaming around the inside of the monument, capturing footage of the rare statues and “offerings” left years earlier.

The pyramid consists of a series of square terraces with stairways up each of the four sides to the temple on top. Sculptures of plumed serpents run down the sides of the northern balustrade. 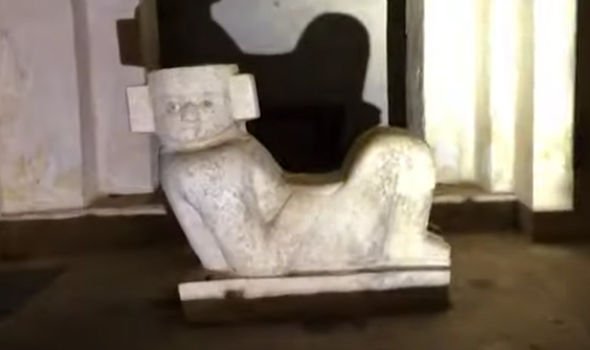 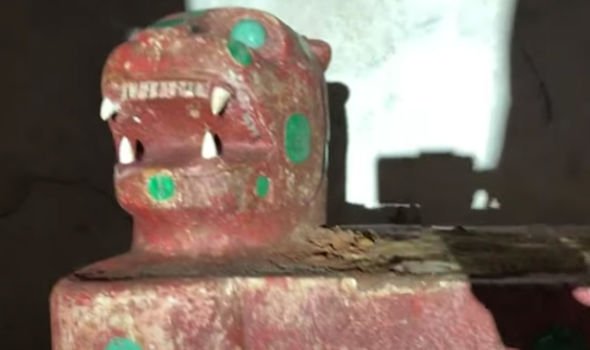 Around the spring and autumn equinoxes, the late afternoon Sun strikes off the northwest corner of the pyramid and casts a series of triangular shadows against the northwest balustrade, creating the illusion of a feathered serpent “crawling” down the pyramid.

All four sides of the pyramid have approximately 91 steps which, when added together and including the temple platform on top as the final “step”, produces a total of 365 steps

That number is equal to the number of days of the Haab’ Mayan calendar year and likely is significantly related to rituals.

It comes after an “impossible” discovery of foundations dating back to 500AD were made in Puuc – a region of Yucatan – rewriting the history of the region.

It was uncovered in the ancient “forgotten” town of Kiuic – abandoned by the civilisation 1,200 years ago.

First documented in print by John Lloyd Stephens and Frederick Catherwood in the 19th century, modern-day archaeologist Dr George Bey has been excavating the area for a large part of his life.