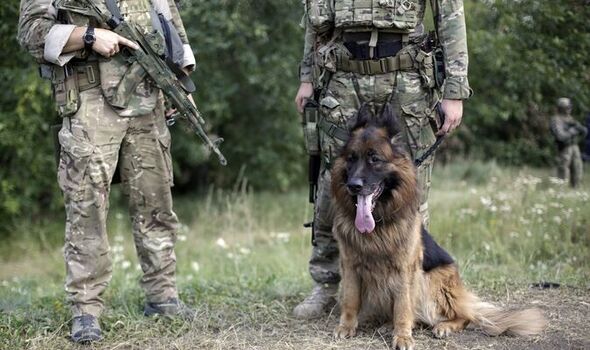 Max, a three-year-old Belgian Malinois, swapped sides after he was found by Ukrainian troops, starving and abandoned in the line of fire. The special forces pup is now being trained to sniff out unexploded mines alongside the soldiers who are defending their country. He belonged to Russian troops who had captured a village in the Mykolaiv region close to the Black Sea.

Max was dumped when Putin’s ­forces retreated and, according to the soldiers, survived on ­rotting food.

But he has now become a “real favourite” of Ukrainian fighters.

A member of the National Guard of Ukraine, named Dmitry, told the Daily Star: “From now on, Max will serve on the right side, defending Ukraine and nibbling Russian asses.”

Another soldier added: “Max has become a real favourite with the guards.

“We can’t understand why the Russians would leave behind such as lovely animal.

“Ukrainians love dogs, they regard them as part of the family.”

When Max was found he was wearing a camouflage collar ­issued to Russian military dogs.

A British special forces soldier added: “Malinois are the same breed used by the SAS and the SBS. They are brave, highly intelligent and athletic animals.

“They are tremendously loyal but Max has obviously been ­convinced that the Ukrainians are now his new masters.”

As the devastating war in Ukraine rages on for over two months now, multiple reports have come to light about Russian soldiers treating animals poorly.

Animal rights activists have reported shootings and killings of animals by the Russian Army.

Some cases of torture and mutilations have also been reported.

Over the past week, Russia has stepped up its attack in Ukraine’s east and south, pounding the Donbas and Mykolaiv regions with airstrikes and artillery fire.

On Sunday, Ukraine ruled out a ceasefire or any territorial concessions to Moscow.