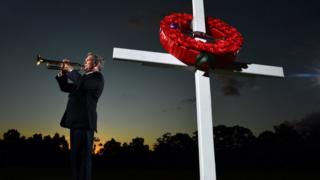 Across Australia and New Zealand, thousands of people have stood outside their homes at dawn to mark Anzac Day, after households were urged to pay tribute even amid coronavirus lockdown.

The national day of remembrance is a hugely important event for both nations and usually crowds gather for services.

However these were cancelled last month amid wider restrictions on gatherings.

Instead people were urged to hold a candle in their driveways and live stream services.

New Zealand Prime Minister Jacinda Ardern had acknowledged the disappointment in the ceremonies being cancelled for the first time in history.

“But that doesn’t mean we can’t show our support as a collective,” she had previously said.

“As dawn breaks, we can stand at the end of those driveways … together in silence and pay tribute to those we should never forget.”

Australian Prime Minister Scott Morrison attended a closed dawn ceremony at the Australian War Memorial in Canberra, which began at 06:00 and was broadcast nationally.

On Friday he had told Australians: “I look forward to the entire nation, on their driveways, lighting up the dawn, remembering our heroes and drawing inspiration from them for the task and challenge we currently face.”

Some of the alternative, home-bound tributes reported on Saturday included musicians playing the Last Post on brass instruments in suburbs, while others shared pictures of poppy wreaths online and baked Anzac cookies at home.

Australia’s veterans group, the Returned Services League (RSL) also encouraged “diggers” – service men and women – to call each other in lieu of the normal marches and parades.

The two nation’s joint Anzac Day services at Gallipoli in Turkey are traditionally a pilgrimage for many citizens, but these were also cancelled after travel bans were brought in.

What does Anzac Day represent?

It marks the anniversary of the first campaign that led to major casualties for the Australia and New Zealand Army Corps (Anzac) during World War One.

On 25 April 1915, soldiers from both countries landed at Gallipoli Cove in Turkey, part of an Allied effort to capture the peninsula from the Ottoman Empire.

Collectively termed Anzacs by a military clerk keen to fit the name on a rubber stamp, the acronym stuck.

After an eight-month campaign, the Allies retreated in defeat after heavy losses on both sides. More than 87,000 Turks died, along with an estimated 44,000 men from the British Empire and France, including about 8,500 Australians and nearly 3,000 New Zealanders – one in four of the Kiwis sent to Gallipoli.

It was the Anzacs’ first major engagement on the world stage, fought by the grandfathers and great-grandfathers of today’s Australians and New Zealanders.

The first Anzac commemorations were held in 1916. These have morphed into big-budget productions in Australia, New Zealand and Turkey.