BBC Weather meteorologist Carol Kirkwood signalled autumnal weather will be a key trait of the first week of September as she warned rain and wind will remain the main feature in the coming days. Ms Kirkwood said temperatures on Tuesday morning will be slowly climbing up from single figures in some areas but fail to reach past 20C in most of the UK. The forecaster said: “If you’re out and about first thing this morning, in the next hour or so, these are the kind of temperature values you can expect.

“By no means are they the lowest, but at the moment in Durham it’s only 4C, in Aberdeen is only 6C.

“Not quite as the crow flies towards the west, look at the comparison with Aultbea, 15C already and that’s because we’ve got a weather front bringing in cloud and, eventually, some rain into the west.

“Today it’s going to be mainly cloudy although many of us are starting off with some sunshine, like yesterday, the cloud will build through the day then it will spread out.”

Ms Kirkwood said the unsettled weather is the result of an area of high pressure producing large amounts of cloud but insisted the system will “fizzle out” through the day. 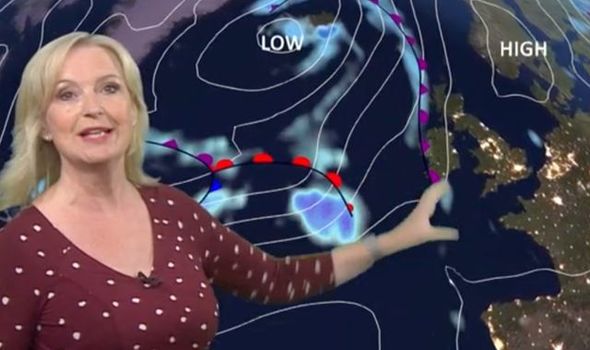 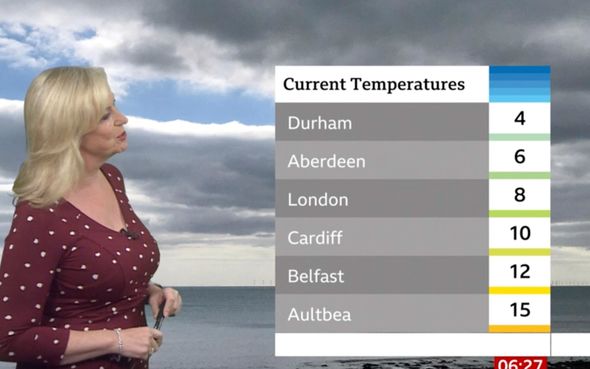 She continued: “What’s happening is that high pressure is still in charge of our weather. Here’s the offending weather front coming in from the west, introducing once again thicker cloud and also some rain. But as it bumps into the area of high pressure, it will tend to weaken and then fizzle out.

“So a bit of cloud this morning into the West Midlands into the west counties and also the western portion of Scotland.

“Much of that will thin for a time but, through the day, don’t forget, we’re going to see more cloud develop and it will spread. There will still be one or two brighter spells. The rain coming in through Northern Ireland clears, leaving a brighter afternoon and you’ll also see the fizzling out across Scotland.

“Temperatures 14C in the north to 19C in the south, so far many a little above where they were yesterday.” 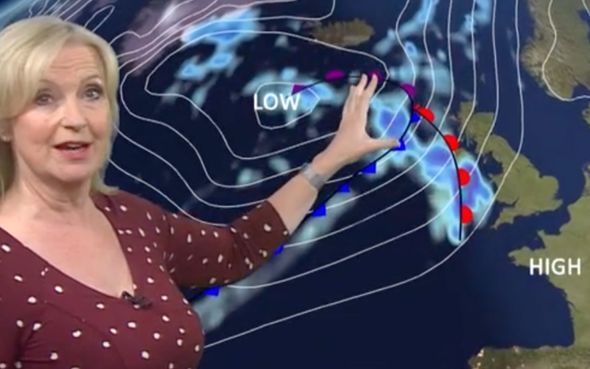 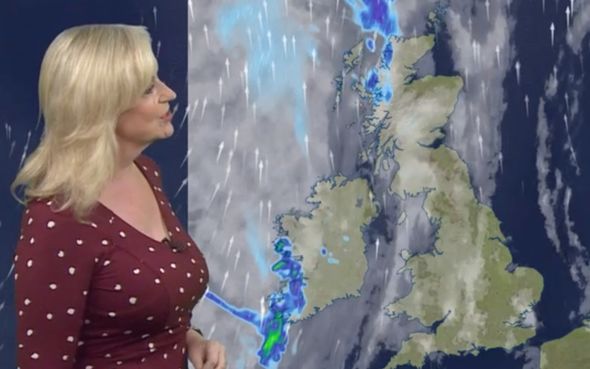 While the cloud is expected to fizzle out, some areas will still experience substantial levels of coverage through the night and warned a second weather system will be waiting to move in across the UK.

And the other thing that’s happening is we have the next system waiting in the wings and that’s going to bring some heavier rain and also some stronger winds. 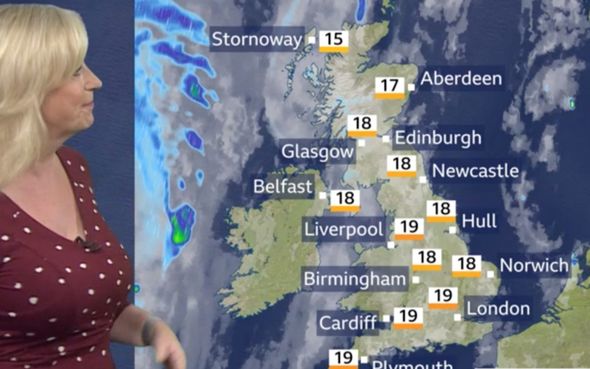 “That always tells you, when isobars are squeezed, there’s going to be wind. Strongest winds will be across the northwest, where once again we could have gusts of 40mph-45mph.

“Here comes the rain, pushing from the west to the east in the first front. Wherever you see greens and yellows, that means we’re looking at some heavier bursts.

“It probably won’t get into the far eastern quadrant of the country until after dark. So we’re looking at highs of 20C.”