BBC Weather: UK to be hit by strong winds and heavy rain

The BBC Weather meteorologist said that despite the unsettled weather, temperatures will continue to grow milder through the day. Western areas of the country will take the brunt of the heavy showers earlier on, with the Environment Agency issuing 65 flood alerts from south Devon through to Norfolk. Carole Kirkwood said: “It will feel milder but there will be showers to dodge. There’ll be some sunshine and we also got some rain in the forecast.

“Low pressure is driving our weather, this weather front sinking down southeast where it will be very slow to clear and you can see from all isobars, it’s going to be windy especially in the west.

“And especially in the northwest, where we’re looking at gusts up to 65mph so there goes that rain, very slowly clearing southeast. A rush of showers follow on behind, some of those will be heavy and thundery but in between them, there will be some sunshine.

The BBC Weather forecaster continued: “Through this evening and overnight, we eventually see the tail end of that rain clear, the showers pushed over towards the east. 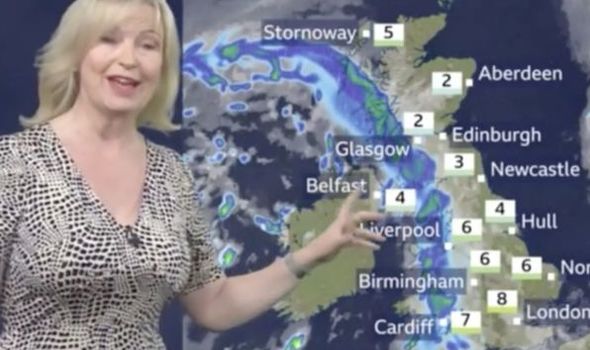 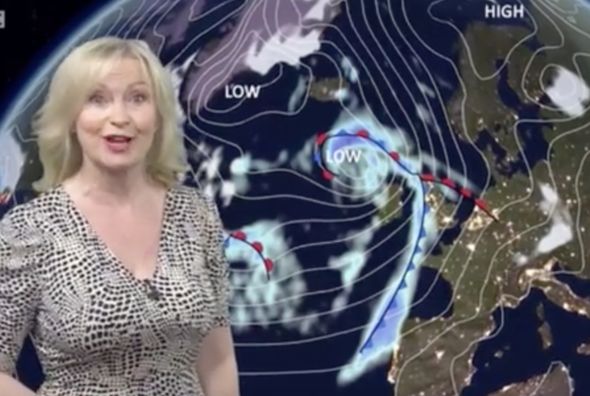 “Then there’s a dry spell before the next weather front comes in from the west bringing in yet more rain and, again, this will be heavy and it will still be windy.

“Not a particularly cold night but a little bit colder than it is now. As we head through tomorrow, that band of rain moves over from the west towards the east.

“There’s a curl coming into southern England and the Channel Islands, that will move a little bit further north through the course of the day.

“Showers in the west but, elsewhere, it should be largely dry but still very windy, especially across the northwest.” 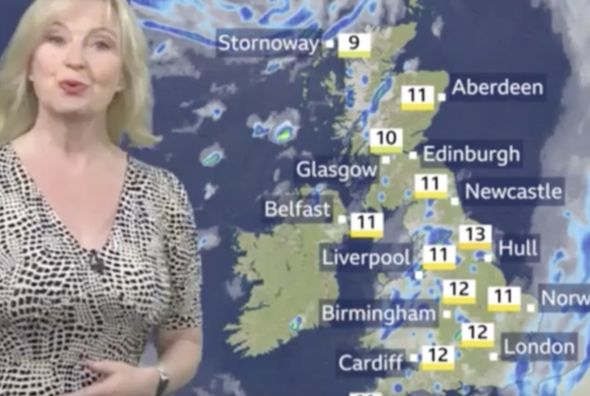 According to forecasters at MeteoGroup, Wednesday will be a generally dull day with variable amounts of cloud cover and some showers will develop.

Longer spells of rain across northern Scotland are expected with the warning they may be wintry at times and will be heavy across western areas. Showery rain will spread into the south-west by the evening

Thursday will be unsettled and overcast with outbreaks of rain spreading eastwards. 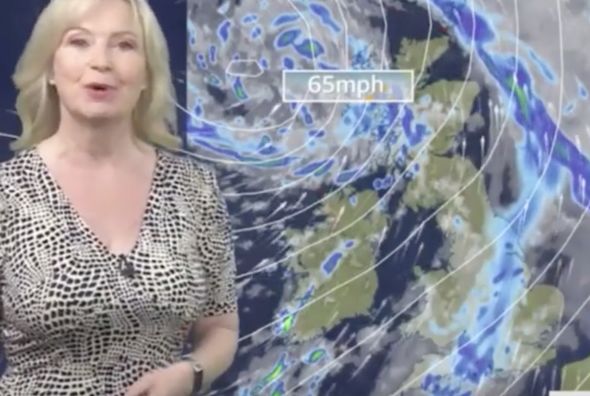 Rain will be heavy across parts of Scotland but mostly light and patchy further south.

Friday will remain cloudy and wet with another area of rain pushing eastwards during the day and will be heavy in the west.

BBC Weather’s long-range outlook warns of a “very cold easterly blast” during the first week of March, and says forecasters are monitoring signals of a return of the “Beast from the East”.

The BBC outlook from March 1 says: “We expect the colder, more blocked weather pattern with abundant high pressure to stick around for at least the first week of March.