BBC Weather forecaster Helen Willetts warned temperatures will once again reach highs of 72F (22C) this weekend for many in the country. But a new freezing weather front will see Scotland and Northern Ireland suffer a slump of up to 10C (50F) before the rest of the country follows suit next week. The meteorologist said: “Today it will be a little be cooler for the north coast of Northern Ireland, it’s going to just start to feel the effect of a northerly breeze.

“But even so the pollen levels are predicted to be high once again.

“There could be a few showers in the south-west of Wales through the afternoon and into the evening.

“They will continue overnight – just one or two. Perhaps one or two for the western isles increasing risk here and for the northern isles through the night, increasing chance as low pressure closes in from the north as well.

“So quite a chilly night, particularly for East Anglia, temperatures within a degree or two from freezing here. 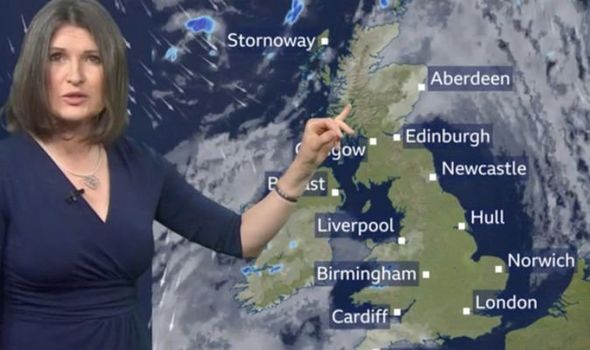 “But generally, not as cold as it has been. But it will feel cooler by day because this low pressure coming down from the north will introduce more of a north, north-easterly breeze. That’s a subtle change for tomorrow.”

She added: “There are some subtle changes on the way.

“That cooler setting across Northern Ireland and Scotland for the second part of the weekend.

“Then into Monday it will gradually move its way southwards as well, so everywhere will notice a gradual decrease in those temperatures.” 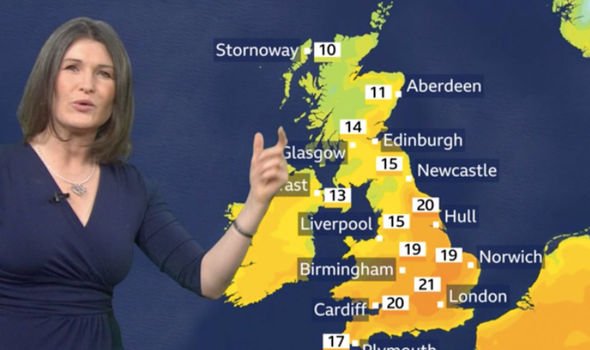 The country’s spell of glorious weather during the coronavirus lockdown peaked at 77F (25C) on Thursday.

Weather experts have warned Britons to prepare for a drastic change over the coming days as heavy showers roll in and temperatures fall.

Meteorologists at the Met Office predicted “a few showers for the south-west and Wales” on Saturday while it will remain dry elsewhere.

But they said “some longer spells of rain are possible in the south” on Monday and Tuesday. 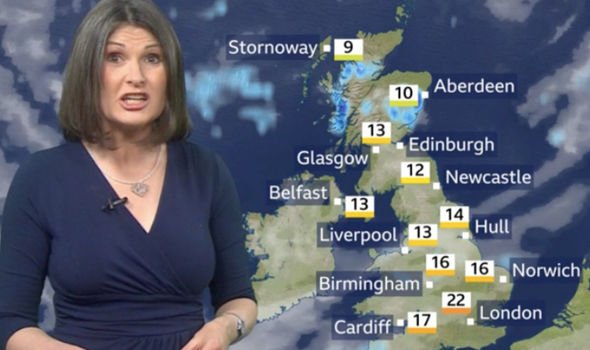 The Environment Agency has issued a total of eight flood warnings.

Groundwater flooding is also expected in numerous other regions.

The rivers are not expected to flood properties but the warnings of the agency could change as things progress.

They said the River Kennet, which is a tributary of the Thames, could flood roads and pavements.

River levels are high on the River Kennet between Ramsbury and Newbury as a result of raised groundwater levels,” the Environment Agency warned.

“Flooding of low-lying land, footpaths and roads is expected to continue, especially in the Knighton area.

“We are expecting dry weather over the next few days, however, river levels will remain high.

“We are closely monitoring the situation. Please remain safe and aware of your local surroundings and avoid contact with floodwater.”