BBC Weather forecaster Matt Taylor noted the whole UK will experience a substantial temperature drop in the aftermath of a balmy start of the week. Mr Taylor said sun and dry weather will remain mostly in control from Thursday through the weekend despite the breezier conditions. The BBC Weather meteorologist said: “A bit of breeze stirring in, particularly if you look at the forecast for today, it has brought a fresher start to many parts of the country.

“Still with temperatures in the mid-teens across some southern parts, but single figures further north to start the day.

“Lots of sunshine to the east of the country but there is some mist and low cloud across some northern and western areas. Across the western half of England and Wales that will continue to break up through the morning, allowing more in the way of sunshine.

“But across the north and western Scotland, a thicker cloud compared to yesterday so not as much sunshine.

“Just a little bit of drizzle at the moment, there could be some spots of light rain later and temperatures here, actually, up a little bit on yesterday.” 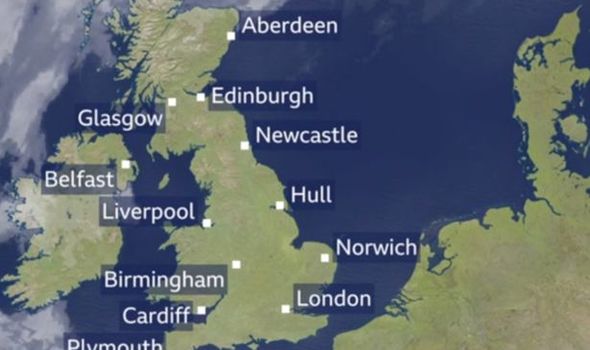 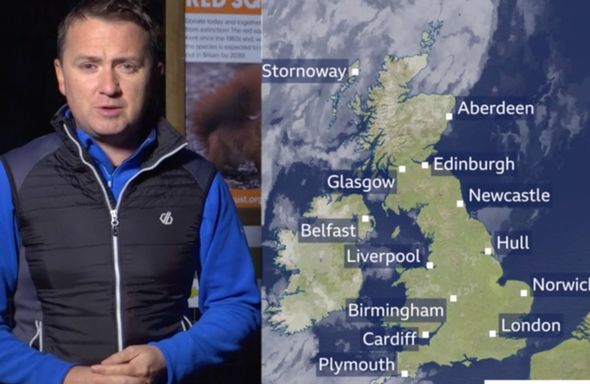 He added: “It could turn to 21C while further south down compared to what we saw yesterday. At the highest 21C to yesterday’s 27C across parts of Dorset.”

Mr Taylor said mist and fog are expected to return overnight as temperatures further lower before returning to average levels on Friday.

The BBC forecaster continued: “Through this evening and overnight, a few mist and fog patches could return away from the south, there is too much breeze here.

“Still some thicker cloud across the northern half of Scotland, most will be dry. 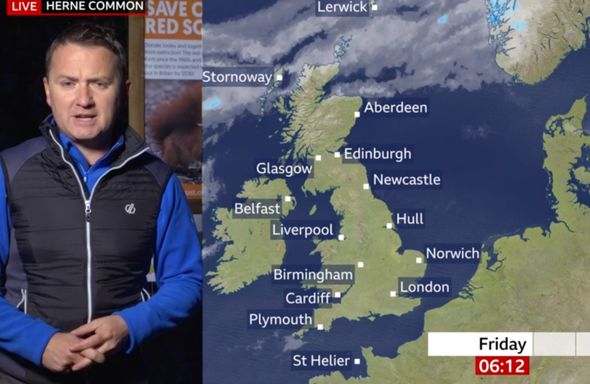 “Under those clear skies it will be another fresh night – temperatures dropping back down into single figures.

“But the emphasis is on dry weather, that will continue as we go through into Friday, lots of sunshine to come across for most part of the country too.

“Still some cloud lingering across the north of Scotland, bringing some showers, a little bit more of a breeze.

“Light breeze through central areas of the UK, but in the south that breeze will pick up bringing low teens to low 20s.” 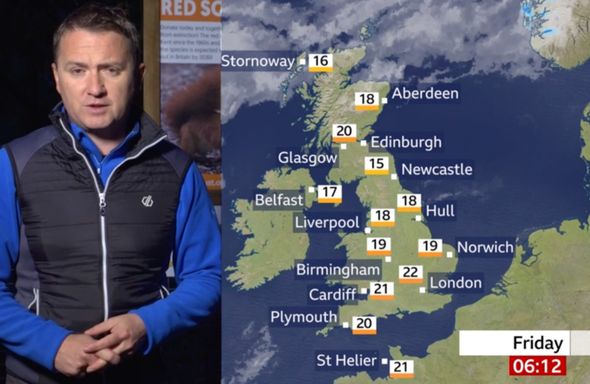 The Met Office forecast a break in the dry period, with some drizzle across the north and northwest of the country.

The rain is expected to ease from the weekend but some showers could develop south on Saturday evening.

The forecast warned: “Some heavy showers in south Sunday, but sunshine for many.

“Mist clearing to further sunshine Monday. Remaining mainly dry with sunny spells and light winds for most at the start of next week.”

They added: “Any isolated mist and fog patches each morning quickly clearing. Less breezy but still a chance of showers in the south. Temperatures around average for many though probably warm in the south.”