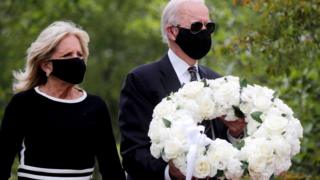 US Democratic presidential candidate Joe Biden has made his first public appearance after more than two months in quarantine amid the Covid-19 crisis.

Wearing a black face mask, the former vice-president laid a wreath at a ceremony in his home state of Delaware.

It was part of event to mark Memorial Day – an annual holiday held on the last Monday of May in honour of those who died serving in the US military.

The date also marks the unofficial start of summer.

“It feels good to be out of my house,” Mr Biden told reporters through his mask, adding: “Never forget the sacrifices that these men and women made. Never, ever, forget.”

Standing alongside his wife Jill, the 77-year-old then presented a wreath of white roses at Delaware’s War Memorial Plaza, before observing a moment of silence to commemorate the military personnel who fought in World War Two and the Korean War.

Mr Biden last made a public appearance about 10 weeks ago. Shortly before defeating his Democratic rival Bernie Sanders in primary elections in Florida, Illinois and Arizona, the presidential candidate was forced to self-isolate because of the spread of coronavirus.

Following the election results, he gave a webcam speech appealing for Mr Sanders’ supporters from his home in Wilmington, Delaware, where he has continued his virtual campaign.

Meanwhile, US President Donald Trump and his wife Melania also took part in a wreath-laying ceremony as part of Memorial Day commemorations.

The president visited Arlington National Cemetery in Virginia and then the historic Fort McHenry in Baltimore.

Mr Trump, who has been reluctant to wear a face mask but said recently he would do so “where it’s appropriate”, appeared without any face coverings at both events on Monday.

The US has more coronavirus cases than anywhere in the world. It has over 1.6 million known infections and is nearing 100,000 deaths linked to the virus.

All 50 US states have now partially reopened after a two-month shutdown. However, remaining restrictions vary across the country.