Joe Biden says there’s ‘not going to be a recession’

This is the equivalent of an 0.9 percent annual rate of decline.

The 0.2 percent fall comes after a 0.4 percent decline in the first three months of the year, meaning that by many countries’ definition of the term, the US is already in a recession.

Faced with sinking public confidence, US President Joe Biden has tried to make the case that the economy remains sound, citing a low unemployment rate of 3.6 percent.

This week, ahead of the new data, he told reporters that the economy was “not going to be in a recession”.

The Republican party accused Mr Biden of trying to “rebrand” the recession, adding the ploy would not “reduce Americans’ suffering.”

In the US, a recession is not announced based on GDP alone, but on a broader ranger of factors including measures of income, spending and employment.

The GDP data will also likely be revised and refined in the coming months.

However, the report remains a damning indictement of the state of the world’s largest economy.

Consumer spending, which powers the majority of the US economy, remained positive overall but slowed to one percent annually.

Meanwhile business investment and construction activity both fell in the second quarter after rising in the first.

Home construction, sagged 14 percent at an annual rate under the weight of rising interest rates, which have put mortgages beyond the reach of more would-be home buyers.

The Federal Reserve had recently announced a substantial rise in interest rates to tackle skyrocketing prices.

It increased rates by 0.75 percentage points, targeting a range of 2.25 percent to 2.5 percent. 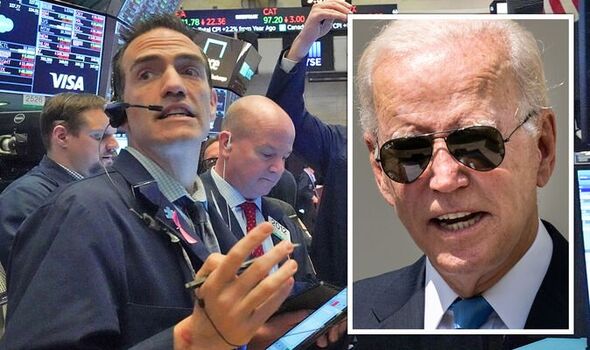 Aditya Bhave, senior economist for Bank of America, said: “We don’t think we’re in a recession just yet.

“But the bigger point here is that the underlying trend in domestic demand is weakening. You see a clear deceleration from the first quarter.”

The White House has argued that the slowdown is part of an inevitable and necessary transition to a period of steadier growth after last year’s rapid recovery.

Harvard professor Jeffrey Frankel, who previously served on the National Bureau of Economic Research committee, who make the official declaration of a recession, said he did not think a recession started at the beginning of the year, citing growth in jobs.

However, he was less confident about the US’s chances of dodging a recession before the year is out.

He said: “Things have already slowed down, so I’m not saying that everything is great.

“Odds of a recession going forward are substantially higher than for a random year.”

The professor added: “Every knowledgeable macroeconomist knows that recession in the US is not defined by a mechanical rule.

“But given the polarisation of politics, there are people who are going to be cynical about it and assume the worst.”