The UK is approaching its coronavirus peak, but questions are being raised about financing crisis mitigation plans. 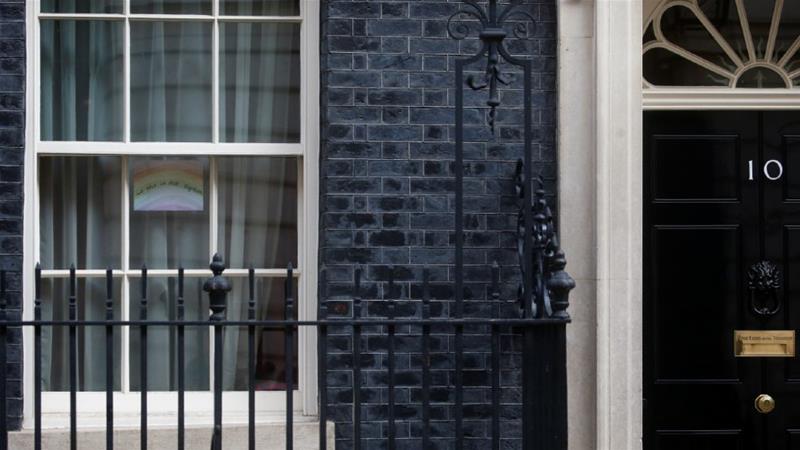 The United Kingdom’s Prime Minister Boris Johnson left intensive care on Thursday evening as he continues to recover from coronavirus, but he remains under close observation in hospital, his office said on Thursday.

Johnson, 55, was admitted to St Thomas’ Hospital on Sunday evening with a persistent high temperature and cough, and was rushed to intensive care on Monday where he spent three nights receiving treatment.

“The prime minister has been moved this evening from intensive care back to the ward, where he will receive close monitoring during the early phase of his recovery,” a spokesman from his office said in an emailed statement.

“He is in extremely good spirits.”

Johnson was the first world leader to be hospitalised with coronavirus, forcing him to hand control of the world’s fifth-largest economy to Foreign Secretary Dominic Raab, just as the UK’s outbreak approaches what experts expect will be its most deadly peak.

Raab told a news conference it was too early to end the nation’s lockdown because Britain had not yet reached the peak of the outbreak.

The UK death toll in hospitals from coronavirus now stands at 7,978. Thursday saw a rise of 881 in a single day – but a smaller daily increase than the 938 seen in Wednesday’s figures.

Raab tweeted that the improvement in Johnson’s condition was “the news we all wanted to hear”. United States President Donald Trump described it as “great news”.

Johnson’s ongoing recovery also prompted a small rise in the value of sterling against the US dollar.

However, the government statement did not give any details on when Johnson may be able to resume leadership, and Raab – speaking before the latest announcement – had stressed the importance of allowing the prime minister to focus on recovery.

Raab is deputising for Johnson during the most stringent shutdown in Britain’s peacetime history, and paid tribute to a host of people helping the nation through the crisis: National Health Service workers, care providers, supermarket workers, delivery drivers, cleaners, public servants, charity workers and those helping others in their neighbourhoods.

“I think you’ve certainly made us all think long and hard about who the ‘key workers’ are in our lives,” he said.

On Thursday, the Home Office issued new guidance on its post-Brexit plans to reform immigration, and came under fire for not including so-called “low-skilled workers” in its proposed points-based system.

With Johnson absent and the death toll mounting, the UK government is wrestling with two major issues: how to finance a vast increase in state spending to support the shuttered economy, and when to start easing lockdown measures.

With the economy facing potentially the worst hit since World War II, the government said it had expanded its overdraft facility with the Bank of England (BoE).

The central bank has agreed temporarily to finance government borrowing – effectively giving the government an unlimited overdraft facility – in response to the crisis if funds cannot immediately be raised from debt markets, reviving a measure last widely used during the 2008 financial crisis.

The BoE said it was a short-term measure, and both it and the government said any borrowing from the Ways and Means facility would be repaid by the end of the year.

In 2008, the government ran its overdraft up to nearly 20 billion pounds ($25bn). It may have to go further this time if bond investors balk at a possible doubling of its debt issuance to around 285 billion pounds ($355bn), according to some forecasts.

The BoE’s move means it is now more directly involved in the government’s finances than either the US Federal Reserve or the European Central Bank (ECB).

The ECB has moved to target its firepower more towards struggling eurozone countries, but is constrained by German opposition to easy money. But a second day of crisis talks between European finance ministers eventually led to a breakthrough.

French Finance Minister Bruno Le Maire said European Union member states had agreed to mobilise one trillion euros ($1.09 trillion) to shore up the economy in response to the coronavirus crisis, in the most important economic plan in the EU’s history.

Le Maire said on a call with reporters that the European Stability Mechanism would be activated with light conditionality. He also said the agreement will make 500 billion euros ($546bn) available immediately and that a recovery fund would follow.

“Europe has shown that it can rise to the occasion of this crisis,” Le Maire said on Twitter.

Bank of England Governor Andrew Bailey has stressed that monetary financing – linked to hyperinflation in 1920s Germany and later Zimbabwe – remained anathema to central bankers, and the BoE could rein in its UK stimulus plans if inflation threatens to take off.

Economists said time would tell whether the BoE’s move represented a practical, temporary step to help the government fund its coronavirus spending splurge, or the end of the era of central bank independence in Britain.

Peak not yet reached

The government has made pledges costing tens of billions of pounds to support businesses and workers hit by the virus. On Thursday, the government said an additional 1.2 million claims for Universal Credit welfare payments had been filed since March 16 – though that number is not necessarily an indication of those who are newly unemployed.

Raab said that the peak of the virus outbreak had yet to be reached, and that the government would not be able to say more about the duration of the lockdown until late next week, once experts have had a chance to analyse data on how well it is working. It was introduced last month.

“The measures will have to stay in place until we’ve got the evidence that clearly shows we’ve moved beyond the peak,” he said.

“We mustn’t give the coronavirus a second chance to kill more people and hurt our country. I know it is tough going, but this is a team effort,” said Raab.

While Johnson’s condition was improving, the likely length of his recovery remained unknown, with some political commentators saying there was a power vacuum in his absence.

Raab said on Thursday he had the power to make “necessary decisions” in the prime minister’s absence and that government would continue to follow the strategy set out by Johnson. He said the cabinet could take decisions collectively.

The UK is entering what scientists say is the deadliest phase of the outbreak, with deaths expected to continue to rise over the long Easter weekend (April 10-13).

But in a sign the shutdown measures were working, health officials have said the number of coronavirus infections and hospital admissions had begun to show signs of flattening.

Police said they would be taking tougher action to enforce the existing restrictions on movement over the four-day Easter holiday weekend because many people were continuing to ignore the ban on social gatherings. On Thursday, a group of academics said that new police powers could disproportionately affect young black men.

One county police chief was forced to clarify comments made earlier on Thursday, after suggesting officers could end up checking people’s shopping trolleys in supermarkets. Northamptonshire Chief Constable Nick Adderley’s remarks had not gone down well with government figures, with Home Secretary Priti Patel denouncing the suggestion in an afternoon radio interview.

“That is not appropriate, let me be clear on that. That is not the guidance,” she told talkRADIO, adding the government was “absolutely not” planning more restrictive lockdown measures.