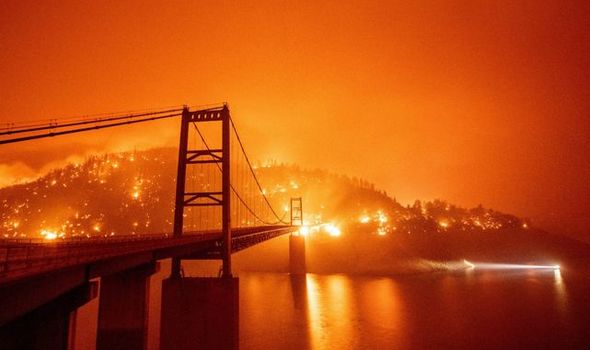 The 22,000 residents of South Lake Tahoe were issued with a new warning after the Caldor Fire encroached onto the Tahoe Basin on Sunday.

The announcement came on Sunday night after local firefighters struggled to hold back the two-week blaze.

Yesterday, California’s Fire Department published details about the number of people who have been evacuated.

Across the whole of the Golden State, which is America’s largest state, over 32,000 residents have been evacuated.

Jeff Marsoleis, forest supervisor at El Dorado National Forest, said: “Today’s been a rough day and there’s no bones about it.”

Eric Schwad, California’s Fire Division Chief, added: “To put it in perspective, we’ve been seeing a half-mile movement on the fire’s perimeter each day for the last couple of weeks, and today, this has already moved at 2.5miles on us, with no sign that it’s starting to slow.”

The San Francisco Chronicle says even patients at the Barton Memorial Hospital in South Lake Tahoe are being evacuated.

Much of the Golden State has now been engulfed by the flames.

The blaze first broke out in California on August 14.

Around two-fifths of the flames were reportedly contained after they burnt through nearly 245 square miles – an area larger than Leeds.

Around 472 homes have been destroyed and over 21,000 structures threatened.