US TV host Reid on Tuesday said Donald Trump radicalises his followers ‘the way Muslims’ do. 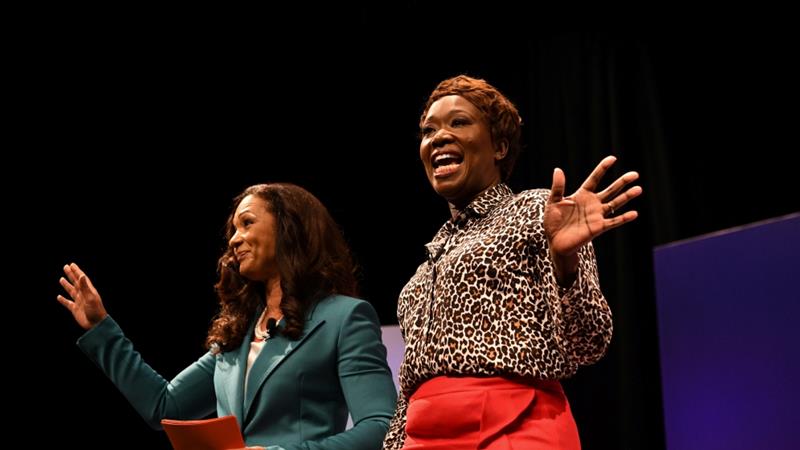 Civil organisations in the United States are calling on MSNBC host Joy-Ann Reid to apologise for comments they claim are “Islamophobic”.

In a segment on the Tuesday airing of her primetime show the ReidOut, Reid discussed US President Donald Trump’s unwillingness to reprimand Kyle Rittenhouse, who authorities claim murdered three people with an assault rifle during Black Lives Matter protests.

Reid began her controversial comments: “When leaders, let’s say in the Muslim world, talk a lot of violent talk and encourage their supporters to be willing to commit violence including on their own bodies in order to win against whoever they decide is the enemy, we in the US media describe that as they are ‘radicalising’ these people, particularly when they’re radicalising young people.”

“That’s how we talk about the way Muslims act,” she added. “When you see what Donald Trump is doing, is that any different from what we describe as radicalising people?”

this is islamophobia, she should apologize immediately. pic.twitter.com/2geymhcBOr

While the comments initially did not receive much attention, they were heightened after it was widely shared on social media.

The comments have come under fire from advocacy groups and legislators alike.

“Reid must apologize on air tonight for spreading the false, dangerous myth that Muslims are inherently radical and violent. MSNBC also needs to take action to ensure anti-Muslim bigotry has no place on its network,” Muslim Advocates, a national civil rights organisation, said in a statement.

“Words have great power. Joy Reid has an important platform and an essential voice in addressing civil rights, race relations, and other important national issues,” Margaret Huang, president and CEO of the Southern Poverty Law Center, a nonprofit legal advocacy organisation, said in a statement emailed to Al Jazeera.

“But, especially because we admire Reid, we call on her to recognize the impact of her comments and make an on-air apology for her words, which repeated painful anti-Muslim stereotypes. SPLC would be pleased to join other civil rights and Muslim leaders in a meeting with Reid and her producers to discuss how the impact of her words perpetuates harmful stereotypes.”

Representatives Ilhan Omar and Rashida Tlaib, two of the first Muslim women elected to the US Congress, both called for an apology.

Words matter and these words feed into the harmful anti-Muslim rhetoric & actions that we continue to see in this country. It is even more painful to hear it from someone I admire.

We deserve an apology. https://t.co/Ei1R4FojZJ

Tlaib said: “These words feed into the harmful anti-Muslim rhetoric & actions that we continue to see in this country. It is even more painful to hear it from someone I admire,” while quoting a tweet from Omar which called “casual Islamophobia … hurtful and dangerous”.

Others, such as conservative writer and occasional MSNBC guest Jennifer Rubin, said Reid was only highlighting a double standard.

“She was making the point about a double standard. She was not AGREEING with it,” Rubin said on Twitter.

MSNBC was not immediately available for comment on Tuesday and has yet to issue a public statement on the matter.

Reid has previously faced criticism for remarks made on a blog which were considered derogatory towards Muslims and the LGBTQ community. Reid apologised for those remarks.