As Britons enjoyed a taste of freedom after months of lockdown, Italian business owners railed against further restrictive measures being implemented to curb the spread of a third wave of infections that is ravaging the Continent. Hundreds of demonstrators cried “we are the workers” as some launched rocks, bottles and fireworks at lines of police in riot gear as they attempted to keep order. According to local reports, the clashes broke out after they were stopped from reaching Prime Minister Mario Draghi’s office in the Italian capital.

Italy was locked down again over the Easter holidays, with all restaurants, cafes and bars ordered to shut except for takeaway.

And now landlords fear they’ll never open their doors against with no end in sight for the country’s Covid crisis.

Many bosses blame the EU’s snail-paced vaccination rollout for their continued lockdown misery they are set to suffer.

Speaking at the demonstration in Rome, Silvio Bessone, a chef from the northern Piedmont region, told Reuters: “The problem is we just don’t know what to do. 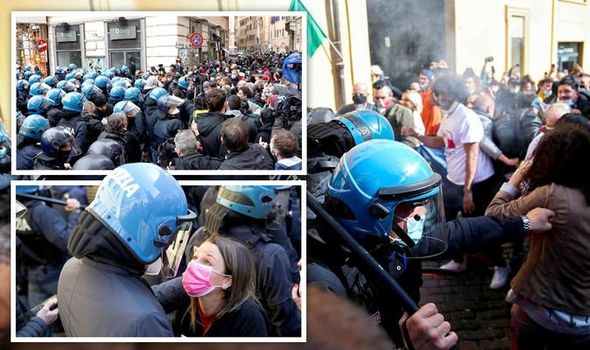 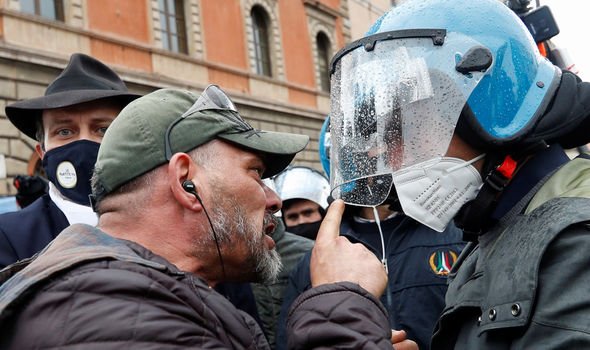 “They tell us that we can only do take-aways, but in my neighbourhood with a population of 3,000, what kind of take-aways can I do?”

Restaurateur Maurizio said his business was near failing because of the lockdown measures.

He told AFP: “To the Health Minister Spereanza I want to say ‘Reduce your salary by 80 percent and let’s see how many of these people will make it’. Because I cannot keep my company open like this.” 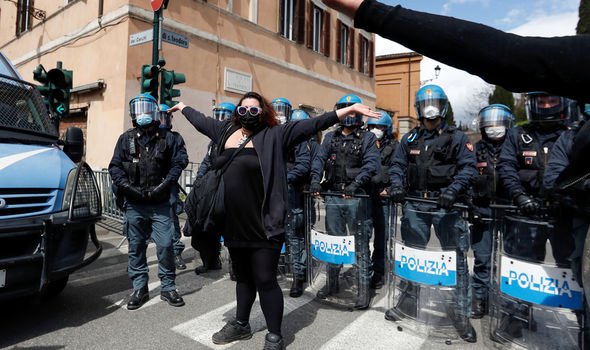 PM Mr Draghi blamed Brussels’ failed joint buy-up of Covid jabs for a shortfall of doses and has called for eurocrats to ban the export of the life-saving medicine to help get the bloc’s ailing scheme back on track.

Around 9 million Italians have now received at least their first dose of a coronavirus vaccine since the country began its rollout late last year.

In comparison, some 32.2 million people have been given a first dose in Britain, with another 7.7 million fully vaccinated after a second shot. 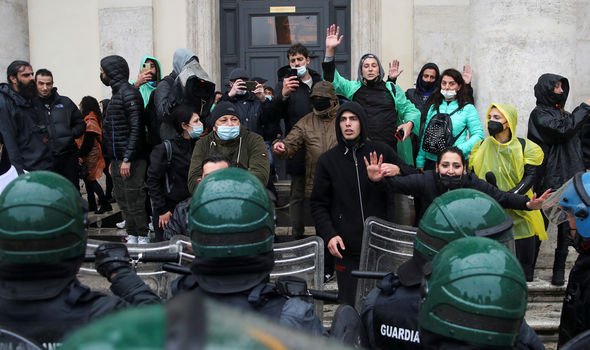 Last week Mr Draghi said he hoped to lift a number of his coronavirus measures by the end of the month if the health data improves.

Rome has imposed numerous restrictions over the past 14 months to curb the spread of COVID-19, which has killed more than 114,000 in Italy.

While the initial lockdowns were widely accepted, the Italian public has railed against further curbs.

Boris Johnson says low figures are due to lockdown

There has been a number of violent protests, including in Naples over the weekend, amid growing anger over the Italian government’s handling of the pandemic.

The Italian death toll continues to rise, with another 358 Covid-related fatalities recorded by the authorities on Monday.