Chelsea, 40, first entered the White House as the daughter of US President Bill Clinton in 1993 when she was 12 years old. She later supported her mother Hillary Clinton in bid to be the Democratic Party’s presidential nominee in 2008, as Secretary of State in the Obama administration, and as the party’s candidate in 2016. Ultimately, Mrs Clinton lost to Donald Trump, however, but Chelsea has not stopped opposing the government.

She appeared on The Late Show in March 2018 and sent the host into a frenzy over her response to one of his questions.

Mr Colbert asked her: “How do you guys talk about this at home? Come on, spill the tea.

“How do you guys talk about Donald Trump? Give me a conversation you had recently.”

At first, Chelsea just exclaimed “Goodness!” to which Mr Colbert asked: “That’s the strongest language you use? Gee williker!” 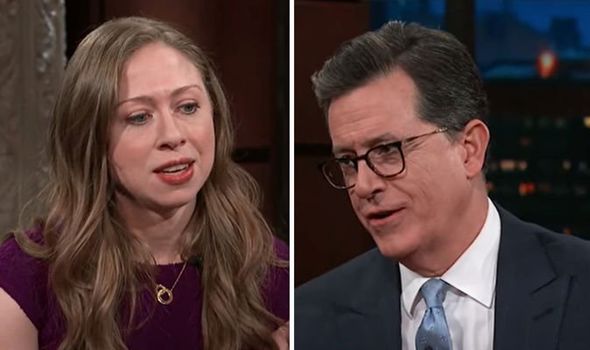 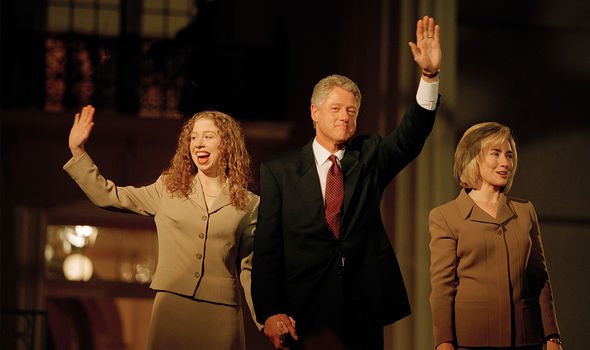 Then, Chelsea launched into a slightly robotic paragraph as to how her family discuss dealing with an administration they don’t like.

She said: “We just talk about what we should be doing today ‒ which organisations and candidates should we be supporting?

“How do you both stand in opposition to the degradation of norms and institutions, as well as the retrograde policies around voting rights, around womens’ rights, around transgender rights?

“And what do we do to keep pushing forward for the world that both my parents have been working on since before I was born and which I am really eager to help build for my children, for your children, for future generations. 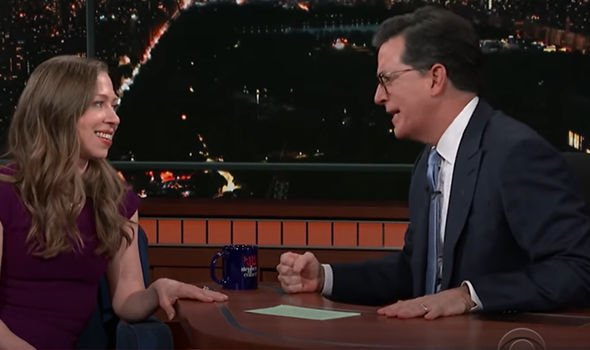 “Because, as you noted, the President I think thrives on anxiety and insults, there is always so much to talk about.

“And because I think, unfortunately, this administration is the collision of cruelty and incompetence, there’s so much going on even beyond the president on any given day.”

While the audience appeared to enjoy her level-headed attitude, as they erupted into applause half way through, Mr Colbert appeared to find it oddly infuriating.

He asked: “Does your entire family speak in paragraphs? Because that was a really beautiful paragraph there. 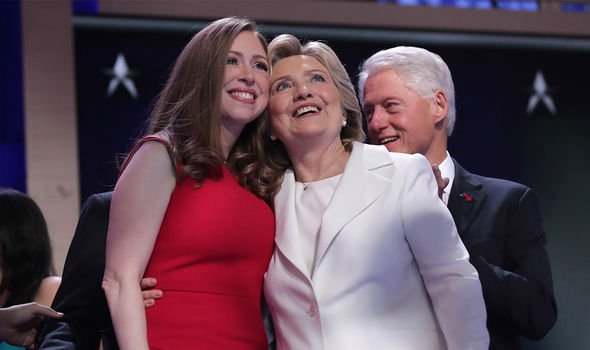 “It doesn’t get any sharper than that at home? No one ever throws a glass of chardonnay at the TV, ever?”

Chelsea replied that she does not think it is productive to respond like that.

Mr Colbert quipped: “It’s not productive, but it feels so good.

“You must have some weaknesses, show one, come on, be human here! What have you yelled about?”

Still resolutely calm, Chelsea said she would rather go to a protest or convince more people to vote in the mid-term elections.

These mid-term elections in November 2018 ended up being somewhat a success for the Democrats, who gained 41 seats in the House of Representatives and thus took control of the Chamber.

Nancy Pelosi became the new Speaker of the House and has since traded verbal blows with the President on a number of occasions.

Chelsea, meanwhile, has continued to criticise the government, especially in relation to its handling of the pandemic in recent months.

She has even spoken out against her former friend Ivanka Trump, who she said she has no sympathy for, because she has chosen to work for her father out of her own free will.

Chelsea branded the whole administration “a collision of cruelty and incompetence” and implied that the First Daughter is part of that.