China asks visa applicants to get inoculated with Chinese-made vaccines. 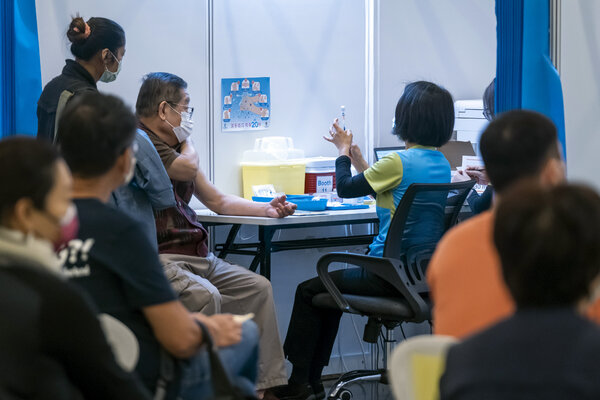 BEIJING — China raised the stakes in the international vaccine competition on Saturday, saying that foreigners wishing to enter the Chinese mainland from Hong Kong will face fewer paperwork requirements if they are inoculated with Chinese-made coronavirus vaccines.

The policy announcement, which covers foreigners applying for visas in the Chinese territory, comes a day after the United States, India, Japan and Australia announced plans to provide vaccines more widely to other countries. The four so-called Quad powers promised to help finance the production in India of at least a billion doses of coronavirus vaccine by the end of next year.

China is trying to increase the international appeal of its shots, even as scientists and foreign governments urge Chinese vaccine makers to be more transparent with their clinical trial data. Guo Weimin, a Chinese government spokesman, said that China had sent vaccines to 69 countries by the end of February and begun commercial exports to 28 countries.

Chinese state media organizations have also begun a misinformation campaign that questions the safety of the Moderna and Pfizer-BioNTech shots and promotes Chinese vaccines as better alternatives.

Chinese-made vaccines have not yet been approved by most regulators in the West. China has not yet approved the manufacture or distribution of foreign vaccines within its borders either.

This week, China introduced an international electronic passport for its citizens that shows whether a traveler has been vaccinated against the coronavirus. But it was not immediately clear how much of a difference Saturday’s policy announcement by the Chinese Foreign Ministry would make for foreigners living in Hong Kong, given that China has been issuing almost no visas lately.

In addition, Hong Kong’s borders have been closed to nonresidents for nearly a year. So the new policy will not help many foreigners in other countries who want to return to mainland China for work or family reasons.

Alan Beebe, the president of the American Chamber of Commerce in China, said that border restrictions had become the biggest concern for multinationals doing business in the country, and he questioned the need for restricting entry based on which vaccine was chosen by travelers.

“It’s not clear to us,” he said, “what is the difference between having an imported vaccine and one that is produced in China.”