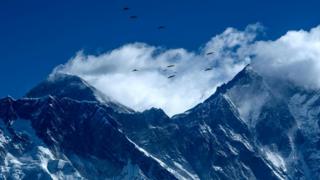 Over two dozen Chinese mountaineers have begun an expedition on Everest as the site remains closed to foreign climbers because of coronavirus.

Only Chinese climbers are permitted this spring season because of the pandemic, operators told the BBC.

The highest peak of the world stands on the border of China and Nepal and can be climbed from both sides.

China has closed its side to foreign climbers while Nepal has cancelled all expeditions in response to Covid-19.

The disease first emerged in central China three months ago. Around 3,300 people have so far died in the country after becoming infected.

China says it has now all but stopped the spread of the disease and the authorities have started to allow some access to Wuhan, the city in Hubei province where the outbreak began.

The Chinese climbers tackling Mount Everest were expected to reach the advanced base camp at an altitude of 6,450 metres (four miles) on Friday, expedition operators in touch with the China Tibet Mountaineering Association (CTMA) said.

Mountaineering record-keepers say that if the climbers make it to the summit, it would be a very rare case of only Chinese climbers at the peak.

“In Spring 1960, only the Chinese reached the summit. The Indians tried, but failed,” said Richard Salisbury, with the Himalayan Database, an organisation that keeps records of all expeditions in the Himalayas.

“There were various Chinese recon, research and training climbs from 1958 through 1967 when nobody else was on the mountain, but no ascents by any of them.”

Western expedition operators said China did not allow them to climb this spring season due to fears over a new outbreak of the virus.

“It is reasonable that they do not want to take the risk to let people from all over the world, where the coronavirus crisis is in full swing, into Tibet to gather in base camp,” said Lukas Furtenbach, an Austrian climber and guide whose team was initially supposed to climb from the Chinese side.

“As long as there is no quick and reliable antibody testing available, it is a wise decision to minimise risk and only have their own people that they can take into quarantine before climbing.”

Some expedition teams, including Mr Furtenbach’s, were preparing to switch over to the Nepalese side but Nepal too cancelled all expedition permits.

The Chinese mountaineers will now be climbing up and down the mountain between camps to acclimatise themselves with the high altitude before making the final push for the summit. It will take them at least one month.

Climbers wait for the right weather window for the summit climb. Summiting usually happens before the end of May, when the south-west Indian Monsoon arrives in the region.

The Chinese side of Everest sees fewer climbers compared to the southern side in Nepal. Climbers can drive right up to the base camp on the Chinese side, whereas in Nepal it is a 10-day trek through the Khumbu valley.

“Even from the base camp, they ride yaks to reach the advance base camp,” says Ang Thsering Sherpa, a veteran mountaineer in Nepal.

“It’s a very different experience of climbing on the northern side, compared to the Nepalese side.”

In recent years, avalanches, fast melting glaciers, and other global warming-related changes are said to have made climbing more challenging.