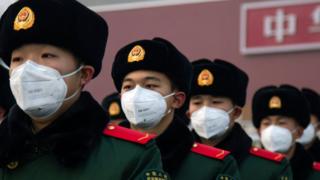 China’s National People’s Congress is a key date in Beijing’s choreography of politics and power.

It takes place this year as the country emerges from the virus crisis – and seeks to bolster its authority both on the domestic and the global stage.

It also follows months of pro-democracy protests in Hong Kong that have angered China’s leaders. The congress has proposed a new national security law that looks set to limit freedoms in the territory.

The annual meeting is usually scheduled for early March but was postponed because of the pandemic.

And, as much as that delay highlighted the severity of the crisis, its rescheduling is a show of strength and confidence – a sign, Beijing hopes, that things are under control.

China is where the pandemic started but it’s also the country that brought a large outbreak under control – with lockdown measures emulated by many other countries hit by the virus.

The economic fallout, though, remains dramatic – in the first quarter, China’s GDP contracted for the first time in decades.

Added to those domestic challenges, Beijing is facing increasing scrutiny and criticism from abroad over what it did – and didn’t do – when the virus emerged.

What is the National People’s Congress?

The NPC is China’s parliament, the top legislative body, and it usually meets once a year in early March.

Although in theory the country’s most powerful institution, it is seen as largely a rubber-stamp assembly in Beijing’s theatrics of democracy.

It usually approves whatever has been decided beforehand by the top echelon of the Communist Party.

Why is the Hong Kong proposal controversial?

Usually, the NPC is about unveiling the country’s key economic targets, approving budgets, and passing legislation.

This year will also see the discussion of a proposal for a new security law in Hong Kong that could ban sedition, secession and treason.

The proposal is highly controversial – when the Hong Kong government tried to pass similar legislation in 2003, about 500,000 people took part in street protests against it, and the legislation was eventually shelved.

A spokesman for the NPC said on Thursday that that legislation was “highly necessary” and would “safeguard national security in Hong Kong”.

However, pro-democracy activists believe that Beijing is slowly eroding Hong Kong’s judicial independence and other freedoms not enjoyed in mainland China.

The proposal is also controversial because it is expected to circumvent Hong Kong’s own law-making processes – leading to criticism that Beijing is undermining Hong Kong’s autonomy.

The draft motion is seen as response to months of pro-democracy street protests, that often ended in violent clashes, in Hong Kong.

What else is on the agenda?

Premier Li Keqiang – the number two in Chinese politics – is scheduled to speak on Friday, with his address possibly including the economic target for the year as well as fresh measures to stimulate the economy.

But after the depressing data from the first quarter, there’s doubt over whether there will a clear-cut growth target for 2020.

It’s also set to be a large affair. Nearly 3,000 delegates from around the country will gather in the Great Hall of the People in Beijing for 10 days. They represent China’s provinces, autonomous regions, centrally-administered municipalities, the special administrative regions of Hong Kong and Macau, as well as the armed forces.

There will also be a meeting of the Chinese People’s Political Consultative Conference (CPPCC), the most powerful political advisory body in the country – which does not have any legislative power.

While the NPC will meet on Friday, the CPPCC already kicked off on Thursday.

The importance of projecting power and strength

Failure to handle the economic fallout from the pandemic could undermine Beijing’s domestic legitimacy – a real problem for a regime that promises growing prosperity in exchange for authoritarian rule.

At least as important as the actual policy, will therefore be the desire to project power and control. State media have already touted the event as being of “historic significance” and an “opportunity to gather national strength”.

To the outside world, China will seek to project itself as a transparent and responsible power – a model for the rest of the world.

Despite being accused of suppressing early warnings, China insists it alerted the world of the severity of the virus in time. Beijing says other countries simply neglected to heed those warnings.

What is the virus situation in China?

The novel coronavirus broke out in late 2019 in Wuhan in China’s Hubei province. The country was the epicentre of the virus before it spread around the world.

But wide-ranging lockdown and quarantine measures eventually slowed the number of new infections to a single-digit trickle.

Out of about 84,000 confirmed infections, almost 80,000 have recovered while more than 4,500 have died. There are currently only a handful of active cases.

Concern over a second wave though remains. New clusters near the Russian border have brought home the dangers of re-importing the virus.

Overall though, the lockdowns are being lifted, schools are gradually reopening and economic activity is resuming.

What about the economic fallout?

The coronavirus pandemic is expected to have a profound impact on economies around the globe.

For China, we already have a shocking data point: in the first three months of the year, the economy contracted by 6.8%, the first contraction in decades.

In the last two decades, China has seen average economic growth of around 9% a year – although experts have regularly questioned the accuracy of its economic data.

But when the virus struck and Beijing introduced large-scale shutdowns and quarantines in late January, the economy in many parts of China ground to a halt.

Although factory work is resuming, the economic and social consequences of a slowing economy will continue.

China has already unveiled a range of support measures to cushion the impact – though not on the same scale of some other major economies.

The NPC might give us more clues as to how Beijing plans to put its economy back on track.

But with an export-dependant economy, much of the recovery will depend not just on China – but on how the rest of the world recovers.