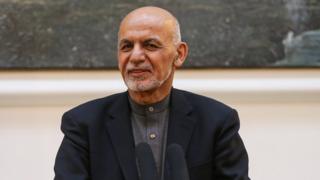 Afghan President Ashraf Ghani is in self-isolation after dozens of members of staff at the country’s presidential palace tested positive for coronavirus, according to media reports.

Twenty cases were initially reported, but on Sunday the New York Times said the number had risen to 40.

The Afghan government has not commented and there is no suggestion the president himself has been infected.

“Twenty-odd people are infected with COVID-19 in the presidential palace. However, it is [being] kept under wraps to ensure no panic is caused,” one government official told AFP on Saturday.

A Twitter post published by the presidential palace on Thursday showed him chairing a cabinet meeting via video link.

Afghan government figures from Saturday showed 933 confirmed cases of coronavirus in Afghanistan as a whole, with 33 deaths.

While the numbers appear low, the country has limited access to testing and the health system has suffered under decades of conflict.

There are also fears that the virus could have spread after more than 150,000 Afghans returned from virus-stricken Iran during March, while tens of thousands of others returned from Pakistan.