More lives could be lost on a coronavirus-infected ship where four people have died and the number of cases has quadrupled as it heads towards Florida, the operator has warned.

The alert from Holland America Line came as Florida’s governor said he does not want anyone from the Zaandam suspected of having COVID-19 being “dumped” at his doorstep.

It means that while the ship and a sister vessel, the Rotterdam, are heading towards the southern US coastline they do not yet have permission to dock and offload a total of more than 1,200 passengers, including some 225 British nationals.

Cheryl Deeks, 66, from Mendlesham in Suffolk, was transferred to the Zaandam from the Rotterdam at the weekend along with hundreds of others who passed a coronavirus health check.

While no longer on the stricken ship, she still faces huge uncertainty given Florida’s apparent reluctance to help. 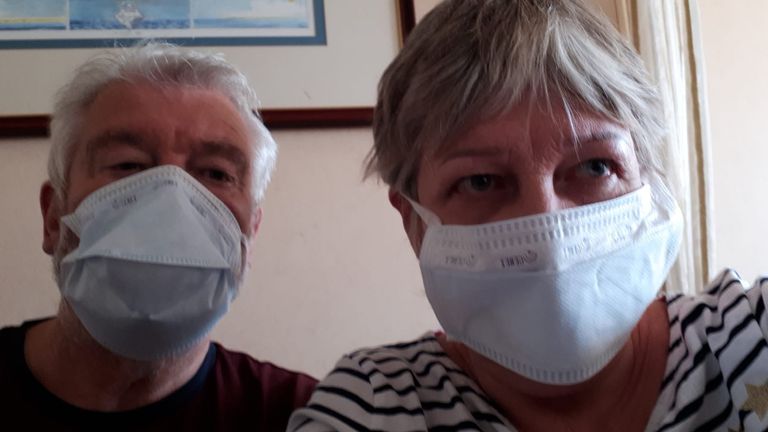 “I am disappointed to hear that America is even debating whether we should land or not,” Mrs Deeks said in a video message to Sky News on Tuesday.

“I can’t understand that. It’s a humanitarian rescue. We need to get to our homes. There are lots of Americans on board. It is America’s own port.

“I cannot understand why there is any debate whatsoever. We just want to get home.”

Her fate and that of other passengers as well as more than 1,200 crew on both ships is of huge concern to Orlando Ashford, president of Holland America Line. 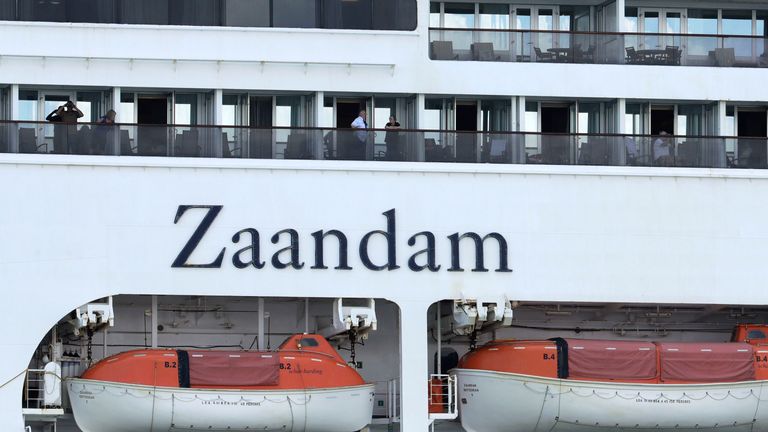 He revealed in a blog post on Monday that the number of passengers and crew to test positive for COVID-19 was eight, up from two last week.

In an extraordinary rebuke, Mr Ashford took aim at the international community for turning its back on the Zaandam as coronavirus fears spread across the world while the ship was off the coast of South America on a routine cruise earlier this month.

“We are dealing with a ‘not my problem’ syndrome,” Mr Ashford wrote.

“The international community, consistently generous and helpful in the face of human suffering, shut itself off to Zaandam leaving her to fend for herself,” he said.

He described how Chile, Peru and Argentina clammed up along with other South American ports. “Repeated requests for humanitarian consideration were denied,” Mr Ashford said.

“Then 22 March – one day after the voyage’s original end date – a few guests and crew began reporting influenza-like symptoms. Despite countless desperate pleas in the following days, we were forbidden to medevac critically ill patients to shore-side hospitals (usually standard operating procedure for comprehensive care that ships aren’t equipped to provide).

“Already four guests have passed away and I fear other lives are at risk.”

With the deaths and lack of assistance, Holland America Line took steps to help itself.

The company sent out the Rotterdam to take on board hundreds of passengers from the Zaandam at sea who were not displaying any symptoms of ill-health.

This meant there was more space on the Zaandam for staff to deal with those who were ill and to keep isolated those who remained healthy.

“As of 30 March, 76 guests and 117 crew on Zaandam have influenza-like illness, including eight people who have tested positive for COVID-19,” Mr Ashford said.

“We have seen a notable and steady decline in cases of the last 48 hours, which shows the immediate actions we took have helped contain spread.”

After several days in limbo off the Pacific coast of Panama, the two ships were finally allowed to travel through the Panama Canal on Sunday towards Fort Lauderdale, their desired destination.

Complicating the picture, Florida’s governor, Ron DeSantis, on Monday expressed his unhappiness at the prospect of such an arrival.

“We view this as a big, big problem and we do not want to see people dumped in southern Florida right now,” he told Fox News. “I’m in contact with the White House on this.”

Holland America Line’s president said: “We need confirmation from a port that is willing to extend the same compassion and grace that Panama did, and allow us to come in so our guests can go straight to the airport for flights home.”

He added: “It’s tempting to speculate about the illnesses that may have been avoided or lives saved if we’d gotten the assistance we sought weeks ago.”