President Trump extended social distancing guidelines to April 30 as cases in the U.S. topped 140,000. The doctors advising him said without any restrictions on movement that more than 1 million Americans could die.

Seattle, once home to the largest outbreak in the United States, has seen a decline in transmissions after imposing strict containment strategies.

200,000 Americans could die even if the U.S. takes aggressive action, Fauci says. 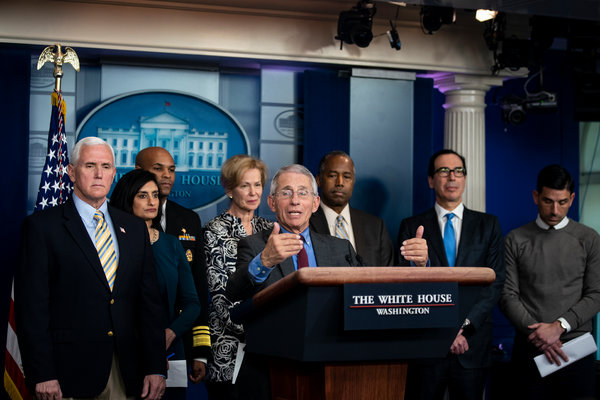 Two of the top doctors advising President Trump on the coronavirus pandemic warned on Sunday that as many as 200,000 Americans could die during the outbreak, even with much of the country already under stay-at-home orders and practicing social distancing.

Dr. Anthony S. Fauci, director of the National Institute of Allergy and Infectious Diseases and the nation’s leading infectious disease expert, said during a White House briefing that the grim projection was based on scientific modeling, and the forecasts had convinced Mr. Trump to extend social distancing guidelines through the end of April.

“I think it’s entirely conceivable that if we do not mitigate to the extent that we’re trying to do that you could reach that number,” Dr. Fauci said.

Dr. Deborah L. Birx, the lead coordinator of the White House’s coronavirus task force, said that even with precautions and restrictions the government’s model estimated “between 80,000 and 160,000, maybe even potentially 200,000 people succumbing” to Covid-19, the disease caused by the coronavirus.

She added that without any precautionary measures, the same models projected that 1.6 million to 2.2 million American

s could die from complications of the virus.

“Some of them predicted half of the United States would get infected,” she said.

Dr. Birx said it was a huge sacrifice for Americans being asked to stay home another month.

“They have to know that we really built this on scientific evidence and the potential to save hundreds of thousands of American lives,” she said.

Trump extends the federal government’s social-distancing guidelines through the end of April.

President Trump said Sunday that the federal government’s guidelines for social distancing would last until April 30, backing down from his previous comments that he hoped the country could go back to work by Easter.

He had clashed with public health experts around the country when he suggested that the guidelines — which urge people to stay at home and not to gather in groups of more than 10 — might be relaxed by April 12. His announcement on Sunday indicated that he had backed down from that suggestion.

The number of coronavirus cases in the United State exceeded 140,000 on Sunday, and at least 2,469 people have died. In New York, the epicenter of the pandemic in the United States, the death toll passed 1,000. New York City Mayor Bill de Blasio warned that the city had only one week’s worth of medical supplies left.

A commercial aircraft carrying gloves, masks, gowns and other medical supplies from Shanghai touched down at Kennedy International Airport in New York on Sunday, the first of 22 scheduled flights that White House officials say will funnel much-needed goods to the United States by early April.

The plane carried 130,000 N95 masks, nearly 1.8 million surgical masks and gowns, 10 million gloves and more than 70,000 thermometers, said Lizzie Litzow, a spokeswoman for the Federal Emergency Management Agency. FEMA will provide the majority of the supplies to New York, New Jersey and Connecticut, with the rest going to nursing homes in the area and other high-risk areas across the country, a White House spokesman said.

While the supplies will be welcomed by hospitals and health care workers — some of whom have resorted to rationing protective gear or using homemade supplies — they represent just a tiny portion of what American hospitals need. The Department of Health and Human Services has estimated that the United States will require 3.5 billion masks in the event of a pandemic lasting a year.

The pandemic has started a race among foreign governments, American governors and mayors, good Samaritans and opportunists to acquire protective gear, ventilators and other goods from China, the source of more than one-third of medical supplies in the United States in 2019. While China’s own coronavirus epidemic has subsided since February, newly built factory lines in the country are beginning to churn out masks, gowns and gloves.

The flights are the product of a public-private partnership — led by Jared Kushner, Mr. Trump’s son-in-law and a White House senior adviser — in which the administration is looking to health care distributors like McKesson Corporation, Cardinal, Owens & Minor, Medline, and Henry Schein.

With pleas from state and city leaders for more medical supplies, and questions raised about his interactions with some of them, Mr. Trump on Sunday acknowledged that he would delegate calls to governors — typically Democrats — that he has had personal disagreements with, doubling down on his assertion that the governors need to treat him “fairly.” 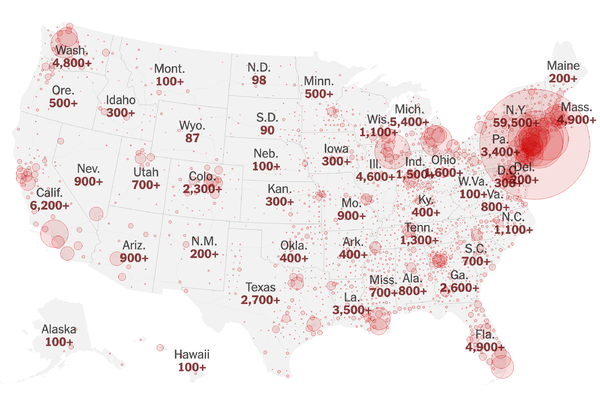 Coronavirus in the U.S.: Latest Map and Case Count

A detailed county map shows the extent of the coronavirus outbreak, with tables of the number of cases by state and county.

A coronavirus slowdown in Seattle suggests that restrictions are working.

The Seattle area, home of the first known coronavirus case in the United States and the place where the virus claimed 37 of its first 50 victims, is now seeing evidence that harsh containment strategies, imposed in the earliest days of the outbreak, are beginning to pay off — at least for now.

Deaths are not rising as fast as they are in other states. Significant declines in street traffic show that people are staying home. Hospitals have so far not been overwhelmed. And preliminary statistical models provided to public officials in Washington State suggest that the spread of the virus has slowed in the Seattle area in recent days.

While each infected person was spreading the virus to an average of 2.7 other people earlier in March, that number appears to have dropped, with one projection suggesting that it was now down to 1.4.

The researchers who are preparing the latest projections, led by the Institute for Disease Modeling, a private research group in Bellevue, Wash., have been watching a variety of data points since the onset of the outbreak. They include tens of thousands of coronavirus test results, deaths and mobility information to estimate the rate at which coronavirus patients are spreading the disease to others.

The progress is precarious, and the data, which was still being analyzed and has yet to be published, is uncertain. But the findings offer a measure of hope that the emergency measures that have disrupted life in much of the nation can be effective in slowing the spread of the disease.

“We made a huge impact — we slowed the transmission,” Seattle’s mayor, Jenny Durkan, said in an interview. She cautioned that any lifting of restrictions would bring a quick rise in new cases, and that she expected distancing requirements to continue in some form for months.

“There is evidence that doing the aggressive measures can have a benefit,” Gov. Jay Inslee said in an interview, discussing the overall numbers he is seeing.

But the governor said that the state was far from turning a corner. While there are indications of improvement, he said, he has also seen numbers in the last few days that still have him worried, including a rise in positive test results statewide and new cases in rural areas.

Two of the nation’s largest health insurers, Cigna and Humana, agreed to protect their customers from out-of-pocket costs if they need treatment for Covid-19, a decision that represents a rapid change in how companies are responding to the pandemic.

Describing the insurers’ decision as “a big deal,” President Trump on Sunday said the companies don’t “waive co-pays too easily, but we asked them and they did it.”

While insurers and government officials have taken steps in recent weeks to limit people’s out-of-pocket costs when they get tested, the bills associated with treatment for Covid-19 can run in the tens of thousands of dollars for a single hospital stay.

“Let’s take the economic burden and the economic uncertainty off the table,” said David M. Cordani, the chief executive of Cigna, in an interview before the White House briefing.

Under the new policy, customers “don’t have to worry about the financial burden of the virus while their lives are being turned upside down,” said Bruce Broussard, the chief executive of Humana.

Employers that self-insure provide coverage to the majority of workers in this country, and they would not be affected by the insurers’ decision. They would have to decide individually whether they would take similar action. “It is going to be a client-by-client decision,” Mr. Cordani said.

Whether individuals will be completely free of any surprise medical bills is also unclear, given the frequent disputes that normally arise between insurers and hospitals and doctors. People who get care from doctors outside their plan’s network could also still potentially face unpaid bills.

Neither Cigna nor Humana said it had calculated the expected cost of the virus over the coming year, but one recent analysis said insurers, employers and individuals could face tens of billions of dollars in additional costs. 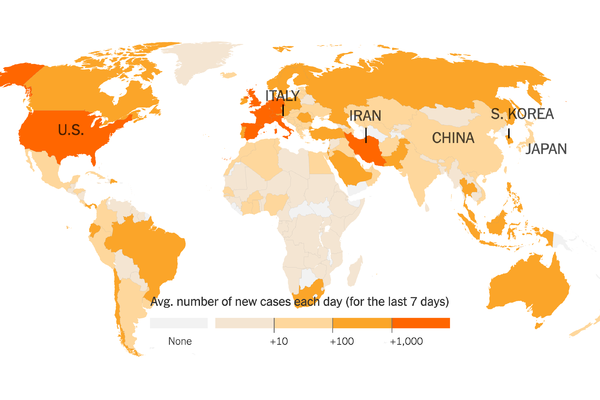 As the coronavirus pandemic has sickened more than 700,000 people worldwide and killed over 30,000, the Syrian government reported the first death from the virus in its territory on Sunday, about a week after announcing its first confirmed case. The outbreak, if uncontrolled, could shred a health care system already enfeebled by more than nine years of civil war.

After the virus had struck neighboring countries, the Syrian government did not acknowledge any confirmed cases for weeks, even as rumors spread of hospitalizations and deaths from pneumonia-like diseases. But Syria has now confirmed 10 cases, including the patient who died on Sunday, according to a state news agency.

The government had already moved to fend off an outbreak before announcing its first case. It closed schools and universities, limited working hours, banned gatherings, postponed parliamentary elections and built quarantine centers. Syrians are now subject to a nightly curfew between 6 p.m. and 6 a.m.

But Syrians and recent visitors to the country said in interviews that daily life appeared to continue much as usual. Marketplaces and streets were crowded; few wore masks or gloves.

The health care system would be rapidly overwhelmed in a full-blown outbreak, aid workers say. Many doctors and nurses have fled the country, and hospitals were bombed and never rebuilt, leaving large swaths of the population with limited access to medical care. U.S. and European sanctions make it difficult to import supplies.

The W.H.O. has delivered testing kits and protective equipment for health care workers, but medical aid groups that operate in the country have found their efforts to prepare hampered by the new restrictions on working hours and on gathering.

“Basic services have been all but decimated,” said Rachel Sider, a Syrian policy adviser at the Norwegian Refugee Council. “It’s impossible to imagine how this country can cope with an outbreak.”