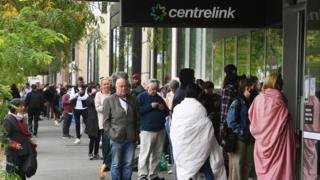 For many in Australia, the bushfire catastrophe now seems a distant memory as the coronavirus pandemic takes this country deeper into the unknown.

The “miracle economy” that avoided recession during the 2007-2008 financial crisis, avoided the worst of the 1997 Asian financial crisis as well as the lancing of the dot.com bubble is in deep trouble.

The Black Summer fires were adding to an escalating economic malaise but the coronavirus has inflicted a jolting collapse. In one week about one million Australians became unemployed.

Within days the centre-right government had unveiled Australia’s biggest ever economic package – A$130bn ($80bn) is to be spent on keeping six million people, or around half the workforce, in jobs. 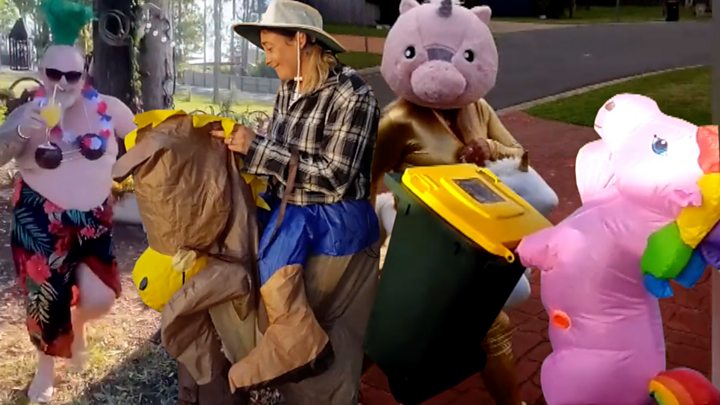 So far, direct government aid to businesses in response to the virus is approaching A$200bn, or about 10% of the nation’s income, or GDP. This has never happened before.

Tim Harcourt, from the University of New South Wales Business School, says the JobKeeper allowance is a throwback to more collaborative times.

“The wage subsidy idea is Australian in the sense that we’ve got this tradition of the trade unions and the employers working cooperatively with the government. They’ve been working on this almost as a tripartite approach, which brings us back to the Australia of the ‘1980s and ‘1990s,” he told the BBC.

The conservative government is abandoning its economic dogma. Its past preoccupations with budget surpluses are rusted or no more.

“It is probably an approach where Australia has dropped its ideology and sought to do whatever it takes to get Australia through the pandemic,” added Tim Harcourt.

Australia will soon head into winter. The government’s mega job saving scheme is an attempt to put the economy into hibernation. It sleeps while the country battles the Covid-19 health crisis and, when the fight is eventually over, companies and their staff can, in theory, spring back into action.

“This is similar to the scheme announced in the UK, and is supposed to keep the lines of communication between employers and employees open, allowing for a relatively rapid restoration of activity if and when normal service resumes. This takes some pressure off the welfare system,” explained Dr Andrew Grant from the University of Sydney’s Discipline of Finance.

In recent times large-scale unemployment has not been an Australian affliction, but it is now.

There have been long queues outside the government’s welfare agency, Centrelink. In the Sydney suburb of Brookvale, they have stretched around the block.

“This is my very first visit to a Centrelink office. It is horrible,” said Chris Dawson. “I am almost 60 and I have never been unemployed in my life.”

“I am devastated. We have four adults in our family and three of us are unemployed as of this week,” she added.

Few sectors will be spared, but the fortunate few will flourish. Supermarkets are recruiting thousands of staff to cope with demand, and alcohol sales are up. A friend wryly observed that “the curve of daytime drinking seems to be rising exponentially”!

It’s almost certain that the economy once dubbed the “wonder down under” is rapidly slipping into reverse.

“It is the recession we have deliberately created due to the measures we’ve had to take to flatten the curve, which makes it very different to past recessions that were unexpected and policy-makers were quite shocked at the depth and length of them,” explained Tim Harcourt.

The UK, Germany and the US are bigger, wealthier countries and are spending more to prop up their economies, but Australia’s Covid-19 rescue packages are its greatest ever financial gamble. Dr Andrew Grant predicts the post-virus recovery could take up 18 months, but the truth is no-one knows.

Australia could suffer more than others because of the unfolding of two of its key exports: tourism and education.

“It’s the end of globalisation as we know it,” said Tim Harcourt. “All major economies have been hit almost at once by impact of the coronavirus and it’s done damage to global supply chains in manufacturing and even more to people- based industries like education and tourism.”

For now, this nation of 25.6 million people is primed for a war with an enemy that can’t be seen or tamed, yet.

“For many young and old, 2020 will be the toughest year of our lives,” warned Prime Minister Scott Morrison.