Millions of South Koreans are heading to polling stations as the country holds parliamentary elections despite the global coronavirus pandemic.

South Korea‘s mass testing, tracing and quarantine measures meant authorities believed it was safe for the ballot to go ahead. About 44 million people are eligible to vote.

The country has recorded 10,591 COVID-19 cases and only 225 deaths, according to Johns Hopkins University, which is tracking the outbreak.

Voters have been required to observe various protective measures.

They must wear face masks and have their temperatures checked, disinfect their hands and put on gloves to enter the booth. People are also required to keep one metre apart.

The government also allowed 50,000 people who are self-isolating to vote: provided they have no symptoms, they will be allowed to cast ballots once voting ends at 6pm.

“We believe that personal hygiene and keeping personal distance and hand washing and sanitising the poll places frequently is very effective – the only effective way to control the person-to-person transmission particularly in closed, small areas,” Professor Jeon Jae-hyun, a specialist in infectious disease at Ehwa University Hospital, told Sky News. 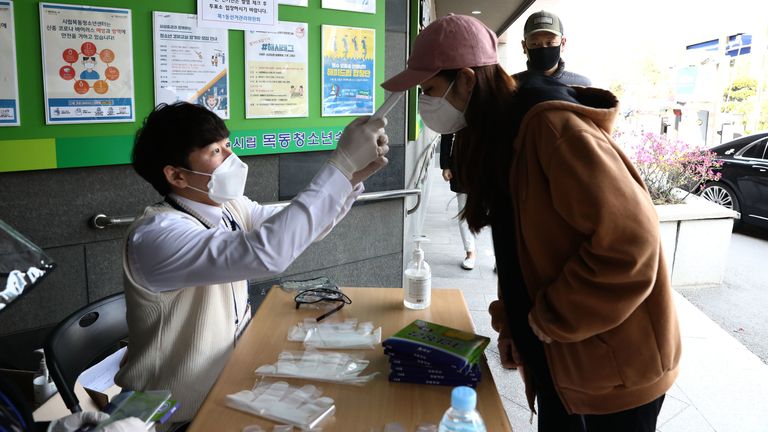 South Korea has so far avoided the sort of lockdown currently in effect in the UK.

“Korean strategies are established based on the purpose of slowing down and delaying the peak incidence to avoid social and medical collapse,” Prof Jeon said. 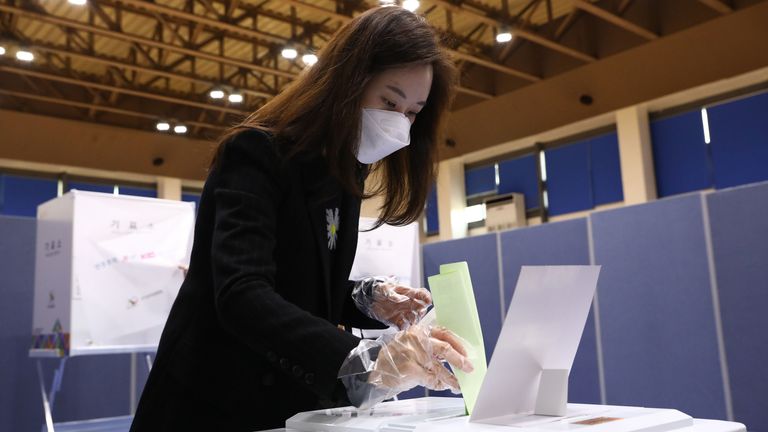 There are three main strategies, composed of searching and destroy, reverse isolation of vulnerable people and influx control.

“I can say that we are in the right direction based on the current Korean situation, although there were some unexpected outbreaks by careless citizen groups. That is three main factors we could succeed to get through this situation so far,” the professor said.

The elections, which are held every four years, decide the make-up of South Korea’s National Assembly, where the Democratic Party (DP) currently has a majority.

The liberal DP had been losing ground to the conservative opposition, the United Future Party, but South Korea’s robust response to the coronavirus pandemic has led to a surge in approval for the DP.

The government is led by President Moon Jae-in, whose five-year term as president ends in 2022.