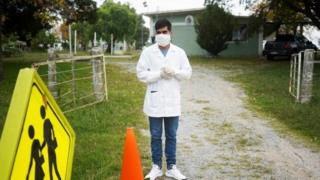 Hundreds of primary schools in rural areas of Uruguay have reopened amid the coronavirus pandemic.

Attendance will not be compulsory to allow parents to decide whether to send their children back into the classroom.

Schools which have reopened had to be disinfected and will comply with restrictions imposed to curb the spread of the virus.

Uruguay has had 549 confirmed cases of coronavirus and 12 people have died, according to Johns Hopkins University.

Between 5,000 and 6,000 children are expected to return to class but in some schools only a handful of pupils arrived for their first day back on Wednesday.

At one rural school northwest of the capital, Montevideo, only five of the 16 enrolled students returned, Reuters reports.

For the time being, the schools will open three days a week for a maximum of four hours a day.

The schools in rural areas were chosen to reopen first as they have a very small number of students and the risk of having large groups of children gathering was therefore minimal.

While some groups representing teachers have opposed the reopening of the schools, the government argued that pupils in rural areas were most at risk of losing out on education because they were less likely to have computers and good internet connections.