COVID-19: Austria to place millions of unvaccinated people into lockdown in days as coronavirus cases surge

Austria is just “days” away from placing millions of people who are not fully-vaccinated against coronavirus into lockdown, as daily infections are at a record high, the country’s chancellor has said.

Around 65% of Austria’s population is fully vaccinated against COVID-19, national statistics show.

However, according to data from the European Centre for Disease Prevention and Control, the country has the lowest vaccination rate of any western European country, apart from Liechtenstein – that has a population of around 40,000.

Many Austrians are sceptical about vaccinations, a view encouraged by the far-right Freedom Party, the third-biggest in parliament.

Under an incremental government plan agreed in September, once 30% of intensive-care beds are occupied by COVID-19 patients, people not vaccinated against the coronavirus will be placed under lockdown rules, with restrictions on their daily freedoms.

The current level is 20% and it is rising fast. 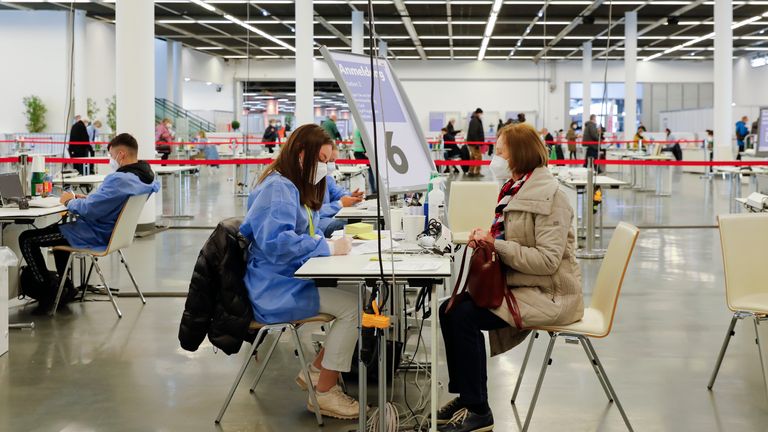 On Thursday, official figures showed 760.6 reported new cases per 100,000 residents over the previous seven days – a rate three times that of neighbouring Germany, where record numbers are also causing alarm.

“According to the incremental plan we actually have just days until we have to introduce the lockdown for unvaccinated people,” Chancellor Alexander Schallenberg told a news conference, adding that Austria’s vaccination rate is “shamefully low”.

“A lockdown for the unvaccinated means one cannot leave one’s home unless one is going to work, shopping (for essentials), stretching one’s legs – namely exactly what we all had to suffer through in 2020,” Mr Schallenberg said, referring to three national lockdowns last year.

Austria has taken a series of measures to curb the spread of COVID-19 and encourage more people to get vaccinated in recent weeks.

During a visit on Thursday to Bregenz in western Austria, Mr Schallenberg said that a lockdown for the unvaccinated is “probably unavoidable” and that the unvaccinated face an “uncomfortable” winter and Christmas, the Austria Press Agency reported.

“I don’t see why two-thirds should lose their freedom because one-third is dithering,” Schallenberg said. “For me, it is clear that there should be no lockdown for the vaccinated out of solidarity for the unvaccinated.”

Upper Austria province, which has the lowest vaccination rate and the highest infection rate of Austria’s nine provinces, said it plans to take the lead on placing the unvaccinated into lockdown by introducing the measure on Monday.

The surge in cases in Austria comes at a time when Eastern European states, with the continent’s lowest vaccination rates, are experiencing some of the world’s highest daily death tolls per capita.

Dutch experts on Thursday recommended a two-week partial lockdown, which would be western Europe’s first since vaccines were widely deployed, while other countries are requiring vaccination certificates to enter public spaces.