Home » World News » COVID-19: WHO boss calls for 'honest' leadership from US, China

COVID-19: WHO boss calls for 'honest' leadership from US, China

Tedros urges US, China to unite in fight against coronavirus pandemic after Trump threatened to review US funding. 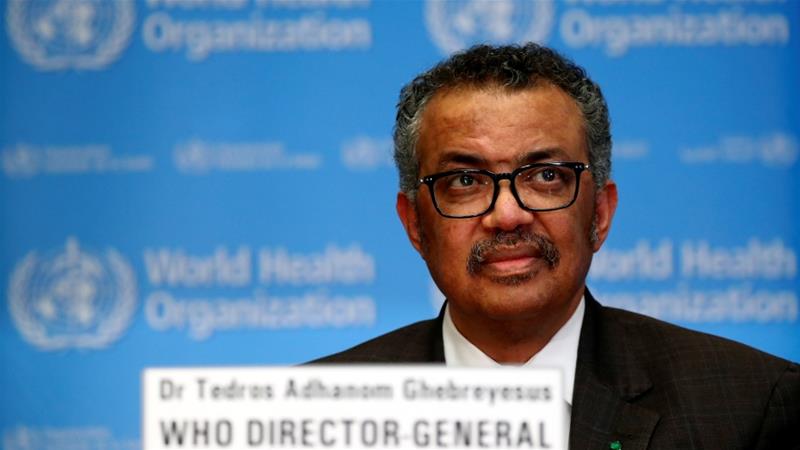 The head of the World Health Organization defended his agency’s handling of the coronavirus pandemic, calling on leaders to not “politicise” the situation and focus on saving lives threatened by COVID-19.

The comments by Tedros Adhanom Ghebreyesus on Wednesday came a day after US President Donald Trump’s criticised the global health agency and suggested his administration could review funding.

With the global death toll exceeding 83,000 amid 1.4 million confirmed infections, Tedros said now is not the time for such threats.

“The focus of all political parties should be to save their people. Please don’t politicise this virus. It exploits the differences you have at the national level,” he said at a press briefing in Geneva, addressing politicians and world leaders.

Pleading for leaders to put aside differences, Tedros added: “Please, unity at national level, no using COVID for political points. Second, honest solidarity at the global level. And honest leadership from the US and China,” he said.

“The United States and China should come together and fight this dangerous enemy,” he said.

Trump on Tuesday had said the WHO was “very China-centric” in its approach, suggesting the UN agency had gone along with Beijing’s efforts months ago to minimise the severity of the outbreak.

At a news conference on Tuesday, Trump said his country was “going to put a hold on money spent to the WHO,” however, he appeared to backtrack later when in response to questions he said: “We’re going to look at it.”

It was not immediately clear how Trump could “block” funding for the agency. Under US law, Congress, not the president, decides how federal funds are spent.

The United States is the top donor to the Geneva-based body. US contributions to WHO in 2019 exceeded $400m, almost double the second-largest member-state contribution.

“We are still in the acute phase of a pandemic, so now is not the time to cut back on funding,” Hans Kluge, WHO regional director for Europe, told a virtual briefing when asked about Trump’s remarks.

David Heymann, a professor at the London School of Hygiene & Tropical Medicine who led the WHO’s response to the 2003 SARS outbreak, said that any US funding cut would be a huge blow.

“If the WHO loses its funding, it cannot continue to do its work. It works on a shoe-string budget already,” Heymann said in London. “Of course, it would be disastrous for the WHO to lose funding.”

Meanwhile, Bruce Aylward, senior adviser to Tedros, also defended the WHO’s relationship with China, saying its work with Beijing was important to understand the outbreak which was detected in Wuhan in December.

“It was absolutely critical in the early part of this outbreak to have full access to everything possible, to get on the ground and work with the Chinese to understand this,” he told reporters.

“This is what we did with every other hard-hit country like Spain and had nothing to do with China, specifically.”

Aylward, who led a WHO expert mission to China in February, defended the agency’s recommendations to keep borders open, saying that China had worked “very hard” to identify and detect early cases and their contacts and ensure they did not travel.

“China worked very, hard very early on, once it understood what it was dealing with, to try and identify and detect all potential cases to make sure that they got tested to trace all the close contacts and make sure they were quarantined, so they actually knew where the virus was, where the risk was,” he said.

“Then, they made it very clear that these people would not and could not travel within the country, let alone internationally.”