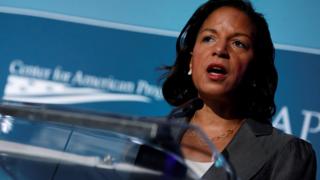 A former Obama White House official, Susan Rice, is a top contender to be Joe Biden’s running mate. Even if she is not chosen as the vice-presidential nominee, she is likely to be a key player if he wins. So who is she?

Today Ms Rice, the 55-year-old former national security adviser, is hoping for a return to power. She is on the short list of candidates to become the Democratic vice-presidential nominee. If she is not chosen as vice-president and Mr Biden wins the election, she could potentially become secretary of state.

Ms Rice’s name is being floated as Mr Biden is under increasing pressure to select not just a woman – which he has committed to do – but a black woman as a running mate.

Ms Rice’s biography makes her seem like a natural choice for a top slot. But she has never run for office, and some analysts question whether she is the best candidate for the ticket. They say she does not have the political chops needed to win a close election. They also wonder about the baggage that she would bring to the race for the White House.

While working for Mr Obama, Ms Rice became a lightning rod for controversy.

After US outposts in Benghazi, Libya, were attacked in September 2012, Ms Rice spoke about the melee on television, describing the attacks as “spontaneous violence” rather than as assaults that had been organised by militant groups.

Ambassador J Christopher Stevens and three other US citizens were killed in those attacks.

Republicans lashed out at her, criticising her televised remarks, and said that she had misled the public about the nature of the assaults.

Ms Rice said that she had been providing the public with the information that was available to her and other White House officials at the time.

Nearly a decade later, the controversy still haunts her. It could remain as a liability for Democrats during the campaign.

A target for conservatives

Michael S Smith II, a terrorism analyst who is a Johns Hopkins University lecturer, says that conservatives would remind people of Ms Rice’s remarks about Benghazi. These conservatives, he says, would use her remarks to show that, in their view, Democrats are dishonest about the threat posed by terrorist groups and that progressives are weak on national security.

Says Mr Smith: “She was the poster child for conservatives who said that Obama was lying to the public about threats posed by al-Qaeda” and other groups that have carried out attacks.

Yet many Democrats believe that she is the right person for the job of vice-president and that she would add lustre to the ticket. She worked with Mr Biden and other White House officials on the Iran nuclear deal of 2015, and she helped with the US efforts on the Paris climate agreement.

Under Mr Trump’s leadership, the US has pulled back from international agreements.

David Litt, a former speechwriter for the Obama White House and the author of Democracy in One Book or Less, says that the US lost its standing on the global stage because of Mr Trump’s presidency.

“I can remember when our allies were upset with America, but I can’t remember a time when allies pitied America,” Mr Litt says.

Mr Litt believes that Ms Rice would be an excellent choice as a vice-president because of her experience in the global arena: she would be able to re-establish strong relationships with allies of the United States, he says, and would help “restore America’s place in the world”.

Among the dozen or so leading candidates to become Mr Biden’s running mate, Ms Rice has the strongest background in international issues. At age 32, she became an assistant secretary of state and later served as ambassador to the UN.

Since leaving the White House, she has written a memoir, Tough Love, a story that recounts her Washington childhood and her life with her husband, Ian Cameron, a television producer who was born in Canada, and two children. She also describes her family history: Her great-great grandfather was born a slave, and part of her family was originally from Jamaica.

In her memoir, she said that she had little interest in electoral politics for herself, explaining she “didn’t have the patience or obsequiousness to run for office and was not keen on compromising my principles”.

Recently, though, she has come around to the idea. During an interview on CBS This Morning, she said that she would bring decades of experience in the executive branch to the job of vice-president. She helped fight Ebola and other pandemics during her time at the White House, she explained, and said that she knows what diseases can do to individuals and society.

She described the economic impact of the current pandemic “I understand deeply the economic repercussions for Americans who are suffering,” she said, adding that she understands how the “suffering has disproportionately affected communities of colour”.

She said her lack of experience as a candidate matters less today since campaigning is done “remotely”.

Still it is a tall order: running for office is more personal – and in some ways more difficult – than serving in office, say those who have done both.

A former assistant secretary of state for human rights, Tom Malinowski made the transition to street-level politics himself. He is now a Democratic congressman from New Jersey. He met Ms Rice when they were both Rhodes scholars at Oxford and says that she has what it takes to win: “She has extraordinary poise and self-confidence and intelligence that comes across in a genuine way.”

Mr Biden is expected to make his announcement about a vice-presidential candidate in the coming days. Ms Rice has the courage of her convictions. But the question remains: will she convince others that she is the right person for the ticket?

Related News:
Business News:
Taboola, Purveyor of Clickbait Ads, Will Go Public
Europe’s Bankruptcies Are Plummeting. That May Be a Problem.
What the SPAC? Media’s New Favorite Funding
Stock market news live updates: Stock futures drift after indexes touch fresh record highs
Air New Zealand’s first quarantine-free flight in months lands to emotional welcome
Recent Posts
This website uses cookies to improve your user experience and to provide you with advertisements that are relevant to your interests. By continuing to browse the site you are agreeing to our use of cookies.Ok