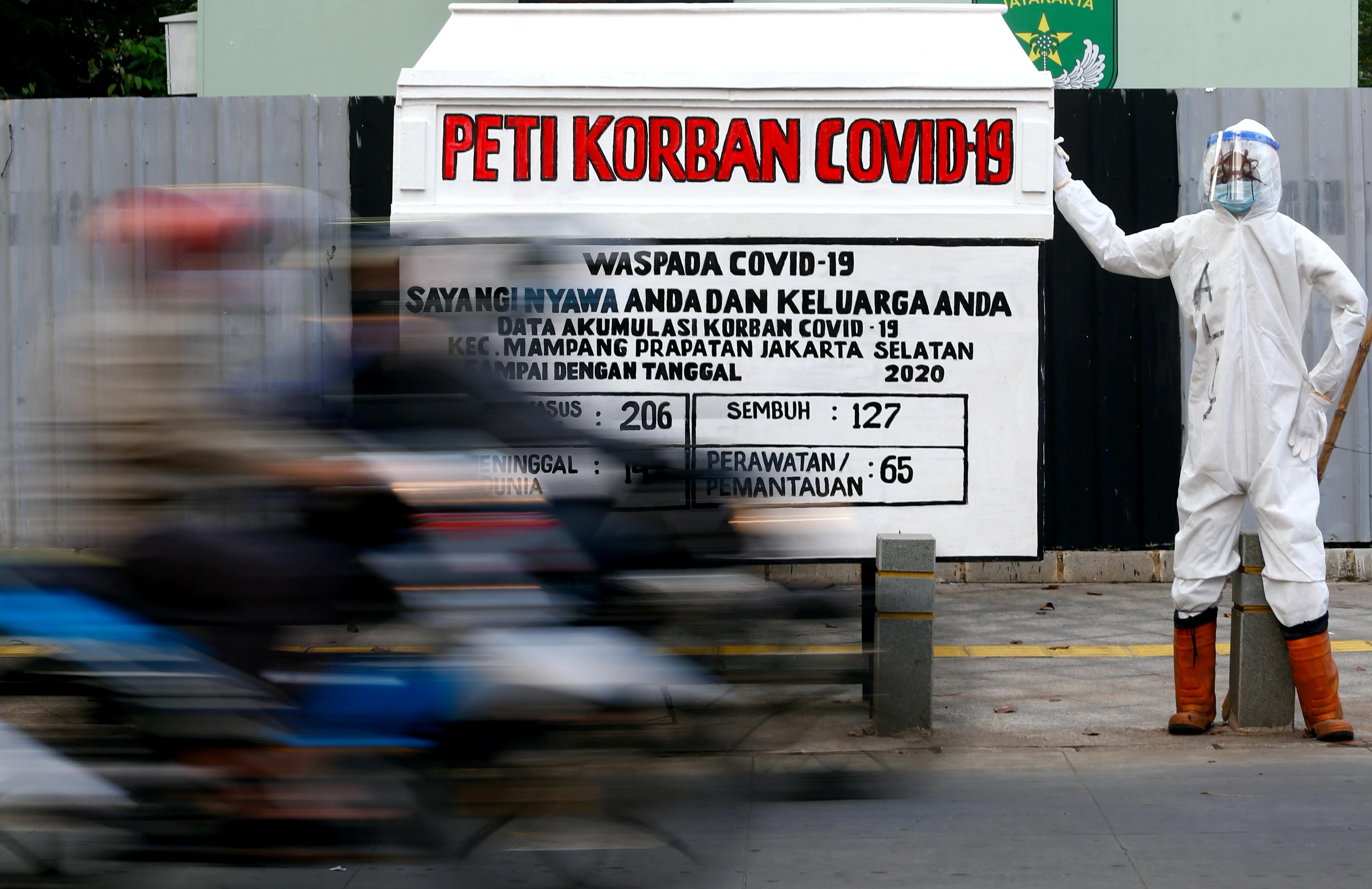 His suggestion was the latest in a string of unorthodox treatments put forward by the president’s cabinet over the past six months, ranging from prayer to rice wrapped in banana-leaf to eucalyptus necklaces.

The remedies reflect the unscientific approach to battling the coronavirus in the world’s fourth-most populous country, where the rate of testing is among the world’s lowest, contact tracing is minimal, and authorities have resisted lockdowns even as infections spiked.

Indonesia has officially reported 6,346 deaths from COVID-19, the disease caused by the new coronavirus, the highest overall toll in Southeast Asia. Including people who died with acute COVID-19 symptoms but were not tested, the death toll is three times higher.

Indonesia shows no signs of containing the virus. It now has the fastest infection spread in East Asia, with 17% of people tested turning out positive, rising close to 25% outside the capital, Jakarta. Figures above 5% mean an outbreak is not under control, according to the World Health Organization.

“This virus has already spread all over Indonesia. What we are doing is basically herd immunity,” said Prijo Sidipratomo, dean of the Faculty of Medicine at the National Veterans Development University in Jakarta. “So, we should just dig many, many graves.” Herd immunity describes a scenario where a large proportion of the population contracts the virus and then widespread immunity stops the disease from spreading.

Government spokesman Wiku Adisasmito did not respond to detailed questions from Reuters. He said the number of infections was “a warning for Indonesia to continuously improve its handling effort,” and that positive cases per capita in Indonesia were lower than most countries. President Joko Widodo’s office did not respond to questions sent by Reuters.

Statistics from Our World in Data, a nonprofit research project based at the University of Oxford, show Indonesia ranked 83rd out of 86 countries surveyed for overall tests per capita.

“Our concern is that we have not reached the peak yet, that the peak may come around October and may not finish this year,” said Iwan Ariawan, an epidemiologist from the University of Indonesia. “Right now we can’t say it is under control.”

At the outset of the pandemic, Indonesia’s government was slow to respond and reluctant to reveal what it knew to the public, according to more than 20 government officials, test laboratory managers and public health experts who spoke to Reuters.

Despite surging cases in neighbouring countries and having 3,000 polymerase chain reaction (PCR) test kits – the WHO-approved test for detecting the coronavirus – ready by early February, the government said fewer than 160 tests were conducted by March 2.

On March 13, Widodo said the government was withholding information so as not to “stir panic.” During the first two weeks of March, the government concealed at least half of the daily infections it was aware of, two people with access to the data told Reuters. The two people said they were later restricted from seeing the raw data.

A call in March by Widodo for a massive expansion of rapid diagnostic testing may have undermined the country’s testing regime, according to Alvin Lie, a commissioner in the office of the Indonesian Ombudsman, an official government watchdog.

Scientific studies have shown rapid tests, which test blood samples for antibodies, were found to be far less accurate than the PCR method, which tests swabs from the nose or throat for genetic material. Widodo’s push to use a less reliable test diverted resources away from PCR tests, three lab managers told Reuters.

Lie told Reuters that importers of the rapid tests, including large state-owned enterprises and private companies, made “huge profits” by charging consumers up to 1 million rupiah ($68), even though each test costs only 50,000 rupiah ($3.50).

But the tests continued to be widely used and it took until July for imports of rapid tests to be halted and for the government to introduce a price cap of 150,000 rupiah ($10). In July, Indonesia also formally advised provincial governments and others not to use rapid testing for diagnostic purposes in their updated guidelines for COVID-19 prevention and control.

But Lie said there is a huge stockpile and rapid tests are still being broadly deployed, including for screening office workers and travellers to allow them to move freely for 14 days.

Adisasmito declined to comment on whether the president’s call for rapid testing undermined its overall testing efforts. He did acknowledge the inaccuracies of rapid testing but said it was still useful in some situations where the capacity to use PCR tests is limited, including screening travellers. He did not directly answer questions about companies making large profits from tests.

The central government does not disclose the level of national rapid testing. But data from West Java, Indonesia’s largest province with 50 million people, shows that it has conducted 50% more rapid tests than PCR tests.

Government officials say 269 labs with PCR machines are now operating. However, the labs are increasingly unable to meet demand as infections rise. The number of suspected cases – those with COVID-19 symptoms who have not been tested – has doubled to 79,000 in the past month, according to government data.

Part of the problem is that lab capacity is far from being fully utilised, according to four health officials. One senior health ministry official, Achmad Yurianto, told Reuters Indonesia was able to test 30,000 people per day, more than twice the daily average of 12,650 people tested over the past month.

Five lab managers and consultants contacted by Reuters said the failure to use the country’s testing capacity was due to government mismanagement that had led to shortages of staff and reagents, chemicals needed for the tests.

Adisasmito did not respond to questions about the government’s management of testing. Last week, explaining the shortfall in testing, Yurianto said labs did not have enough time to check all specimens, with some labs working limited days and hours.

Widespread PCR testing and quick results are essential for tracing the contacts of those infected by the coronavirus. According to national guidelines released by Indonesia’s health ministry on July 13, contact tracing is “the main key in breaking the COVID-19 transmission chain.”

Reuters spoke to 12 health workers across Indonesia who described the country’s contact tracing effort as bungled and ineffective.

Rahmat Januar Nor, a health official in the delta city of Banjarmasin in Indonesian Borneo, said information about new coronavirus cases often came into his office in varying states of disorder, with incomplete names, inactive phone numbers or outdated addresses for patients and their contacts, problems seen by healthcare workers across the country.

“We asked the village leaders for help,” Nor told Reuters. “But in the end we didn’t find them (the contacts) most of the time.”

When they did reach contacts, many refused to be tested, fearful they would lose their jobs or be ostracised in the community, Nor and other health officials said.

Unpublished data from the government COVID-19 task force, reviewed by Reuters, shows only 53.7% of people identified as confirmed or suspected carriers of the disease were subjected to contact tracing by June 6.

Adisasmito did not provide more recent contract tracing data but acknowledged it “remains low” and said the government aimed to track 30 people per positive case. That is still low compared to other Asian countries. South Korea said in May it traced and tested almost 8,000 people after a man with the virus visited a nightclub.

According to five people familiar with the matter, the WHO advised Indonesian authorities that contact tracing should involve at least 20 people tracked per confirmed and suspected case. But Indonesia is only averaging about two traced contacts per case, according to provincial officials and data reviewed by Reuters.

In Jakarta, where the epidemic first took hold in the country, the data shows fewer than two contacts traced, on average, for each confirmed and suspected case in July.

In East Java, another hotspot, tracing rates are 2.8 contacts per each confirmed and suspected patient, according to researchers from Airlangga University.

A WHO spokesperson said Indonesia began following its contact tracing recommendations in mid-July.

‘ALWAYS ON THE FIRST WAVE’

Instead, it has urged Indonesians to wear masks, wash their hands and practise social distancing while working, travelling and socialising.

“The argument was that we could not (afford it),” Soewarta Kosen, a health economist who consulted the government on its coronavirus response, told Reuters. “We were afraid that there would be social unrest.”

Widodo’s emphasis on the economy is popular, polling shows. The Indonesian economy shrank only 5.3% in the second quarter of 2020, much less than many other regional economies. But epidemiologists say they fear the decision will cost Indonesia more in the long term, especially as its health system is poorly equipped to cope if positive cases continue to surge.

Dr Bambang Pujo, an avid runner and anaesthetist at the main COVID-19 referral hospital in Indonesia’s second-largest city of Surabaya, said mortality rates in his ward are between 50% and 80% and there are not enough beds.

“Ten hours inside a hazmat suit is like running a marathon twice,” he said, describing the long hours he spends in protective gear inside the intensive care unit. “Imagine how we feel. It is like playing God. We hope that we don’t make mistakes and, if we do, we are forgiven.” 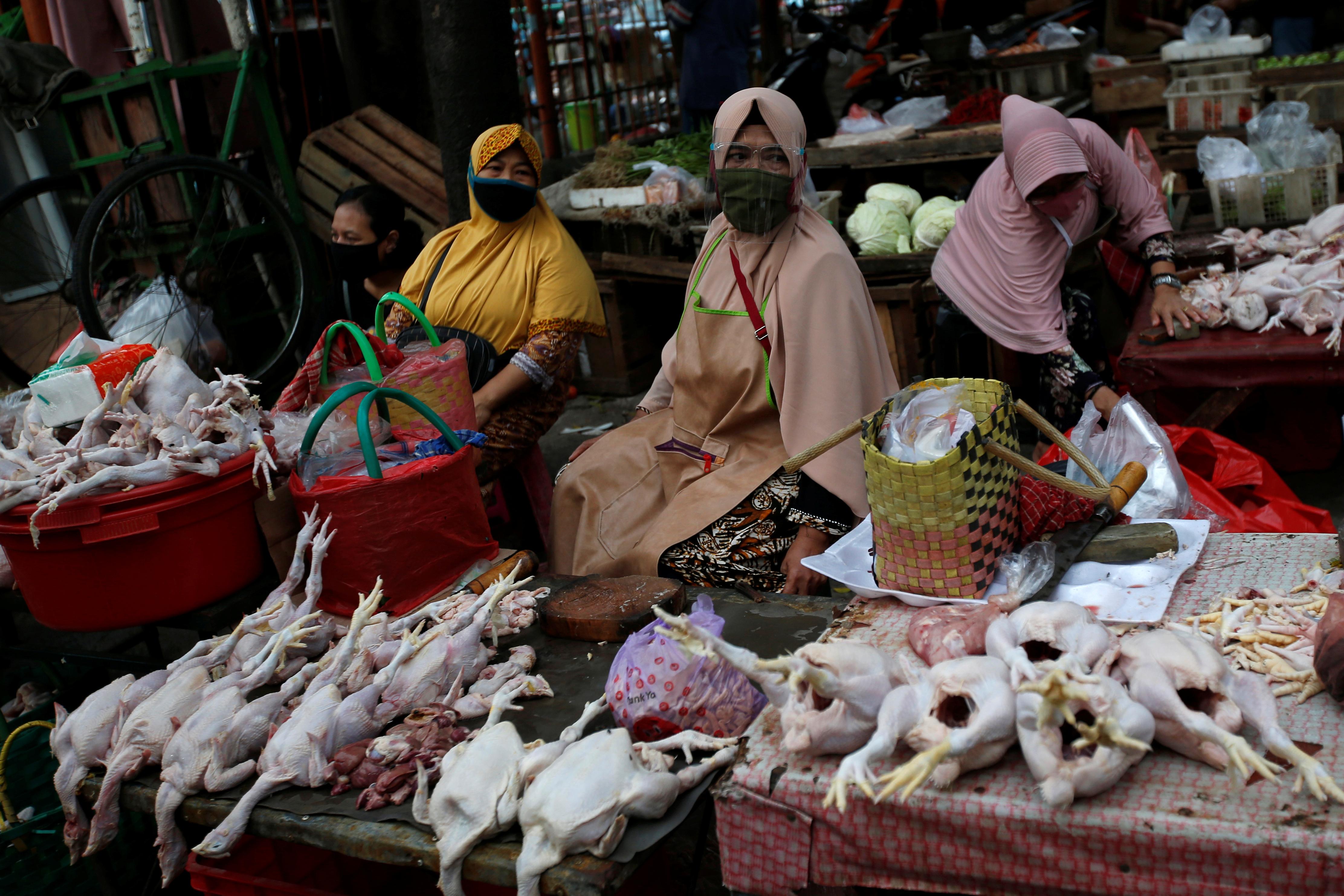 Indonesia has only 2.5 intensive care beds per 100,000 people, according to the country’s national disaster agency, which leads the COVID-19 task force. That compares to 6.9 per 100,000 people in India, according to an April report from Princeton University. Adisasmito said the health care system is being continuously improved.

“We must know that our infrastructure is not ready for a pandemic like this,” said Pujo. “Other countries have heard of second waves. We’re always on the first wave.”