The former European Commission President, who served from 2014 to 2019, said he was “appalled” by cuts to the budget for defence, research and health made by EU chiefs. He also pinned the blame on the “harmful influence” of the frugal four – Denmark, Sweden, Austria and the Netherlands.

In a strongly worded rant, Mr Juncker said he was “dismayed” by the “lack of ambition”, adding: “This is not Europe”.

The former EU boss also hit out at the European Council’s decision to reduce the proposed sum for the Erasmus programme, adding “also cut the budget for defence, research and health”.

He said: “I am appalled by these blunders caused by the harmful influence of the Frugal Four. 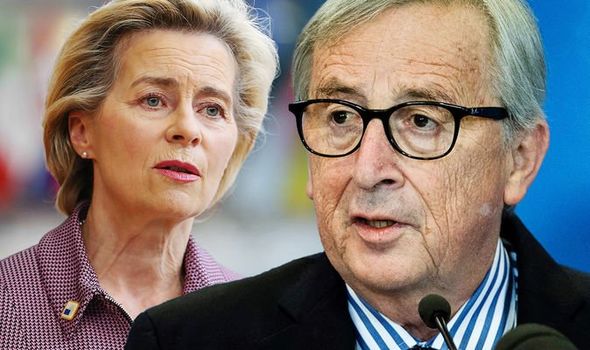 “The leaders have made savings regarding the proposals that my Commission made in areas that look to the future.

“This is not Europe. I am dismayed by this lack of ambition, which does not reflect in reality the virtuous words that governments may have.”

Taking a swipe at his predecessor Ms von der Leyen, he said the Commission was already a truly “geopolitical” one without him, despite his work to make it “political”.

Mr Juncker told the Schuman Foundation think tank: “I have always said that the Commission does what it wants, because it has a monopoly over initiative and is free to decide for itself.

“Ursula von der Leyen came up with this idea of a ‘geopolitical’ Europe.

“But to this day, I have never discovered how the new Commission could be more focused on international affairs than the one I had the honour of chairing.

“I never understood what could be the added value of a roughly defined ‘geopolitical’ Europe.”

European leaders have been at odds over the details of a multi-year grant and loan scheme called Next Generation EU, raising the risk that cash would not start reaching the hardest hit nations on time.