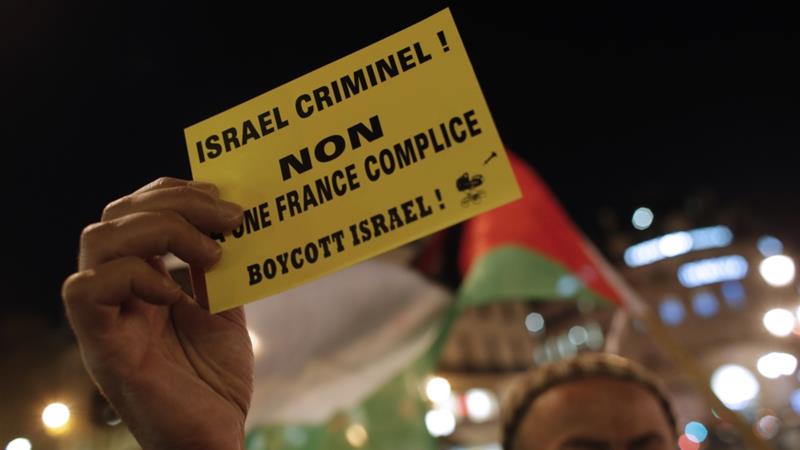 Europe’s top rights court has ruled that French judges were wrong to convict activists who staged a “boycott Israel” demonstration at a supermarket, saying the protest could not be considered an incitement to discrimination.

Eleven members of the Boycott, Divestment and Sanctions (BDS) movement in France, known as “Collectif Palestine 68”, were charged after displaying Israeli-origin products and urging clients not to buy them at a shop near Mulhouse, eastern France, on two occasions in 2009 and 2010.

The protests echoed long-standing calls by NGOs to denounce Israel’s policies, including its settlements in the illegally occupied Palestinian territories.

The Israeli government has denounced the boycott movement as an attempt to undermine its legitimacy and has banned entry to foreigners who support the calls.

Though the activists were initially cleared of charges after arguing it was a case of free speech, an appeals court overturned the ruling and found them guilty of inciting people to discriminate against products from Israel.

They were ordered to pay a joint fine of 1,000 euros ($1,135) to three civil parties, including the International League against Racism and Anti-Semitism (LICRA).

But the Strasbourg-based ECHR said the French judges should have taken into account the fact that “the applicants had not been convicted of making racist or antisemitic remarks or of inciting hatred or violence”.

Political speech is by nature controversial, the court said in its ruling, but remains a legitimate public interest, “provided that it did not cross the line and turn into a call for violence, hatred or intolerance”.

Amnesty International, which in 2018 saw one of its US employees denied access to the occupied West Bank over its support of the boycott, hailed the European court’s ruling.

“Today’s landmark decision sets a significant precedent that should stop the misuse of anti-discrimination laws to target activists campaigning against human rights violations perpetrated by Israel against Palestinians,” Marco Perolini of Amnesty France said in a statement.