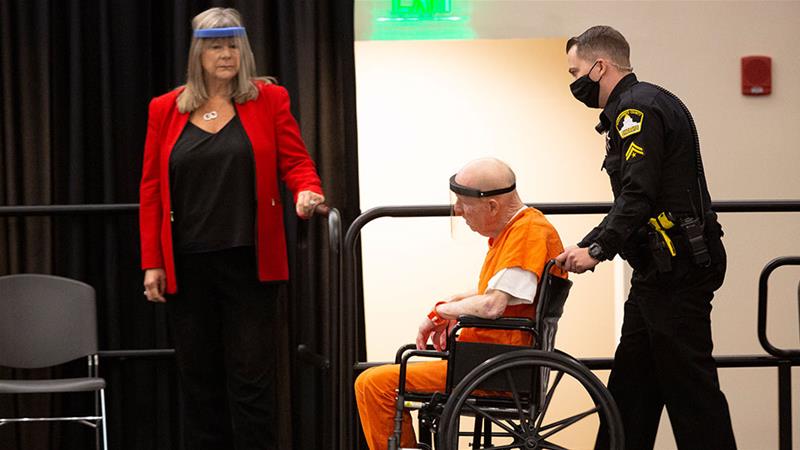 A former police officer who terrorised California as a serial burglar and rapist and went on to kill more than a dozen people while evading capture for decades pleaded guilty Monday to murders attributed to a criminal dubbed, “the Golden State Killer”.

Joseph James DeAngelo Jr had remained almost silent in court since his 2018 arrest until he repeatedly uttered the words “guilty” and “I admit” in a hushed and raspy voice as part of a plea agreement that will spare him the death penalty for a life sentence with no chance of parole.

DeAngelo, 74, had never publicly acknowledged the killings, but offered up a confession of sorts after his arrest that cryptically referred to an inner personality named “Jerry” that he said forced him to commit the wave of crimes that ended abruptly in 1986.

“I didn’t have the strength to push him out,” DeAngelo said while alone in a police interrogation room after his arrest in April 2018, according to Sacramento County prosecutor Thien Ho said. “He made me. He went with me. It was, like, in my head, I mean, he’s a part of me. I didn’t want to do those things. I pushed Jerry out and had a happy life. I did all those things. I destroyed all their lives. So now, I’ve got to pay the price.”

“The scope of Joseph DeAngelo’s crimes is simply staggering,” Ho said. “Each time he escaped, slipping away silently into the night.”

DeAngelo began on the police force in the San Joaquin Valley farm town of Exeter in 1973, where he is believed to have committed his first break-ins and first killing.

After three years on the force, DeAngelo moved back to the Sacramento area, where he got a job with the Auburn Police Department in the Sierra foothills. He held that job until 1979 when he was caught shoplifting dog repellent and a hammer – two items that could be of use to a burglar.

The guilty plea and life sentence avoided a trial and even a planned weeks-long preliminary hearing. Victims will be able to confront DeAngelo at length during an August sentencing expected to last several days.