Home » World News » Getting the Best Out of Thick Asparagus

Getting the Best Out of Thick Asparagus

When I was a kid, my father planted asparagus in a sunny corner of our Brooklyn backyard.

He was an optimistic urban gardener, despite a long list of failed crops: apricots eaten by rogue squirrels; corn that withered in its husk; white eggplant that might have been the first grown in Flatbush had they not succumbed to blossom-end rot.

But the asparagus survived, for a few years anyway. Come spring, as soon as the first skinny stalks peeked out above the ferns, we cut and ate them slathered in butter and lemon. Sweet, crisp and very juicy, they were completely unlike the fat ones my parents would get at the store, with woody stems that needed peeling before their stint in the dedicated asparagus steamer. 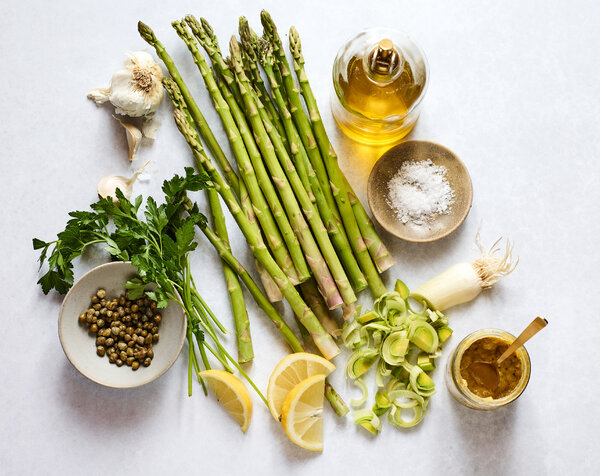 The deliciousness of our skinny homegrown spears made me wrongly believe that thin asparagus was superior to thicker asparagus. For years, I turned up my nose at anything wider than a knitting needle.

And that was my loss. What made our Brooklyn asparagus so good wasn’t its size, but its freshness.

Which is to say, both thick and thin asparagus have their places in the kitchen, and the fresher they are, the better. The tips should be tightly closed and flat against the stalks, like rosebuds before they even think about opening into flowers. The bottoms of the stems should be satiny and plump, without browning or obvious dehydration. When they’re truly fresh, you don’t even need to peel the fat ones. (Never peel the skinny ones, or there won’t be anything left to eat.) Just snap or trim off the tough ends, give them a rinse, and they’re ready to go.

Thicker asparagus are especially wonderful roasted, so the tips crisp and the flavors condense. In this recipe, they have a distinct advantage over their pencil-thin cousins: They’ll roast in the same time it takes slivers of leeks strewn on top to turn golden brown.

I also threw some capers in the pan for a briny character that contrasts all the leek-and-asparagus sweetness. Capers also make an appearance in the mustard sauce served alongside, which adds a tangy, mayonnaise-like richness to the plate.

My parents served asparagus as a first course all by itself, or alongside the brisket at our Passover table. As we knew from our short-lived garden patch, there are few vegetables more evocative of spring.