Ben Rich, speaking on BBC Breakfast this morning, warned there could be some “possible thundery” weather conditions throughout the country, though particularly in the northern areas, as a weather front makes its way across the UK from the west. While the worst of the torrential rain has passed, Mr Rich said to expect “bursts of sharp showers” as well as the odd “sunny spell”. Heading into next week, Mr Rich said, it will be a wet start to the week but the sun will head in for the remainder, with temperatures expected in the mid-twenties.

Mr Rich said: “There will be sunny spells, yes, but that is not the whole story. Wind and rain for some of us in the forecast, particularly up towards the north west of the UK, thanks to this little frontal system.

“It is pushing its way [across the UK] and bringing with it some outbreaks of pretty heavy thunderstorms and rain at times. Some brisk wind here, as well.

“The further south and east you are here, well it is a decent start to the day but we do have a few showers across western parts of England and Wales.

“Through the day, this band of rain, some of it heavy, possibly thundery, will drift through Scotland and Ireland, down into the far north of England, through Cumberland and Northumbria as we go into the afternoon. 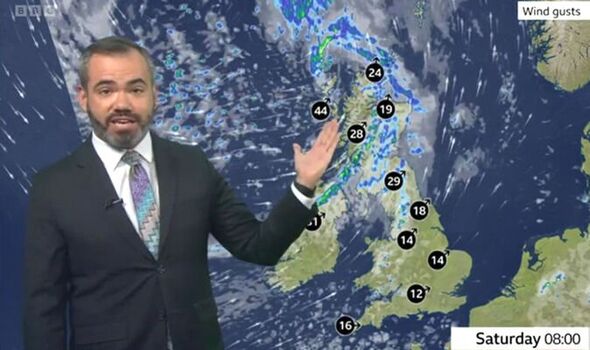 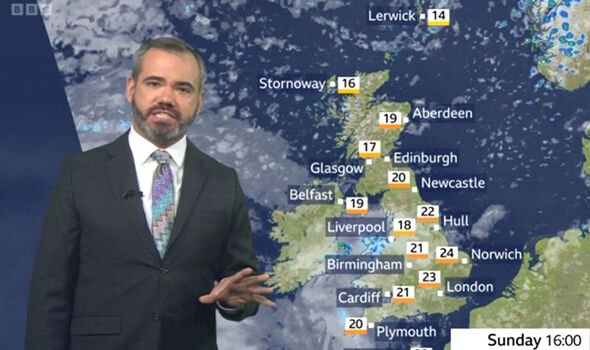 “South of that, it will be sunny with the odd spell of showers. Temperatures of 24 and even 26 degrees in parts of England.

“To the north of our rain band, it will be brightening up for much of Northern Ireland and Scotland although there will be some heavy showers hitting the north west.

“And it stays quite windy today for most of us. Now, tonight, our band of rain sinks southwards. It tends to weaken but there could be bursts of sharp showers through the midlands.

“Some differences with tomorrow compared to today. Sunnier than today across the north of the UK but cloudier across southern areas as this frontal system approaches from the Atlantic. 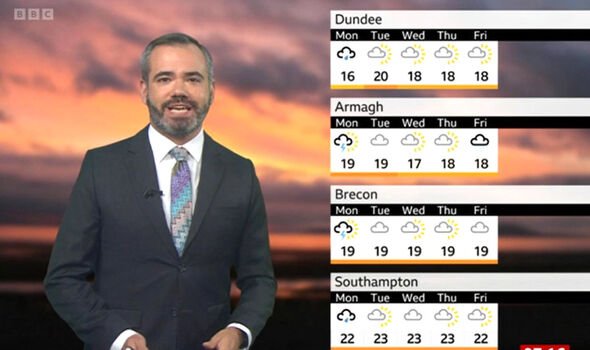 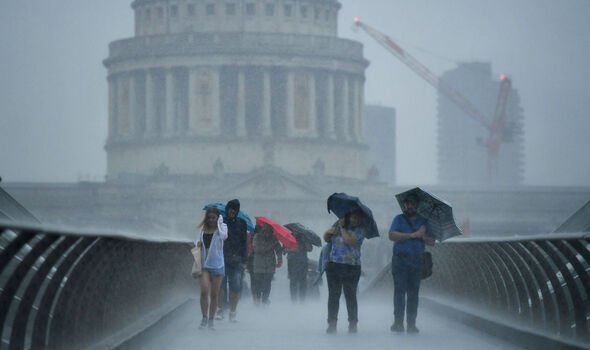 “Now, it is quite a slow approach. Still a little bit out to the west on Sunday morning, so some of us are getting off to a fine start with some showers here and there but certainly across Wales and southern and western parts of England, we will start to see clouds rolling its way in with some splashes of rain by the afternoon.

“Many places will be dry. Northern Ireland and Scotland will see some good spells of sunshine, just the odd rogue spell of showers, 17 degrees there in Glasgow and perhaps a high of 24 degrees in Norwich.

“Then as we look further ahead, this frontal system will eventually work its way through the UK. That is going to bring some quite heavy rain in places, including in places where we do really need it.

“So, perhaps a wet start to some at the start of the working week but actually, the rest looks dry for the most part. Temperatures around the high teens in the north of the UK and perhaps around the mid twenties further south.” 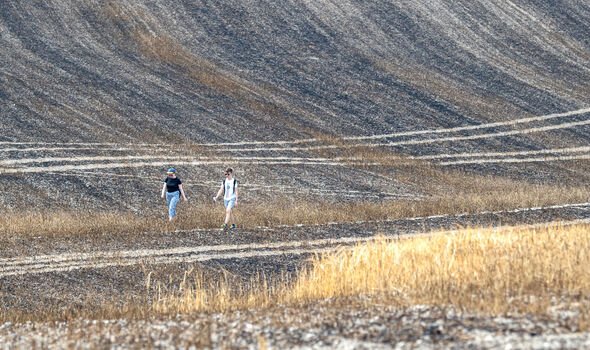 It has been a turbulent few weeks of weather for the UK as the nations have battled at least two heatwaves, a subsequent drought and then torrential thunderstorms earlier this week.

Counties across the UK have initiated drought protocols as the record-breaking temperatures of late have left water shortages.

The extreme weather at the start of this week failed to compensate for the heatwaves as the ground had been baked too much to absorb the torrential downpour.