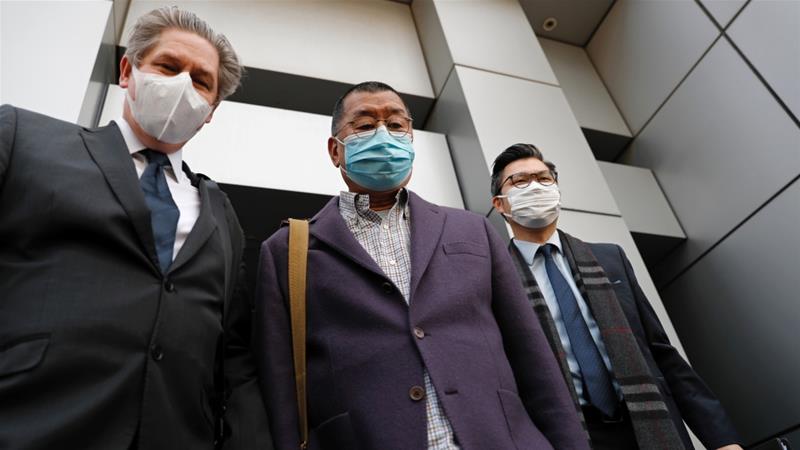 Police in Hong Kong have arrested at least 14 pro-democracy activists in connection with the mass protests that rocked the Asian financial hub last year.

Among those targeted on Saturday was media tycoon Jimmy Lai, founder of anti-establishment tabloid Apple Daily, who was arrested at his home, according to local media reports.

The group also included former legislators 81-year-old Martin Lee, Albert Ho, Leung Kwok-hung and Au Nok-hin, who are accused of organising and taking part in unlawful assemblies in August and October, according to several current Hong Kong legislators. In all, nine former legislators were arrested.

Lee is a prominent Democratic Party founder and senior barrister, who is known as the founding father of Hong Kong’s democratic movement as well as one of the architects of the city’s Basic Law, the mini-constitution under which Hong Kong returned to Chinese rule in 1997.

Lai was also arrested in February, along with veteran activists Lee Cheuk-yan and Yeung Sum, over their involvement in a mass anti-government demonstration on August 31 last year.

Al Jazeera’s Divya Gopalan, reporting from Hong Kong, said the police will be releasing a statement to give more details about the latest arrests.

“But, according to one of the those legislative councillors who has been arrested, he posted on social media saying that it is most likely due to their involvement in protests in the past year, particularly the one on August 18 which was against Hong Kong’s extradition law that has been removed since,” she said.

The raids mark the biggest crackdown on the pro-democracy movement since the outbreak of large and sometimes violent anti-government protests across the former British colony in June last year.

Marchers initially targeted a now-scrapped bill proposing to send suspects to mainland China for trial but protests broadened into demands for full democracy and a public investigation of the use of force by police.

Democratic legislator Claudia Mo, who was not among those arrested, said the government, led by Chief Executive Carrie Lam, was trying “to introduce a ring of terror in Hong Kong”.

“They are doing whatever they can to try to silence, to take down, the local opposition,” she said, pointing to upcoming legislative elections in September in which democrats hope to win back their former veto power in the city assembly.

The pro-democracy protests and movement has recently died down, partly due to exhaustion and arrests but also because of the coronavirus pandemic.

Hong Kong’s autonomy has been a point of renewed concern after Beijing’s top office in the territory said it has the right and responsibility to be involved in the city’s affairs.

But on Friday, Beijing’s top office in Hong Kong said it was not bound by Hong Kong’s laws and therefore has the right to “supervise” how the “one country, two systems” principle is being implemented.

The unprecedented statement came after the liaison office accused opposition politicians of abusing their power in the legislative council.

Al Jazeera’s Gopalan said the crackdown was “very timely” since it will not spark much reaction amid the lockdown restrictions.

“This is a particularly useful time for them to do it because people are not allowed on the streets and are not allowed to protest and the pro-democract camp basically says that this is government’s attempt at completely shutting down any democratic movements in the city.”

China’s leaders have refused to accede to the protesters’ demands, which include fully free elections in the city of more than 7 million, an inquiry into alleged police misconduct during the protests and an amnesty for more than 7,000 people arrested during the movement. 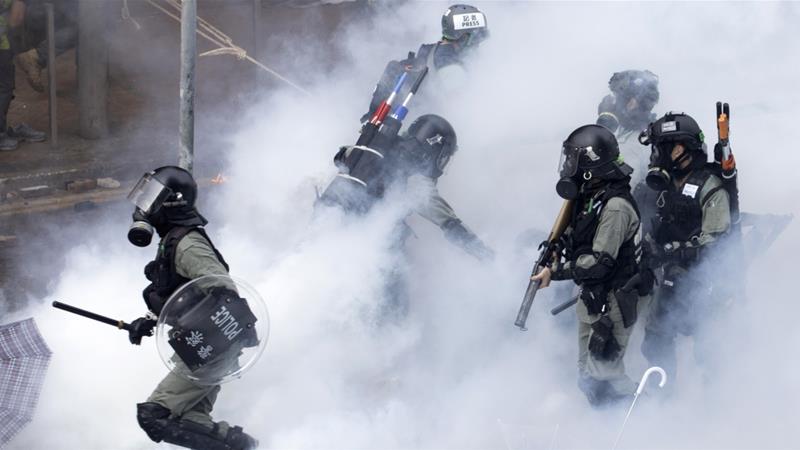 Why are people protesting in Hong Kong? | Start Here