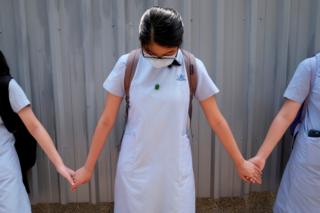 Students in Hong Kong are now banned from any political activity in schools including singing, posting slogans and boycotting classes, the territory’s education minister has said.

Some 1,600 were arrested for joining the sometimes violent demonstrations.

The order comes on the same day that a new national Chinese security office opened in the city.

The office is one element of a sweeping new law that makes inciting hatred of China’s central government and Hong Kong’s regional government illegal.

The law has caused alarm in Hong Kong, with opponents saying it erodes the territory’s freedoms as a semi-autonomous region of China. But officials say it will restore stability after violent protests.

Hong Kong’s sovereignty was handed back to China by Britain in 1997 and certain rights were supposed to be guaranteed for at least 50 years under the “one country, two systems” agreement.

Last year hundreds and thousands protested for weeks in Hong Kong against an extradition bill that critics said undermined the city’s special status.

The anti-government movement’s demands broadened to include full democracy and an inquiry into police brutality.

In schools many children expressed their support for the demonstrations by drowning out the Chinese national anthem with protest song Glory To Hong Kong.

Mr Yeung said the song Glory to Hong Kong was “closely related to the social and political incidents, violence and illegal incidents that have lasted for months,” according to Reuters news agency.

“Schools must not allow students to play, sing or broadcast it in schools,” he said.

Last week pro-democracy books were removed from public libraries, and authorities say they will be reviewed to see if they violate the new law.