‘I lost my mum to coronavirus on Mother’s Day’ 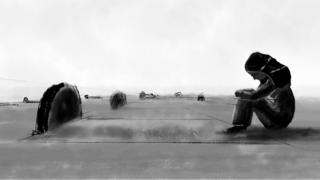 In the weeks leading to Mother’s Day, 33-year-old Aya (not her real name) was preoccupied with which gift to get her mum. Little did she know that she would be burying her instead.

Although Egypt announced the presence of Covid-19 in mid-February, it was not until the first week of March when the country started seeing new cases regularly.

So far, more than 1,500 people in Egypt have been infected and at least 103 have died with the disease.

Even though her mother had been poorly for a week, Aya never thought this would be the end.

She recalls collapsing upon hearing the news.

“I told my brother he was lying. He told me earlier that she was getting better,” Aya says.

“We were hoping that she’d be back home in time for her birthday in April, since she’d been admitted to hospital a few days before Mother’s Day. We were going to combine both celebrations.”

Aya’s mother was taken to a quarantine hospital in Helwan district, south of Cairo, one day before her death after testing positive for Covid-19.

The 69-year-old had been at a private hospital since Monday of that week, when she first tested negative for coronavirus before repeating the test a couple of days later, Aya says.

“The last time I spoke to her was on Tuesday… I was with my dad all the time as he had a coronary stenting procedure on Sunday.”

Not being able to say goodbye was not the only challenge for Aya.

On the same day of Aya’s mother’s death, all prayers and sermons were suspended across the country. All mosques were ordered to shut down as well.

So, Aya found herself forced to perform the funeral prayers inside the hospital’s mortuary.

The process of getting her mother’s body out of the hospital took a long time, so they only managed to bury her at night, she says.

“Very few family members came. We were all wearing masks and gloves. My sister-in-law held my hand and whispered: ‘I want to hug you but I can’t’. My brother’s mother-in-law was devastated. But none of us could comfort the other.”

“My dad couldn’t say goodbye to mum as well. He attended the burial but he hadn’t seen her for a week”.

After her mother’s death, Aya’s father was admitted to the same quarantine hospital, as he tested positive for Covid-19.

“When he left, I lost it. I kept wailing on the floor,” she says.

Her father made a recovery and returned home this past weekend.

Although neither Aya nor her brother tested positive, they both had to stay in isolation.

“As a family, we couldn’t even be there for each other.”

‘My mum is a martyr’

Realising the challenges faced by those who have lost loved ones, Rana Sameeh created a WhatsApp group with the aim of circulating the names of those who have died so that people could pray for them.

Rana, a 31-year-old engineer, collects these names from social media posts. Also, some of those who have lost loved ones reached out to her asking to include the name of their deceased relative in the group’s list.

There is more than one Hadith (sayings attributed to the Prophet Muhammad) that speak about the value of having a large number of people participating in the funeral prayer.

Rana’s WhatsApp group was created on 24 March and in few days it reached the maximum number of members allowed by the app: 256.

Ramy Saad set up “Salat al-Ghaib”, which translates as “absentee funeral prayer”, after seeing a picture of a small group of people praying in the street in front of a coffin.

Usually, many people would take part in such prayers.

“It was a very sad scene. So, I decided to do something about it,” Ramy, a 30-year-old entrepreneur, says.

The group was also created on 24 March and attracted over 4,000 followers in just 10 days.

Aya says the virtual groups started out as to get more people to pray for lost loved ones, but they have become much more than that.

“I received many condolence messages from people I don’t know when they read about my mother’s death on Facebook… a fourth-grade classmate even called me to offer his and his mother’s condolences. I didn’t remember him at first.”

This support, Aya says, has helped her through her grief.

“This ordeal makes my mum a martyr. I believe in this and this gives me strength, which I didn’t know I had in me. Had she died under normal circumstances, I would have completely collapsed.”